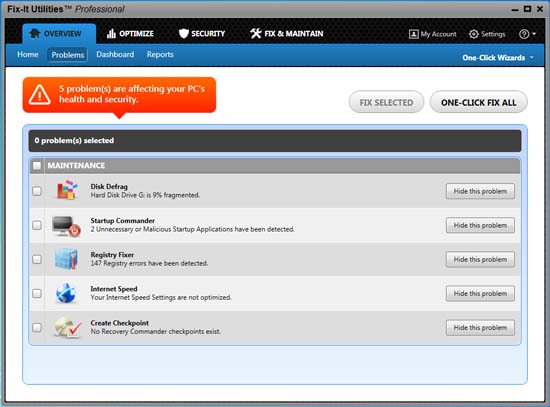 Assuming the AV installation problem can be fixed, Fix-It Utilities 15 Pro might be a good way to protect your PCs from the threats and system slow-downs often seen as Windows machines age. The addition of the ability to remotely control PCs where Fix-It is installed is useful. Avanquest offers a generous 5-PC licence. The ease of use and overall ratings reflect the fact we couldn’t get the AV components to install.

Fix-It Utilities is probably the best known of all Windows PC maintenance and tune-up utilities. Originally created by VCom, now a subsidiary of Avanquest, the latest version of Fix-It Utilities Pro 15 includes protection and security services, with remote control of PCs via an online dashboard. See also Disk tools/Optimisation reviews.

If Fix-It Utilities Pro 15 spots existing anti-virus  software while it’s installed, it leaves it alone and doesn’t install its own. This approach includes Microsoft Security Essentials (MSE), rather than offering to replace it as some other Windows security software offers to do.

So we removed MSE from our PC in order to try Avanquest’s anti-virus interface, but repeatedly saw a CRC error on installing Fix-It. We couldn’t get the software to run with its AV component intact, even after repeated attempts.

The core of the program is still a suite of utilities which are aimed at speeding and securing up to five PCs.

They’re divided into three categories within the program: Optimize, Security and Fix & Maintain. All three can be approached via their own One-Click fix buttons and there’s a separate one in the Overview tab which takes pretty much all thought out of the process.

If you want to be a bit more selective in your tuning, Optimize and Fix & Maintain include over 20 individual routines between them, for things like defragmentation, Registry cleaning, space and data recovery. You can use them in any combination to address the parts of a system which might be out of sorts.

Some of these applets are very detailed in their own right and you may need in-depth knowledge to use them sensibly and safely.

For example, the Windows Optimizer offers over 150 options under headings like startup, networking, Internet Explorer and the Aero interface.

The key new features within the suite are mainly aimed at the more cloud-centred environment we live in. There’s a new online dashboard where, once you’ve set up an account, you can view all your PCs and devices covered by the licence and initiate Fix-It analysis and repair on them.

You can become a support engineer for other members of your family, even when you’re not there – think of the fun. Actually, remote access can be very useful if you’re tasked with keeping spouse and children online.

New ‘mobile device protection’ in the suite involves downloading a separate iOS or Android app, which gives remote access to your PCs.

Avanquest claims the AV scan times have been improved, although we weren’t able to test this. Nor do we know if the anti-malware component of the software can stop malware.

In other respects the mix of housekeeping and performance improvements remains similar to previous versions.