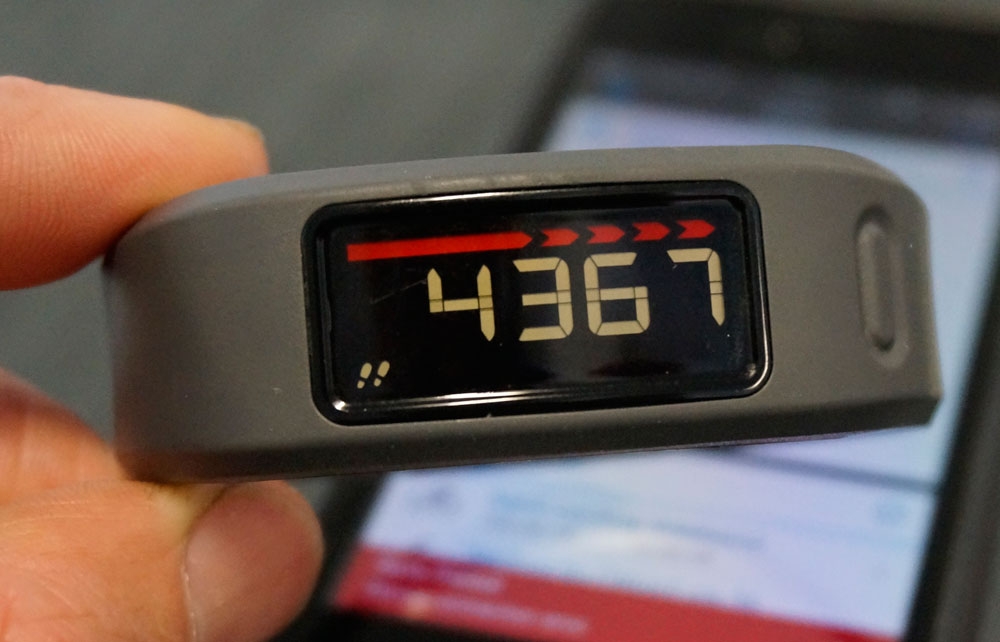 The Vivofit is a great activity tracker, but there’s still some work to be done on the software side of things. Also consider the Polar Loop.

Garmin is no stranger to the fitness game. In fact, we’re only surprised how long the company has waited before dipping its toes into the waters of the activity tracker scene. The new Vivofit is available on its own or with a heart-rate monitor. Is it the right one for you? Find out in our Garmin Vivofit review.

For a first-generation product, the Vivofit wristband is a good all-rounder, but it hasn’t got the likes of Fitbit beat just yet.

Garmin Vivofit review: what does it track?

As well as the obvious steps, distance and calories, the Vivofit also tracks sleep. It also shows the time and date and – crucially – can display your heart rate when you’re wearing a compatible ANT+ monitor.

This makes it much more attractive to anyone who wants to more accurately track calories burned: the vast majority of other activity trackers estimate calories using only an accelerometer, which detects movement. A heart-rate monitor, meanwhile, allows the Vivofit to provide a much more accurate estimate since it knows how intense is your exercise.

What the Vivofit lacks is an altimeter, so it can’t track how many flights of stairs you’ve climbed, for example. That’s unlikely to bother too many people, but it’s worth noting.

As we’re talking about features the band doesn’t have, there’s no alarm function, so you can’t use it to silently wake you in the morning as you can with a Fitbit Flex, Force or One (or a Jawbone UP).

Finally, there’s no GPS. That’s no surprise since no other activity tracker does, but you may have expected GPS if you own a Garmin Forerunner.

The Vivofit is a cross between the Nike Fuelband and Fitbit Flex in terms of design. The display is a non-backlit LCD, and you press a button to cycle between the functions. Using the companion app (more on that later) or website, you can enable or disable the display of several measurements to make it quicker to cycle through them.

So, a lot like the Fuelband. But, in the box you’ll find two wristbands, just as you get with a Fitbit Flex. The Vivofit pops in and out of these fairly easily, but you’ll pick the one that’s the best fit and stick with it. The clasp is exactly the same type as Fitbit’s, and never came undone during our testing.

The display is easy to read in just about any light, but obviously can’t be read in the dark. There’s a red bar which grows at the top but, unlike the Fuelband, this doesn’t chart your progress towards a daily goal. Instead, it grows with inactivity, motivating you to go for a walk to make it shrink and disappear.

A neat touch is that as well as a total step count, the band also shows how many steps are left to reach your goal. Once you’ve reached it, it counts up again from zero, with a GOAL+ logo at the bottom.

Interestingly, the default is an automatic goal. Instead of a fixed 10,000 steps (or whichever figure you set), the Vivofit begins with a relatively easy target of around 5,000. If you achieve this, it increases the goal slightly the following day. If you smash the goal and walk 10,000 steps, the figure increased by a higher percentage the next day until you reach around 15,000 steps at which point it won’t go too much higher.

By contrast, if you don’t reach the goal, the next day’s challenge will be easier. It’s a system that works really well.

If you’ve paired the Vivofit with a HRM, you’ll also see Heart as you cycle through the functions. If you leave the band on this function, it starts recording a new session and your heart rate will be displayed, along with a zone number (which you can configure in the app or web interface).

The band is water resistant to 50m, which means you don’t need to take it off when swimming or having a shower. It won’t track lengths as a dedicated swimming watch will, though.

Currently you have a choice of black, grey, teal, purple and blue bands, but the device itself is black. If you search around online, you can pick up the Vivofit for £90, but if you want the heart-rate monitor as well, it’s £130 – not a bad deal.

As with most Bluetooth LE devices, you’ll need a compatible iPhone or Android smartphone to synch data from the Vivofit. Alternatively, you can use the included USB ANT+ (not Bluetooth) adapter and synch wirelessly with a laptop, PC or Mac.

In both cases, synching is a manual affair, so you have to hold the band’s button until Sync is displayed. Having got used to the all-day synching of a Fitbit, I found this slightly annoying and often forgot to synch for several days at a time.

The good news is that because it isn’t constantly using Bluetooth or lighting up its display, the disposable batteries should last for a year! That’s especially good if you’re like me and ignore low-battery warnings and end up walking around with a dead tracker for a day or two. That simply won’t happen with the Vivofit and there won’t be regular ‘holes’ in your data.

Although it’s impossible to say which activity tracker is 100 percent accurate (no-one can accurately count the number of steps they take each day for reference), the Vivofit broadly agreed with my Fitbit One – which I consider accurate – over a week of testing. In all but one day, the two were within 7 percent of each other over an average of 10,000 steps. The only time they disagreed was on Saturday when the Vivofit said I managed 7274 steps and the Fitbit claimed 9006.

Where the Vivofit falls down is the basic nature of the app. It’s not the worst I’ve seen by any means, but it doesn’t give you all the data you might want.

In fact, the app isn’t unique to the Vivofit. Instead, Garmin revamped its existing Connect app to add support for the Vivofit, but it will also work with Garmin’s GPS watches.

The main screen shows your steps, distance and calories for that day, plus the steps goal. Below that is a list of recent activities uploaded to the Gamin Connect website.

Tap Details and you can see a bar chart showing when those steps were taken throughout the day. At the top you can change the view to see a whole week, month or even year. The latter three show totals for steps and distance for the period chosen, along with daily and weekly step averages.

What you can’t see (as it’s available only on the Connect website) is a ‘Breakdown’ tab showing the percentage of your day that was Highly Active, Active, Sedentary or Sleeping.

Scroll down below the Activities list and Sleep will appear. Tapping on Details brings up a graph showing how long you slept. The Vivofit can try and guess when you’re asleep based on movement (and the sleep and wake times you set in the app), or you can hold down the button until Sleep appears on the display.

In either case, the graph isn’t particularly useful. Unlike other fitness trackers which give you more detail, such as light sleep and deep sleep (or asleep and awake periods), the Vivofit’s graph simply displays the movement detected. You can look at this and easily tally it up with how many times you woke (or not) in the night, but it feels like raw data.

A central pillar of an activity tracker (as far as I’m concerned) is the ability to compete with friends. Fitbit does this and Garmin hasn’t overlooked it either.

If anything, Garmin does it better, since you can see how you compare not just on steps (as Fitbit does), but also on running, cycling and swimming. Of course, the Vivofit isn’t going to help you out with your cycling or swimming stats, but it will do walking and running.

One of the things I haven’t yet touched upon is third-party integration. Fitbit and – to some extent – other manufacturers allow you to use other apps or products to track what you eat and drink and monitor your weight with Wi-Fi scales.

You can’t do any of that with the Vivofit (yet) and that will be a barrier for some people. There’s a lot to be said for buying into a ‘mature’ system such as Fitbit’s, and more chance of finding friends with whom to compete.

However, the Vivofit hardware is excellent. It can replace your watch (albeit without an alarm) and isn’t so bulky that you have to take it off when wearing, say, a dress shirt.

Best of all, though, is the fantastic battery life. Instead of having to keep tabs on a proprietary USB charging cable (Fitbit), you can wear the Vivofit worry-free and it will cost only a couple of pounds to buy new batteries each year.

If monitoring your heart rate during workouts is a priority, your choice is really between the Vivofit and Polar Loop. Both cost the same when you include the heart rate monitor, and at £130, they’re arguably better value than a Nike Fuelband SE which can’t track your heart rate.

The Polar Loop is fiddly to set up, but once done, it’s a smart piece of kit that’s water resistant and has a cool red LED display. The app is better looking and, in terms of features, there’s not much to choose between the two. They both lack altimeters and vibrating alarms, and both can double as a watch.

Where the Vivofit wins is on battery life and the fact that you can’t read it in the dark won’t be a problem for most people.

Essentially, if you already have ANT+ or Garmin devices, it makes sense to get the Vivofit. If you have a Bluetooth HRM, the Polar Loop could be your best option. If you own nothing at all compatible with either band, it’s down to your personal preference, but the Vivofit’s long battery life is not to be underestimated.