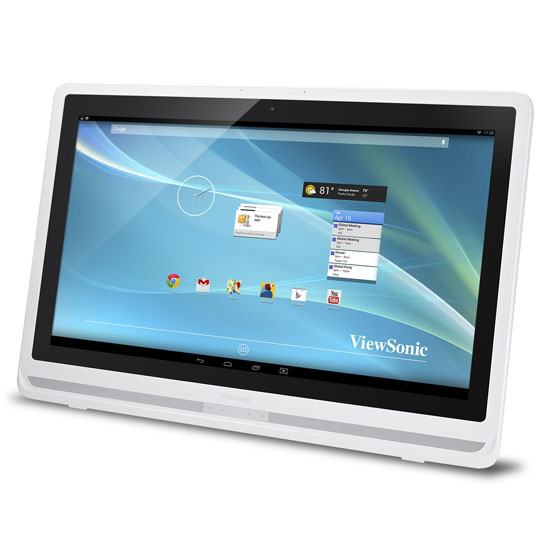 The ViewSonic VS241 could work as a simple computer for users who may lack computer literacy, especially for anyone who struggles with small mobile devices and needs a bigger screen. But really it is a jack-of-all-trades, and master of none that neither excels at being an all-in-one or a PC monitor. There are better alternatives for around the same £500 price, even Windows 8 all-in-ones that offer better performance; or you can get a higher quality standalone display for much less money. Android doesn’t work well at this screen size, apps look terrible and the hardware isn’t powerful enough to provide a smooth experience. The menus are fiddly, the build quality isn’t very high and it feels as though corners have been cut in order to squeeze basic tablet hardware into a PC monitor. We can’t recommend the ViewSonic VS241 when for the same money you could for example buy a cheaper, better display and a Nexus tablet, which would together perform a lot better.

The ViewSonic VSD241 is a dual-function display. It’s primarily a touch-capable 23.6in all-in-one desktop computer running the Android operating system, complete with audio, networking, storage and HD webcam, independent of any other device. See also: What’s the best display?

As with many Android tablets and smartphones, you can use it for email, Facebook, gaming, media playback and so on. It can also be used as an external 1920 x 1080 display for a PC, games console, TV set-top box or Blu-ray player.

As a touch-controlled display, with a touch-focused system like Windows 8, and at its price of £500 there are already dozens of low-end Windows 8 all-in-one PCs from the likes of Lenovo and HP.

Its design standards are not particularly high. The bezel is made from white glossy plastic, with a more textured plastic on the rear of the panel. The ports at the back are covered by a removable door, with a small hole at the bottom to feed cables through. At the very bottom are a pair of speakers that sound especially tinny, even by the standards of cheap computers.

Theres is one video input, a single HDMI port, and if you’re connecting a PC, you may need a DVI-to-HDMI adaptor.

DVI cannot carry audio, so to use the built-in speakers, you’ll need to use a 3.5 mm cable from your PC’s audio card. Any HDMI device should play sound directly through the VSD241’s speakers. With a PC connected, you can use the built-in SD card reader, webcam and touchscreen, but you’ll also need to connect a USB cable first.

Between the two speakers are five touch-sensitive control buttons, for switching video modes and navigating the on-screen display. The central button is the power switch, which seemed a bit too sensitive, since it’s easy to power off the VSD241 when reaching for a different control.

On-screen menus allow you to adjust the picture and choose from colour presets, including sRGB and a user preset. We found that with a Windows PC connected, the inage initially couldn’t reach the very edge of the screen, but an Overscan setting in the menu fixed this. But this then made the screen too large when we switched back to Android mode until it was reset again.??The Android hardware is based on nVidia’s Tegra 3 platform, with a quad-core ARM processor running at 1.7 GHz. There’s 1 GB of memory and 8 GB of built-in flash storage, and you can expand this limited storage with an SD card. After a software update, the VSD241 was running Android 4.2.1, about 18 months old and currently two version behind the latest from Google.

Unlike some vendors of budget Android hardware, ViewSonic must have signed licenses with Google to use all its services in order to provide full access to the Google Play store. Here you can easily download popular applications, with books, games and movie stores included as well.

Bundled software includes nVidia’s Tegra Zone and ES File Explorer. Many of the apps have a short tutorial that show when you first load them, explaining pinching, long presses and double tapping.

The on-screen keyboard on such a large display makes typing initially easier than on handheld mobile devices. That’s handy since no mouse or keyboard is included, although you can use Bluetooth peripherals if you prefer. However, as with any large touch-sensitive display, arm fatigue can become a problem, so we wouldn’t recommend writing essays using this large upright on-screen keyboard.

Judging the interface subjectivley, performance of Android is no better than passable. Graphics lag at times, such as when pinching to zoom-in on web pages and swiping between screens.

Graphics benchmark tests indicated poor performance – GFXBench results were particularly low with 214 points in the T-Rex section. That’s much lower than Android devices that are over two years old.

The huge gap between the capabilities of the VSD241 and modern Android smartphones such as the HTC One M8 or Samsung Galaxy S5 is highlighted by these phones score of around 2000 points in the same test.

In its favour, the ViewSonic as PC works okay for basic tasks, but we found that some apps simply don’t work on such a large display. Facebook thinks it’s running on a mobile device, and blows up pictures so they look terrible and occupy the entire screen.

Twitter is just as bad. In-line images are again blown up to silly sizes, and scrolling through tweets takes large arm movements to move down just one page, compared with the short finger flicks you’d use to navigate on a smaller tablet or phone display.

Similar problems arise in other apps too. These are problems inherent to the Android platform itself. In most cases, it’s better to just view the website in Chrome rather than wrestle with the Android app.

The VSD241 is more promising when used as a display, with measurements that are akin to a mid-range PC monitor. The colour reproduction, brightness and contrast levels aren’t terrible, but they’re nothing special either. We measured 97% sRGB, 72% NTSC and 75% AdobeRGB gamut coverage.

The brightness uniformity is reasonable, deviating by around 6% to the left of the screen, which is a better result than we expected. And its contrast of 640:1 is good, but 242 cd/m2 is a low maximum brightness level. Using our Spyder calibration tool, we recorded an average Delta E of 1.6, which is a very competitive result.

But these results tell only half the story. The picture is blurry, and leaves a lot of empty black space between the bezel and viewable area, even with Overscan turned on.

There’s only a single HDMI input, and the display doesn’t have a stand, just a small plastic rest at the back, which limits its movement. It can’t be rotated into portrait mode.