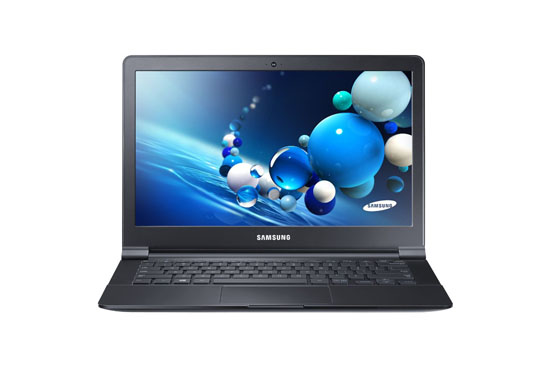 The Samsung Book 9 Lite certainly has its flaws – its low-grade display means limited viewing angles that would be unacceptable in anything other than a budget laptop. However, its performance is rescued by that solid-state drive, while its attractive slimline design and impressive battery life are unmatched by just about any other laptop in this price range.

Samsung’s Book 9 Lite has been around for a while now, and its original £600 price tag has now been cut to £499 on a number of web sites. It’s not a top performer by any means, but at that price it’s one of the slimmest and most elegant budget laptop currently available. (See: What’s the best budget laptop?)

Available in either black or white, the 13.3-inch Book 9 Lite measures just 17.4 mm thick, which puts it very much in Ultrabook territory. In fact, its tapered, slimline design shows that Samsung was once again ‘inspired’ by Apple’s design, this time the MacBook Air. It’s much heavier than the Air, though, at 1.6 kg, but is still slim and light enough to pick up with one hand and slip into a backpack.

The build quality is very good – the casing feels plasticky, but should be sturdy enough to withstand the occasional bump, and provides good support for the screen panel and a firm, comfortable keyboard.

Viewed from directly in front, the 1366 x 768 display of the Book 9 Lite appears bright and colourful. However, the viewing angles are severely limited – particularly horizontally, and the image darkens quite noticeably as soon as you tilt the screen back by just a few degrees. Even so, it’s not quite the worst screen we’ve seen on a budget laptop, and the Book 9 Lite will still work pretty well for web browsing and streaming video. The speakers do their bit too, producing a clearer, fuller sound than many low-cost rivals. (See also: What’s the best laptop?)

Performance is something of a mixed bag, though. Samsung is oddly coy about the processor used in the Book 9 Lite, referring to it only as a ‘quad-core processor’. Closer examination reveals this to be an AMD A6-1450 running at 1.4 GHz. The Book 9 Lite is also equipped with 4 GB of memory and most remarkably, an SSD that provides 128 GB of solid-state storage. The latter adds just enough of a performance boost to achieve a score of 2200 points when running the PCMark 7 benchtest, despite the slow CPU.

That’s very much an entry-level performance figure, but the solid-state drive helps transform the Book 9 Lite into a laptop that feels quite snappy and responsive. It wakes from sleep with barely a pause to gather its thoughts, and responds smoothly to the touch-screen controls. That modest processor is also relatively power-efficient, and the Book 9 Lite lasted for a full 6.5 hours when streaming video off the BBC iPlayer – an outstanding performance for a laptop in this price range, especially given it has the smallest battery.