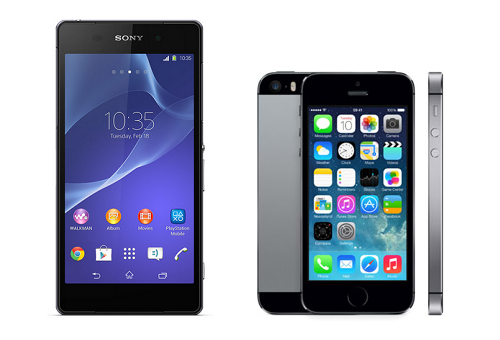 There’s little in it between the iPhone 5s and Sony Xperia Z2 since both have top-end hardware and performance. The question is really do you want a small smartphone with iOS and a fingerprint scanner or a big waterproof one with Android? Yes, my verdict is a question.

The smartphone market is one of the most hotly contested in technology so it can be difficult to know which device to invest your money in. Here we compare Apple’s flagship  iPhone 5s with the new Sony Xperia Z2. (And now there’s an Xperia Z3 on the way, so keep that in mind before you buy.)

Although Sony’s official price for the Xperia Z2 is £499, it can be purchased for less elsewhere. Most retailers have it listed at £540-550 placing it at the same level as the iPhone 5s which costs £549 for the cheapest model.

It’s worth pointing out that there is only one model of the Xperia Z2 while Apple’s smartphone is available in difference capacities – see the storage section for a closer look.

With pricing looking pretty well matched, read on to find out how the iPhone 5s and Xperia Z2 differ.

Little and large is a good way of describing the difference between the iPhone 5s and Xperia Z2 in terms of design. The iPhone is still much smaller than Android flagship devices with its 4in screen.

Both handsets use a combination of aluminium and glass, with each offering a premium feel. A key difference is that with Sony, you get dust- and waterproof capabilities so is more suited to the outdoors type of user or if you want to take photos underwater.

The Xperia Z2 is on the unwieldy side of things and it weighs a lot at 163g; the iPhone 5s weighs just 112g in comparison. The iPhone 5s is smaller and lighter, but it’s more delicate than the Xperia Z2 and will need a case if you want to keep its original looks.

Colour options are important so the Xperia Z2 comes in black, white and purple while the iPhone 5s is available in space grey, silver and gold.

The significant size difference between these two smartphones is due to their screens. The iPhone 5s has a 4in screen and the Xperia Z2 has a 5.2in alternative.

There are pros and cons to each so while the iPhone’s display is easy to use one-handed, the extra real-estate of the Xperia Z2 makes tasks like browsing the web and watching video easier and better. If neither of these sounds right for you, look for a device with a screen around 4.5in.

With a Full HD panel, the Xperia Z2 offers a higher resolution and pixel density to that of the iPhone 5s. The iPhone is no slough though and with a smaller screen, the resolution doesn’t need to be as high – its pixel density is still lower at 326ppi against 424ppi.

It sounds like a big difference but both screens are high-end so it’s more important to pick the size which will suit you better.

The iPhone 5s was the first smartphone to be equipped with a 64-bit processor and while Android phones are still waiting for the technology, the Xperia Z2 has a competent Qualcomm Snapdragon 801 under the bonnet.

Apple has one up on its rival thanks to the low-power M7 motion coprocessor which can count your steps, showing your performance with the Fitbit app.

We can look at clock speeds and amount of cores all day but let’s face it both these devices offer top-end performance.

As we mentioned earlier, the Xperia Z2 only comes in a single storage capacity, a very standard 16GB. The iPhone 5s also starts at this amount but you can buy 32- or 64GB models if you’re willing to spend more.

Sony’s counter attack in this area is a microSD card slot which can accept up to 64GB cards. This means it has the potential to have more space than the largest iPhone and at a lower expenditure. Apple has never decided to offer expandable storage.

With similar hardware hardware and performance on offer across the market, unique features are becoming more important to distinguish smartphones from rivals. The iPhone 5s’ unique feature is its Touch ID fingerprint scanner which means you can unlock the device without inputting a passcode. It’s embedded in the home button which is pretty cool.

In this comparison, the Xperia Z2 has its waterproof design and it also has stereo speakers (one driver at each end of the phone). Furthermore, it comes with noise-cancelling headphones (MDR-NC31EM) which are worth around £40.

You may also find the Xperia Z2’s built-in NFC chip useful which the iPhone 5s does not offer.

Sony hasn’t changed the camera in the Xperia Z2 compared to its predecessor so it keeps the 20.7Mp camera with Sony’s Exmor RS sensor. We like the fact there is a dedicated camera button since you’ll have to use the volume buttons on the iPhone 5s to take snaps if you want to avoid using the screen.

The camera is a force to be reckoned with and even though the iPhone is rated at 8Mp, its large pixels, backside illuminated sensor and dual-tone flash make for great photos and videos in different conditions.

For videos, both smartphones can shoot in slow motion and offer an HDR shooting mode for videos and stills. The Xperia Z2 has one up on the iPhone 5s because it can record (and output) video in 4k resolution (2160p).

Android and iOS is a big difference between these two and whether you’re already invested in one platform could help make your decision between them a lot easier.

We’ve reached a point where Android and iOS are the best and most popular mobile operating systems available – though you may well prefer Windows Phone, in which case don’t buy either of these.

Apple’s iOS 7 is a big change from the previous version with a flatter, more colourful look with better multi-tasking. Like Android, there’s a drop down notification bar and the Control Center gives access to settings like screen brightness, Wi-Fi and music playback. The App Store is excellent with developers putting high priority on the platform and the apps are both plentiful and generally high quality.

iOS has the advantage of simplicity and app support while Android has the benefit of customisability and openness – it still has a good app store and high priority for developers but apps are more hit and miss. The thing about Android is that the experience will vary depending on which manufacturer you pick since there is the culture of using customer interfaces, also known and skins or overlays.

The Xperia Z2 comes pre-loaded with the latest version of Android, 4.4.2 KitKat and Sony’s user interface still looks much the same as is it has done in the past. It’s stylish, easy to use and comes with a good amount of decent wallpapers, widgets and the like. There’s certainly nothing majorly wrong with it but there’s arguably a lack of extra features – Sony keeps things simpler than HTC, Samsung and LG.