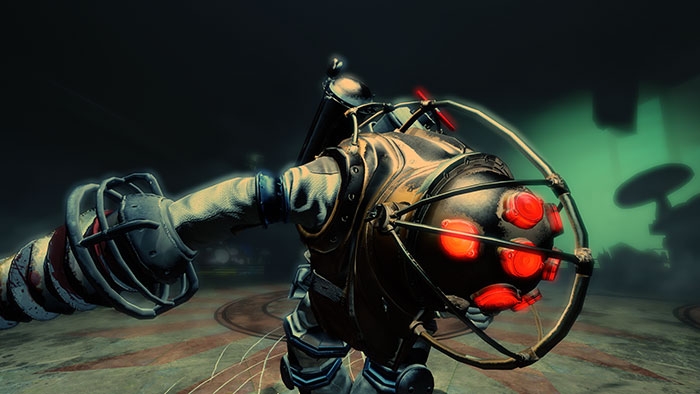 BioShock Infinite: Burial At Sea – Episode 2 gets a bit carried away with itself in terms of narrative, but the new stealth options are a beautiful addition. This is incredibly ambitious as far as DLC goes, and while it might not quite reach the heights of the original game it certainly ends the series as we know it on a relatively high note.

After seven years of questions, seven years of mystery, seven years of building some of videogames’ most iconic worlds, it all comes to an end. The BioShock series will inevitably continue in some form from another studio, but its original creators have stepped down and disbanded, leaving this final, extensive piece of singleplayer DLC for BioShock Infinite to finish up their story of two impossible cities.

For the most part, Burial At Sea Episode 2 is set in Rapture, the underwater, Big Daddy-inhabited fallen utopia from the original BioShock, but it intertwines with BioShock Infinite’s similarly corrupted city in the sky, Columbia.  In a change of pace for both games, you don’t play as a brawny man with a gun, but rather former supporting character Elizabeth, who despite having the option of guns is more suited to stealth. This too is a change for the traditionally all guns blazing BioShock series, which to date had little truck with hiding and sneaking.

It turns out to be a great fit, at least in the more horror-tinged Rapture sections. The underwater city’s remaining inhabitants are mutated and monstrous, whereas Columbia’s are simply human, so there is a natural inclination to avoid them and their psychotic jabbering.  The new stealth systems are fairly rudimentary compared to out and out stealth games, and enemies’ abilities to spot you is a bit all over the place, but it works, it makes thematic sense and ups the tension.

The option to not take life (clubbing someone into unconsciousness with a surprise Skyhook attack might still be pretty brutal, but at least it’s not fatal) is particularly welcome, and even overdue, given this is a series whose stories have extensively explored morality and consequence.

New Plasmid powers support playing stealthily – a limited x-ray vision mode, temporary invisibility, one that causes alerted enemies to forget they’ve seen you… Burial At Sea 2 is remarkably ambitious for mere DLC, but it’s bittersweet that these great and very natural-feelings additions to the BioShock formula only arrive for the three to four hours of this list hurrah. 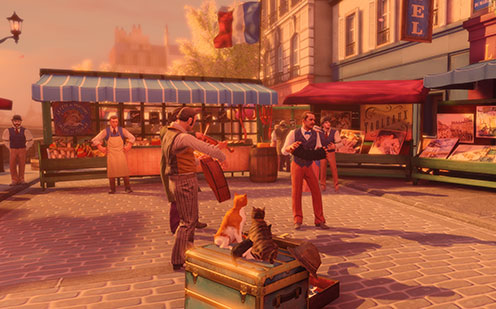 The other major purpose of Burial At Sea 2 is provide an absolute ending for BioShock Infinite, and to tie it inexorably into the original BioShock, despite its being set in a different time period and version of reality. Little can be said in this regard without honking great spoilers, but suffice it to say it’s a mixed bag. When the story reveals tragic similarities between Columbia and Rapture’s strange creatures and conscience-free leaders it can be very powerful, but when it reveals overt links and co-dependencies it can feel forced and unnecessary.

There’s also an ill-judged attempt to retroactively justify one of the more controversial events of BioShock Infinite which sadly comes across as trying to shoot down criticism after the fact rather than at all convincing.

It’s an odd thing, it really is. There’s a clear aspect of trying to close every door so that whoever next might be handed the BioShock franchise is shut out from using anything in the series so far, and to some degree it feels artificial, trying to forcibly insert links and answers where none were needed. The late-game dive into cut scene-led drama and exposition also means that the exciting new stealth stuff is abandoned just as it really starts to sing too.

It’s without doubt a worthwhile and often fantastic experience, though. As well as introducing a whole new way to play BioShock, this is uncommonly beautiful, packed with amazing sights and tiny, smart details. While it adds both highs and lows to BioShock’s legacy, Burial At Sea Episode 2 most certainly goes far beyond what we’re used to seeing from DLC.