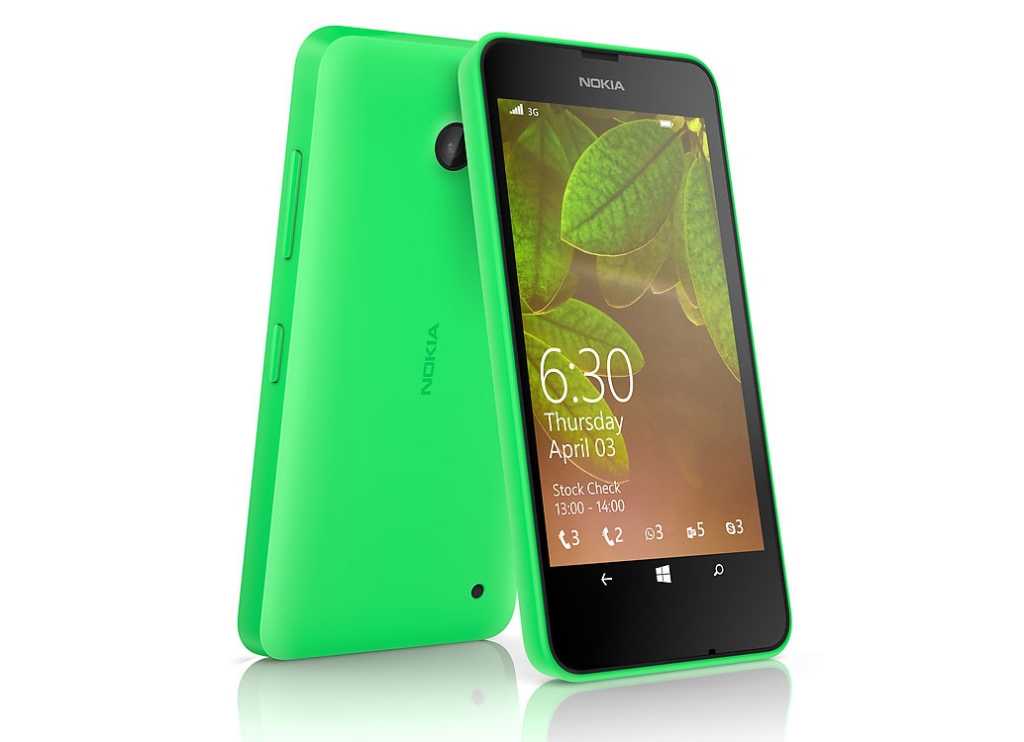 If you’re considering the Lumia 630 as a first smartphone and you don’t plan to buy lots of wireless accessories and install lots of apps, it’s not a bad choice at all. Windows Phone 8.1 is very easy to use, and will improve even more when Cortana and its associated features arrive in the UK. However, the sticky problem of a lack of apps in Microsoft’s store remains an issue for all Windows Phone 8 smartphones, and the lack of a front-facing camera is a problem if you want to use Skype. Note that the Lumia 635 is the model with 4G support.

The Lumia 630 is the first smartphone to launch with Windows Phone 8.1. This is a fairly major software update which includes many new features, although some such as Cortana won’t be made available in the UK until much later this year. Here are 30 funny commands you can say to Cortana

See also: how to get Windows Phone 8.1 and Cortana right now

We’ll get to the software shortly, but the 630 itself is all about price. You can buy the smartphone outright for just £129. There are some compromises though, notably the lack of 4G support, and there’s plenty of competition from budget Android smartphones including the forthcoming 4G version of Motorola’s Moto G. The identical-looking Lumia 635 supports 4G and is finally on sale – it costs £20 extra at £149 (SIM free).

Arguably, the 630 is the successor to the ever-popular Lumia 520 (see our Lumia 530 vs 520 review). This is because the forthcoming Lumia 530 is, if anything, a downgrade from the 520, so it’s essentially a new even more entry-level Windows Phone 8 handset.

With its removable plastic rear shell – similar to previous Nokia smartphones – it’s easy to change the 630’s appearance according to your mood. If black is too sombre, there are yellow, orange and green shells which cost £13 each from Microsoft’s online store.

The front is covered with Gorilla Glass 3, with cutouts at the top and bottom for the earpiece and microphone. 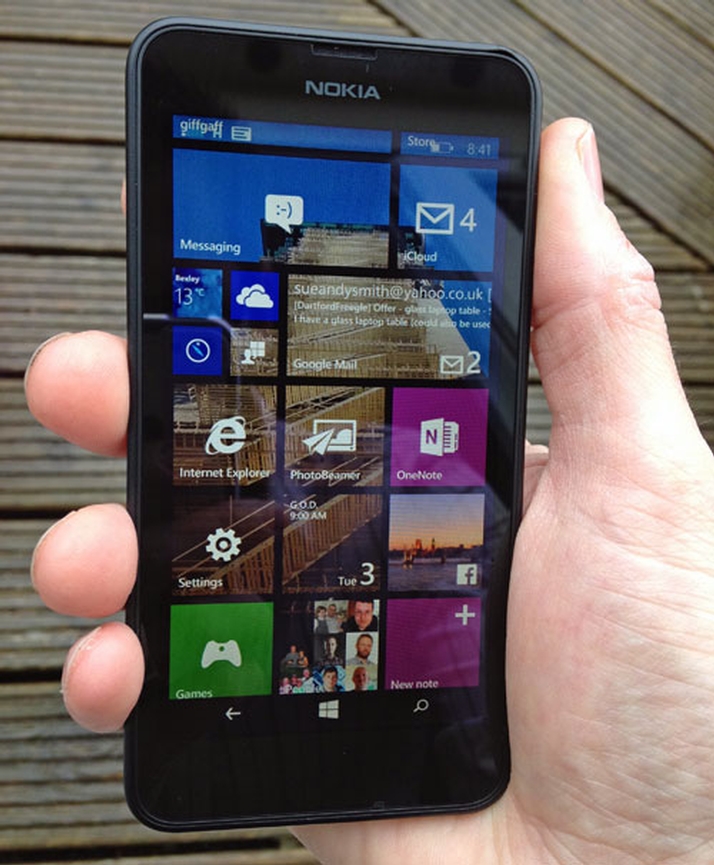 As a low-end phone, things are quite basic with an LED-less rear camera, a rear-facing mono speaker and a microUSB charging port at the bottom. Unlike other Lumia’s the 630 has no dedicated shutter button: you get a power button with a volume rocker above it.

We’ve included both these devices in one review because they are very similar smartphones. A minor difference is that the Lumia 630 comes with a matt finish plastic shell while the Lumia 635 has a glossy coating. Since you can buy different interchangeable shells, there’s nothing stopping you mixing and matching.

The more important variation is that the Lumia 630 is limited to 3G data while the Lumia 635 adds support for 4G LTE networks. For some markets, the Lumia 630 will be available in a dual-SIM model.

Aside from the mobile data difference, the two Lumia smartphones share the same specifications. Perhaps the biggest compromise – and disappointment – is the low-resolution 4.5in screen. With 854×480 pixels, that’s under 220ppi and you really notice this when reading text on web pages. It’s fuzzy and hard to read, which means you have to zoom in more than on a smartphone with a higher resolution display.

Despite being an IPS screen, viewing angles aren’t the best. A bigger issue is that our sample had clearly visible backlight bleed along the top edge which was all too noticeable on light-coloured backgrounds. Overall, the backlight was more uneven than we’d like.

Processing power is decent for the most part. The 630 has the same 1.2GHz quad-core CPU as the Moto G but has half the RAM, with just 512MB on board. In general, Windows Phone 8.1 is snappy and responsive. One notable exception is the camera app. It’s never quick to launch, and can sometimes take several seconds to load, being ready to take a photo only after six or seven seconds – that’s unacceptable and meant we often missed the moment.

Since our usual benchmark apps aren’t available on Windows Phone, we could run only the browser-based SunSpider test. Here, the 630 completed the test in an average of 1486ms, a shade quicker than the Moto G.

There’s only 8GB of internal storage but as with flagships such as the Galaxy S5 and HTC One M8, the Lumia 630 and Lumia 635 have a microSD card slot which is capable of taking up to 128GB. You also get 7GB of free Microsoft OneDrive cloud storage.

Another disappointment with the smartphone is mediocre battery life. During our testing, we were lucky to get through a full 24 hours without getting nagged about “critically low” battery levels. That was with average use – some emailing, IM, Facebook, YouTube and gaming. With heavy use, you’ll need to be near a power socket (or have a second battery to hand) in order to make it through a working day.

Annoyingly, the 630 (like all Nokia phones) is fussy about chargers. You get one in the box – with a captive microUSB cable – but try and use a different charger and it will warn you the phone is charging slowly.

A 5Mp camera sits at the back of the device, capable of capturing 720p videos. It’s nothing special, with no stabilisation, no LED flash and no HDR mode. The default camera app over-sharpens the photos to make them appear more detailed.

Here’s our standard shot of St Pancras, albeit on a rather miserable day (click to enlarge the photo – we’ve resized it to 1200 pixels wide).

Below is a 100 percent crop of the original photo so you can see the level of detail captured:

Here are a couple of other shots we took. They are unedited apart from being resized from 2592 pixels wide down to 1200 to fit your screen (click to enlarge):

There’s no front-facing camera, which makes selfies almost impossible. It’s reason enough to avoid the 630 altogether if you want to use Skype for video chats. 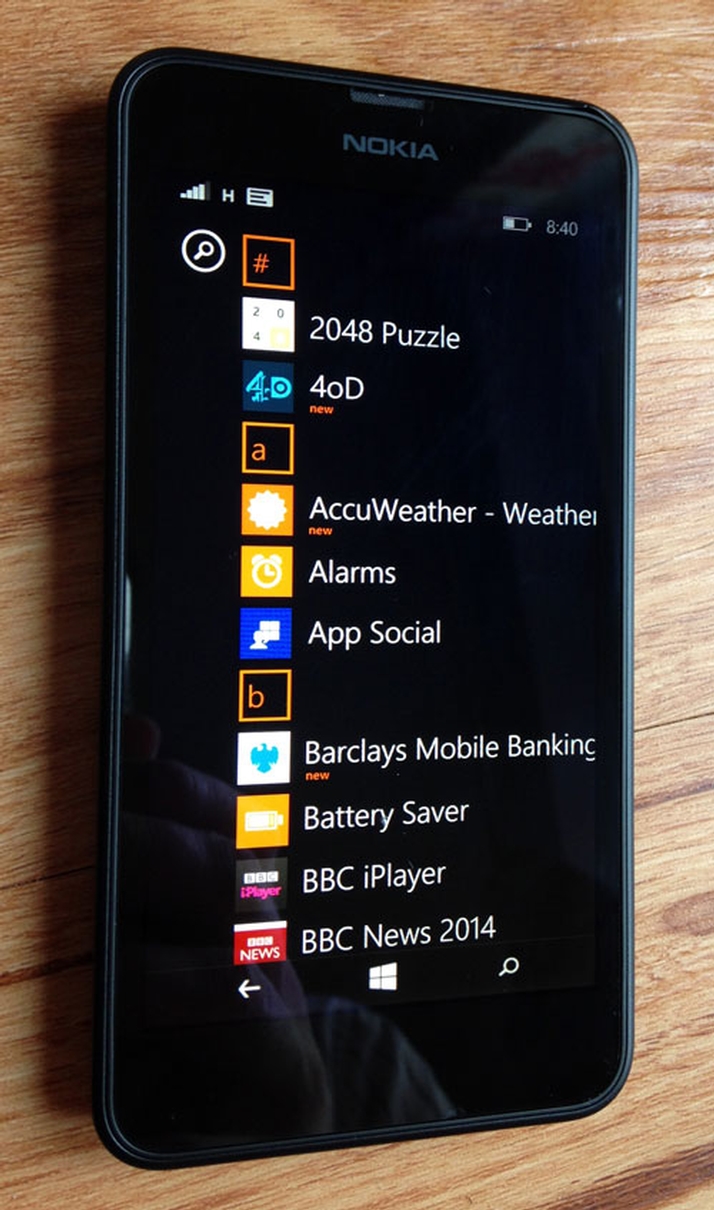 The Lumia 630 and Lumia 635 come with Windows Phone 8.1 which is the latest version of Microsoft’s mobile operating system. Although an update will be rolled out to existing Lumia devices, it won’t arrive for a few months. It also includes Nokia’s Lumia Cyan updates, in addition to Microsoft’s tweaks.

For starters, you can have up to six columns of tiles on the Start Screen and you can also choose an image as a background to them instead of picking a block colour. There’s a nice parallax effect which looks great and makes the phone feel more personal.

A headline new feature is the Action Center (below) which finally brings notifications to Windows Phone. Like iOS and Android, it’s accessed by swiping downwards from the top of the screen. You can choose which apps you want notifications to appear from and there are also four tiles for quick settings, which you can customise.

There are other tweaks too such as more lock screen themes, a new calendar which integrates weather, the Word Flow keyboard offers personalised predictive text and Swype-style gesture typing. A set of Sense (nothing to do with HTC) features help you manage data usage, storage and Wi-Fi.

Cortana is Microsoft’s answer to Siri and the firm says it’s the first ‘true personal assistant on a phone’. Unfortunately, unless you change the region and language on your 630 to US English, Cortana won’t appear. Plus, since the digital assistant is integral to some of Windows Phone 8.1’s new features such as reminders and Quiet Hours, you won’t see those either. Cortana is promised as an update later in 2014, but never buy anything on the basis of promises – it may be delayed until 2015.

All of this is a big step in the right direction for Windows Phone 8 and its mission to catch up with iOS and Android. We like a lot of the new features but there still remains the issue of a lack of apps in the Store. You’ll find the likes of BBC iPlayer, 4oD, ITV Player, Whatsapp, Facebook and Netflix, but other apps are still conspicuous by their absence, notably Google apps. For the most part, you can install third-party apps to get Google Maps, YouTube and Gmail, but it’s a shame there are no official apps.

There’s also a problem if you have Bluetooth devices such as fitness trackers. While there are some third-party apps for popular trackers including Fitbit, they don’t offer synching. For less popular devices, you’ll likely find nothing at all. For example, I just had the Tado thermostat installed. Apps are available for Android and iOS, but not Windows Phone 8.

If you’re considering the Lumia 630 as a first smartphone and you don’t plan to buy lots of wireless accessories, these limitations might not be an issue. However, if you’re switching from Android or an iPhone, you may well be frustrated.