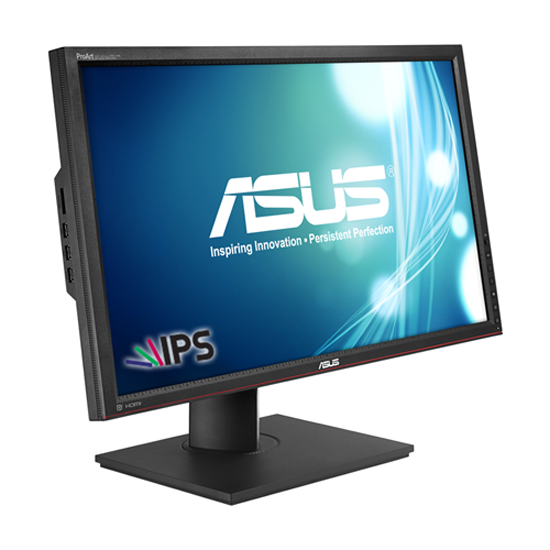 Although 24-inch 1080p IPS displays are now available under £200, good-quality 27-inch consumer panels are still a fair bit more expensive. Therefore there’s not too much of a price difference between those screens and the Asus PA279Q. For the extra outlay you get a display with excellent colour accuracy, a wide range of inputs and a well-designed and highly usable menu system. Brightness, delta-E figures and contrast ratio were well within acceptable limits. Given this monitor’s quality, anyone that needs great image quality should give it serious consideration.

Asus now has its sights firmly set on the high-end  display market. Not content with being one of the first companies to offer a 4K monitor, the 31.5-inch PQ321Q, Asus has new professional displays promising colour accuracy at a range of other screen sizes. The Asus ProArt PA279Q is its latest 27in screen.??The PA279Q uses a matt anti-glare 10-bit IPS panel with a wide-colour gamut, quoted as factory calibrated for a delta E figure of less than 2. As with other high-end displays, such as the NEC P242W it uses a recent LG advanced high-performance IPS (AH-IPS) panel, with a native WQHD 16:9 resolution of 2560 x 1440 pixels. See Group test: what’s the best display?

This translates to a dot pitch of 0.233 mm, and a pixels-per-inch density of 108 ppi. The listed response time of 6 ms suggests it should be fine for gamers as well as graphics professionals.

The can screen swivel 90 degrees, to be used vertically if desired; the PA279Q actually arrives boxed in that orientation. It can also tilt forward, up to 20 degrees.

A potentially useful addition for professional graphic designers is a centimetre ruler on the X and Y axis of the bezel. There’s also a monitor hood in the box. The hood sticks to the bezel with some tape, and has a small opening on the right-hand side for easier access to the display controls.??Avoiding a touch-sensitive display control system as used by companies such as Dell on its high-end screens, Asus has instead provided six physical buttons on the right and a small joystick to navigate through menus.

Pushing the joystick inwards brings up the QuickFit alignment grid, providing a useful overlay for lining up graphics, entireley independent of whatever software you’re running. With repeated presses, you can switch between guides, including centimetres, inches, screen regions and A4.

There’s also a resizable picture-in-picture (PIP) mode to display two different inputs on screen at once, with the second input in a corner of the screen. You can also opt for picture-by-picture, with the two inputs next to each other.

The top button brings up the on-screen display, with the two directly underneath it used for quick access to the brightness and contrast controls. In the menus, these can be assigned alternative functions if you would prefer.

The button underneath that is used to switch between preset colour modes, namely Standard, sRGB, Adobe RGB, Scenery, Theatre, and two customisable user presets. The remaining two buttons are to switch between inputs and the power button.

All the connectors are digital. At the back, there’s one HDMI, one DVI and two DisplayPort connectors, although only one of the latter is an input, the other used as a pass-through. Multi-stream transport (MST) for high-resolution DisplayPort connections can be switched on in the PA279Q’s menu.

There’s a USB 3.0 upstream port to connect to your computer, which enables six USB 3.0 ports on the display itself, one of which is specified as a battery charging port. And topping off the list is a ‘9-in1′ card reader, which supports both SD and Sony MemoryStick cards.

There’s a set of built-in stereo speakers, which handle audio carried over HDMI and DisplayPort. They’re poor quality with tinny sound, and crackle whenever loud bass passes through. But this small addition saves some time and clutter, if all you need are basic diagnostic sounds. A pair of input and output 3.5 mm audio jacks can be used for analogue audio and connecting headphones.

Using the Standard preset, with the PA279Q uncalibrated out of the box, and brightness and contrast settings at their defaults, the PA279Q looked slightly saturated, especially at the red end of the spectrum. For accurate colour representation, the sRGB and Adobe RGB presets were a much better choice. ??There are plenty of menu options to adjust the image, but many are disabled in different display modes. With the sRGB or AdobeRGB presets, for example, the only control you can adjust is the brightness, with settings such as white point, contrast and gamma already preset so greyed out.

You get full access to the six colour sliders for hue and saturation, to alter red, green, blue, cyan, magenta and yellow levels, but only when changing a user preset. If you spend time fiddling with the controls, you can very subtly adjust the image quality to your preference.

In testing, we left these controls alone, since we used a calibration tool, which only required us to adjust the brightness. We left the display on its Standard Preset, calibrated, then ran all the Datacolor advanced tests.

Contrast ratio was lower though at 640:1, which is a good figure significantly better than a typical consumer display, if not as high as more expensive monitors, but.

Luminance in the middle and lower sections was also good, with a maximum difference below 5%. At the top it varied slightly more though, with a difference in brightness of 21.4% in the central section, which is more reminiscent of a consumer display.

As a 27-inch screen with a 2560 x 1440-pixel resolution, we’d expect the display to consume a little more power than smaller, lower-res models.

At 100 percent brightness we measured 57 W, which is roughly double the power consumption of a 24-inch 1080p consumer display. Set to 120 cd/m^ 2, the power consumption dropped to 31.5 W. More troubling, in standby mode it still drew 26.2 W, more than smaller panels consume when turned on.?

We ran into an issue with testing under OS X. While the display worked perfectly with a Windows 8.1 PC and a 2011 MacBook Pro, on a 2011 iMac the PA279Q displayed unreadable text. A quick look on a forum showed other Mac users had experienced the same issue with the PA279Q, and other displays too. A user-made script fixed the problem, forcing RGB over the iMac’s Thunderbolt connector.