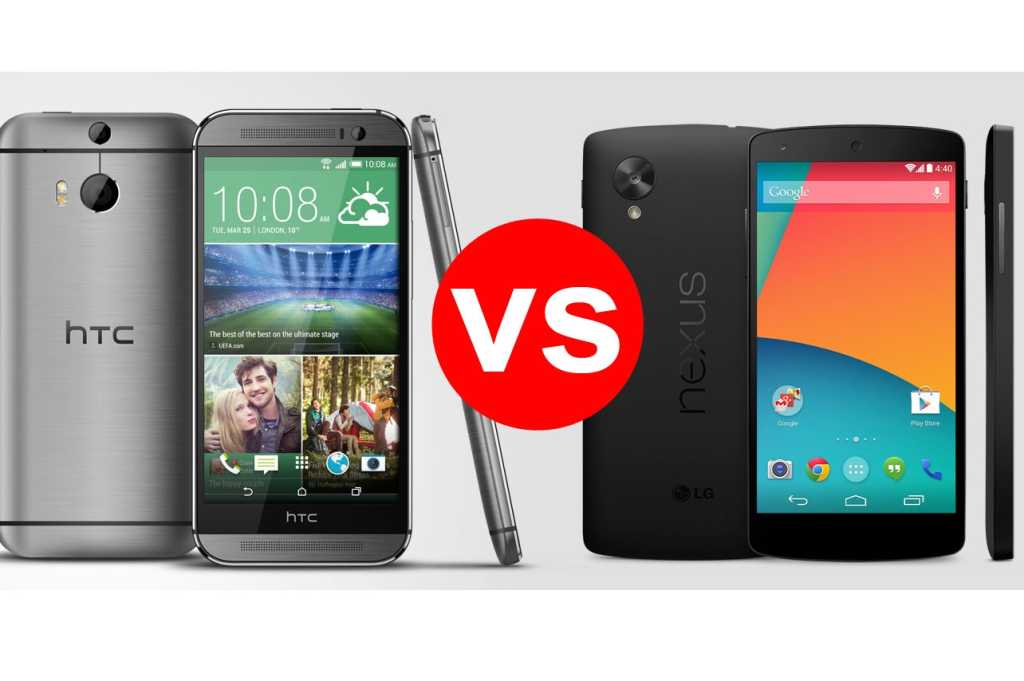 If value is more important than anything else, the Nexus 5 wins hands-down. If it isn’t, you won’t be disappointed with the HTC One M8, apart from perhaps the hit and miss Duo Camera.

You’re spoiled for choice when it comes to quality Android smartphones. Here we compare the new HTC One M8 with the G oogle Nexus 5 and tell you which one to buy.

The new HTC One M8 is, like its predecessor last year, a great smartphone. Yes, it has its weaknesses, but as flagship Android phones go, there’s a lot to like. Since it’s already on sale, and since we’ve run our fine-toothed comb over it, we thought it was about time we found out which is best in our HTC One M8 vs Google Nexus 5 comparison review.

HTC One M8 vs Google Nexus 5: Design and build

It’s an easy win for the HTC One M8 on this score. It’s a premium smartphone with a one-piece aluminium body that looks and feels great. Build quality is excellent and only badge snobs might have a problem with the big HTC logo on the back.

Of course, we’re not saying the Nexus 5 isn’t a well-built or good-looking phone. On the contrary, it’s a nice piece of kit: it’s simply built to a lower cost. That means you get a plastic body instead of metal, and less of a premium feel.

It does mean the Nexus 5 is lighter: 134g vs 160g, but both handsets are roughly the same size overall, and almost the same thickness at around 9mm.

There’s not much to choose between two when it comes to their screens. They both have Full HD resolutions and are roughly the same size, with 5in for the HTC and 4.95in for the Nexus.

Both screens use IPS panels, which means great viewing angles and contrast. Whether you’re checking email or watching a video, both phones have impressive displays. Colours are vibrant and both are bright.

HTC One M8 vs Google Nexus 5: Hardware and performance

Even though the Nexus 5 is an older smartphone, both are decent performers. The Nexus 5 has a quad-core Snapdragon 800 processor with 2GB of RAM. The newer HTC One M8 has the Snapdragon 801 (the same as the Samsung Galaxy S5).

It’s a bit faster in every way, including the speed of the integrated Adreno 330 GPU which is responsible for graphics. The One M8 also has a co-processor, though, which does set it apart from the Nexus 5.

For one thing, it means HTC can do things with its cameras that the Nexus 5 can’t. The One M8’s twin rear cameras allow you to refocus photos after taking them. It also means you can do more when the One M8 is in sleep mode, such as displaying the time and notifications by double-tapping the screen (this works well with the new DotView case), and swiping on the blank screen to launch apps.

The One M8 can also monitor movements using the co-processor, much as the iPhone 5S does, allowing you to use it as a Fitbit activity tracker without burning through the available battery power. HTC pre-loads the Fitbit app as well.

If you want to see benchmark results, visit our individual HTC One M8 and Nexus 5 reviews, but suffice to say that you won’t be disappointed with the performance of either smartphone.

HTC One M8 vs Google Nexus 5: Storage and connectivity

One of the bugbears with the original HTC One was the lack of a microSD card slot. It’s the same with the Nexus 5 – you’re limited to the 16- or 32GB of internal storage. The One M8 may have only 16GB of on-board storage, but you can supplement this with up to 128GB via a microSD card.

Both smartphones have Bluetooth 4.0, dual-band 802.11ac Wi-Fi, GPS and NFC, but the Nexus 5 one-ups the One M8 with wireless charging. We’d have much preferred a microSD slot, though. The HTC One M8 has the same infrared transmitter as its predecessor, so you can use it to control your TV and other home entertainment boxes.

Do note that the HTC supports Apt-X for Bluetooth audio streaming, while the Nexus 5 does not. This means that if you have a compatible Bluetooth speaker (or receiver) you will get better-sounding wireless audio from the HTC.

Both phones run Android 4.4 KitKat, but the Nexus 5 will always have the advantage, being a Google device, of being the first to get operating system updates. With the HTC One M8, you may have to wait until your mobile provider rolls out any update, or until HTC releases it directly.

Whether you consider this an advantage or not, the Nexus 5 comes with plain Android. That means there’s no changes or additions to the Android interface, as you get with the HTC One M8. That comes with Sense 6.0.

One of the most useful additions this brings is motion launch gestures, mentioned above. Swiping left on a blank screen launches the widget panel, and a right-hand swipe takes you to BlinkFeed (HTC’s news app). An upwards swipe unlocks the phone. You can also customise the M8 with themes.

The camera app on the Nexus 5 is the standard Android fare, while you get an altogether more feature-filled app on the One M8. As well as the ability to refocus photos taken on the rear Ultrapixel camera, you can also change setttings such as ISO, white balance, exposure compensation and more.

We weren’t overly impressed with either of the Nexus 5’s cameras, but it provides usable shots in good light. Smartphones such as the iPhone 5S and Samsung Galaxy S4 and S5 deliver noticeably better photos.

Some were disappointed when HTC revealed that the Ultrapixel camera on the One M8 was taken straight from the old HTC One. And anyone who wants high-quality, noise-free, detail-filled photos from their smartphone will probably want to avoid the HTC One M8. Some of our test shots (so far) have been a bit underwhelming. In reasonable light outdoors, photos from the rear camera have been nice and sharp but, when examined closely, lack detail and are noisier than we’d like – even at the lowest ISO 100 setting. Brickwork, for example, has a smudgy appearance, while darker areas are riddled with coloured smeary-looking noise.

The good news is that the camera is fast (thanks to the co-processor) to focus and shoot, meaning you’re more likely to capture the moment than not.

If you’ll only be taking snaps and video clips to post on Twitter and Facebook, both smartphones do an adequate job, but neither would be our first choice if photography were the top priority.

Obviously, the HTC One M8’s clever refocusing ability gives it the edge as you can create SLR-like portrait photos where the person’s face is in focus, but the background is blurred. (This faux-bokeh effect works only on certain types of photo, though, and sometimes looks like a badly applied Photoshop filter.)

The One M8’s 5Mp front-facing camera is better quality than the Nexus 5’s 1.3Mp webcam, though.

Video-wise, both smartphones shoot 1080p video. The One M8 has a slow-motion mode, capturing Full HD footage at 60fps, meaning you can play back at half-speed. It’s not the 120fps that iPhone 5S owners enjoy, although this is recorded at 720p rather than 1080p. Editing options aren’t as slick as on the iPhone, but it’s still a nice feature to have.

The Nexus 5 has an 8Mp sensor for its rear camera and benefits from optical image stabilisation. This means that footage is much smoother than the HTC’s which – oddly – has no stabilisation at all.

OIS also means the Nexus 5 should give you sharper photos in dim light than the One M8. But, on the other hand, the twin-tone flash on the One M8 helps to give more natural-looking photos at night when you’re forced to use the flash.

As we noted when we originally reviewed the Nexus 5, it has the specifications to rival flagship Android phones, but at a much lower price. For a shade under £300, you get a great smartphone with only a few compromises. One is the plastic body, another is the lack of expandable storage.

The HTC One M8 may have an aluminium shell (and a choice of three colours) and feel much more like a premium phone, but you’ll also pay for the privilege: £550 if you buy it outright with no contract.

It does have expandable storage and some nifty features such as the Duo Camera and motion launch gestures. If you watch a lot of videos or play games and use the built-in speakers rather than headphones, the HTC’s BoomSound speakers come into their own.

However, if value is more important than anything else, the Nexus 5 wins hands-down. If it isn’t, you won’t be disappointed with the HTC One M8, apart from perhaps the hit and miss Duo Camera.