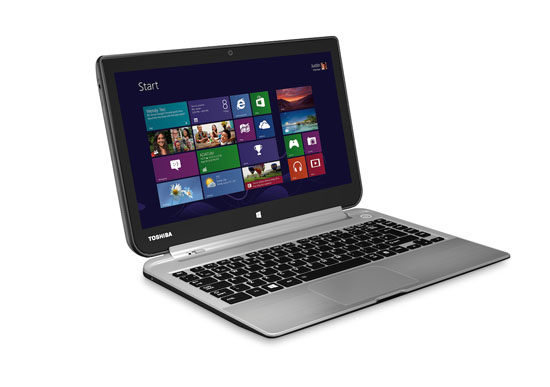 The W30T does have its strong points, including an attractive screen and good battery life. However, its size and weight in both tablet and laptop modes is a clear weakness, and the W30T will struggle to compete against the many slimmer, lighter laptops and tablets that are now available.

Toshiba’s W30T is an odd device. It’s a smartly designed and affordable convertible that can function as either a laptop or tablet. Unfortunately, its size and weight prove to be a hindrance in both modes. See what’s the best laptop you can buy in 2014?

The W30T does make a good first impression, with aluminium keyboard and 13.3-inch screen panels that look smart and feel very sturdy. It has the same detachable design as HP’s more expensive Spectre X2, which allows you to separate the screen from the keyboard so that you can use the screen as a self-contained tablet. It also borrows HP’s smart idea of including separate batteries in both the keyboard and screen sections in order to provide longer battery life.

However, we got a shock when we picked it up. Toshiba states that the combined weight of the keyboard and screen in laptop mode is 2.1kg, but we weighed it at 2.3kg – 1.2kg for the keyboard and 1.1kg for the tablet. It also measures a full 24.6mm thick, which is the sort of size and weight you’d normally expect from a bulky 15-inch laptop. We had trouble trying to lift it with one hand, and certainly wouldn’t be very keen on carrying it around all day long.

That’s a shame, as the W30T does have some attractive features when used as a laptop. The 1366×768 resolution is a little disappointing, but the IPS panel is bright enough to provide very good all-round viewing angles and will work well for web browsing and streaming video. The speakers in the keyboard section also produce a surprisingly loud and full sound, so you can listen to some music or even give an impromptu business presentation without needing headphones or external speakers.

Connectivity isn’t a great strength, though. There’s just a single USB 3.0 port on the keyboard section, while the screen/tablet includes micro-USB 2.0, micro-HDMI and micro-SD, which means that you’ll probably need to buy suitable adaptors or cables for those.

Performance is also relatively modest when compared to more conventional laptops in this price range. The W30T is listed at £699 on Toshiba’s web site – although we’ve seen it for almost £100 cheaper from other online retailers – and includes a Haswell i3-4020Y running at just 1.5GHz, along with 4GB of memory and 500GB hard disk. That entry-level processor doesn’t include a Turboboost option to enhance performance, and along with the ageing 5400rpm hard drive produced a score of just 2300 points when running the PCMark 7 benchtest. To be fair, that’s still perfectly adequate for web browsing, streaming video and running Microsoft Office, and its integrated HD 4200 graphics even managed a playable 28fps when running our Stalker test at 1280×720 resolution. It won’t be able to handle the latest 3D action games, but tablet games like Angry Birds will run well and will benefit from the large screen.

However, the size of the screen is something of a mixed blessing in tablet mode. The image quality is good, but when you remove the screen from the keyboard you find that the 13.3-inch tablet weighs 1.1kg and measures 14mm thick. It’s too big and heavy to hold comfortably while you browse the web or watch some streaming video, and we often found ourselves slotting it back into the keyboard just to support the screen while we ran the BBC iPlayer.

Thankfully, the twin batteries do at least work well. Toshiba quotes battery life of three hours and 15 minutes for the tablet, with another two and a half hours when joined with the keyboard again. In fact, the tablet alone lasted for three hours and forty-five minutes when streaming the iPlayer, and gained another three hours in laptop mode. Lighter use should allow you to last closer to eight hours altogether, which is quite respectable when compared to similarly priced laptops.