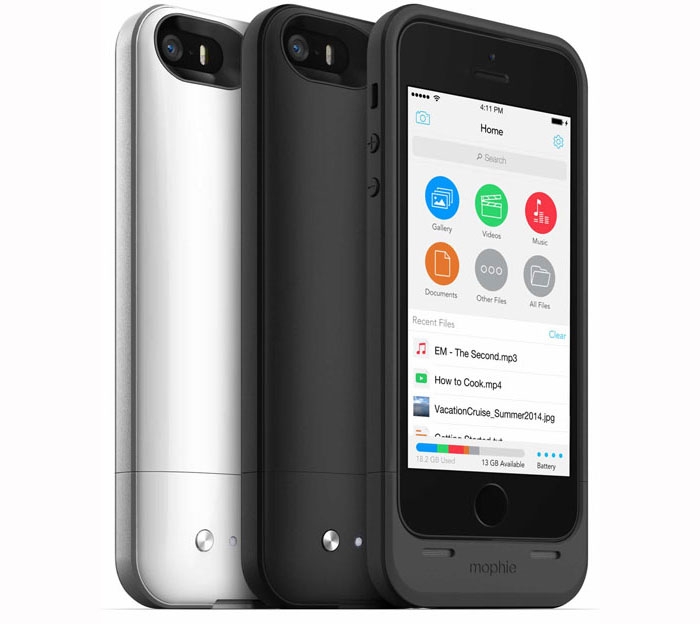 £130 for an iPhone case seems expensive but consider what you’re getting with the Mophie Space Pack: it’s a proper full-charge battery case (usual cost £89), with the added benefit of an extra 16GB or 32GB of storage space. Buy direct from Mophie and you can get the price lower while the UK pound (£) is strong against the US dollar ($) – we could get the 16GB model for £95. Yes, it does bulk your phone up but what’s more useless: a slightly larger, heavier phone or a full and powerless one? It’s really the only way you can simply add to your iPhone’s storage capacity, even if it’s not as fluid a process as you’re used to with Apple. But if you want to carry a ton of stuff with you and you’re willing to access it via the free Space app then this case is a winner. You get the best of both worlds – extra battery life and extra storage for your photos, videos, music, apps and files – all in an attractive and protective case.

Battery life is a long-running – or should that be short-running – bugbear for iPhone users. After a few months of heavy use another concern raises its head: lack of storage space. The new Mophie Space Pack uniquely solves both problems, being a battery case that packs extra storage too.

Announced at CES, the Mophie Space Pack looks like the dream package for iPhone 5 and 5s users. Heavy iPhone users download a lot of apps, take a ton of photos, want access to videos on the move, and use their phone as an iPod for their music. Just imagine loading your phone with movies and music for long-haul travel, or not having to clear photos and videos taken while on holiday. App addicts and Apple Newsstand magazine readers are going to love the Space Pack, which offers up to 32GB of extra storage plus a near full charge of the battery – all in a rather attractive, protective case.

Anyone who uses their iPhone camera a lot for photos and videos or downloads lots of apps will know the dreaded low-storage warning, sending you off to Settings to try to dump a load of stuff to free up space. You rue the day you didn’t buy the top-end 64GB iPhone, although you know it was too expensive to consider at the time.

Think about how little storage your iPhone has. 16GB? That’s puny. 32GB? Half as puny. 64GB? Even breaking the bank didn’t buy you much. The 2009-vintage iPod classic boasts 160GB. Now that’s proper storage.

I have a lot of apps – really a lot – some of which are quite bulky, and I store a fair few photos on my iPhone 5s, although I am lucky enough to own the top-end 64GB model so haven’t hit the low-storage alert since my poky old 16GB iPhone 5. I suspect the need for extra iPhone storage space will most affect owners of the 16GB iPhone 5 or 5s, and heavy video users.

The Mophie Space Pack – available in 16GB and 32GB models – gives you a stack of new storage options.

It will take an entry-level 16GB iPhone 5 or 5s to either 32GB or 48GB, right up to a whopping maximum 96GB of iPhone storage when slipping a 64GB iPhone 5s into the 32GB Mophie Space Pack.

It’s not as great as it could be because Apple doesn’t let you do much natively with that extra storage. Don’t blame Mophie. It’s Apple that makes you jump through hoops to access the extra stoarge. Many Android devices feature SD Card slots so you can bump up your non-Apple smartphone quickly and cheaply. That’s an alien concept to Apple. So it’s time to go to Space.

The Space Pack works with the help of the free Space app (requires iOS 7), which you use to organize the files stored in the case. After you transfer files into the Space Pack, the app scans and assigns the new files into collections: eg. Photos, Video, Music.

You can transfer items from your iPhone directly – for example, from the phone’s Camera Roll, email attachments or items from other apps on your iPhone.

You can also import files into the Space Pack from a computer in the same way you import them into a USB flash drive. Note that files can’t be bigger than 4GB in size.

Easier is to use the Space app’s own camera function, which lets you take photos and videos with the iPhone camera that will be saved directly into the Space Pack’s storage, without ever taking up space in your iPhone. These photos are automatically saved directly into the Space Pack’s “DCIM” folder, and won’t bother the iPhone’s own Camera Roll or take up any of the phone’s valuable storage space.

Using the Space Pack’s own camera tool is fine, but if you use photo-editing apps or a different camera app entirely – such as the excellent Camera+ – then you have to export the photo back to the iPhone. That’s a bit of a hassle so the best option might be to use the Space Pack’s storage for archive photos and videos, and the iPhone’s own Camera Roll or an app such as Camera+ for day-to-day photography.

The Space app has perfectly acceptable built-in video and music players, plus a photo viewer. You can even tap the AirPlay button on the Space App’s music player to stream your stored music direct from the Space Pack to any paired Bluetooth device.

Note that the Space Pack cannot open movies purchased through iTunes, because of Digital Rights Management in those files. You must instead use iTunes to transfer the movie into your iPhone and watch it using the iPhone’s viewer. Again this is annoying but it’s the way Apple lets third-party accessories and, more importantly, you use its devices.

The app’s Home screen’s Storage bar indicates how much of the Space Pack’s storage is being used, and there’s even a nice pie chart to show you what’s taking up the Space’s Pack’s storage.

Apps, unfortunately, have to be stored on the iPhone’s own storage so you can’t hide any away on the Space Pack. Again, you need to think of the Space Pack more for archive and media storage, saving space on the phone for apps and new photos.

Aside from the handy extra storage the Mophie Space Pack operates like any of the other super-handy Juice Pack battery-packed cases.

Mophie claims that it will give a fading iPhone battery another full 100 percent charge. We haven’t had time for extensive battery re-charge testing but we expect the Space Pack battery life to be about the same as the excellent Juice Pack Air, as it has the same 1,700mAh battery capacity. It might be a little more powerful than the Air as it is rated at 6.46Wh, compared to the Air’s 6.29Wh.

We did achieve near 100% charges with the Air, so Mophie’s claim is probably about right.

The Space Pack has four LED lights that will show you remaining charge in the case’s battery. You only charge the iPhone from the case when you want to, using the green/red switch to the right of the LEDs.

It’s worth noting, though, that like most apps the Space app will be drawing power while open, even when you are using a different app. So it’s best to use the app’s Sleep mode that automatically shuts off the Space Pack’s electronics after the app has been inactive for a set amount of time.

As the storage part of the case runs off the power of the case’s battery and not the iPhones there is a risk that when the Pack’s battery is drained you would lose access to your files.

The Space Pack is, like most battery cases, charged up using the supplied micro USB cable.

Like all the Mophie Juice Packs the Space Pack looks gorgeous. It’s available in Matt Black and Glossy White.

Again like other battery cases the Space Pack does bulk up Apple’s slimline iPhone 5/5s. That’s unavoidable. I’ve used battery cases for a couple of years now and have to say that you get used to the extra heft very quickly. It’s also difficult to remember what it’s like to be without a full charge of battery juice when you need it most.

There are all the usual essential button and camera cutouts, and the On/Off, Ring/Silent and volume buttons work perfectly.

Mophie includes a pass-through headphone adapter that you’ll need if you use headphones with an angled jack.

The Mophie Space Pack is available in 16GB and 32GB models, costing £129.95 and £139.95 respectively. Clearly the extra tenner for the 32GB model is well worth digging deeper for.

When considering just the battery part of the Space Pack the most similar battery pack is the Juice Pack Air, which costs £89.95. This means that the storage part of the Space Pack will be costing you an extra £40 (16GB) or £50 (32GB). If your iPhone often runs out of storage space £40 is a pretty good deal for extending the capacity, although you’d be silly not to buy the £10-dearer 32GB case.

Get your Mophie for less

The entry-level Mophie Juice Pack Helium for iPhone 5 costs £69.95 RRP – although if you buy direct from Mophie you can get it cheaper if the £/$ rate is in your favour. In mid July 2014 we found the Helium could be got for just over £50 including shipping from the US. The slightly chunkier mid-range Mophie Air will set you back closer to £90 RRP (or just £65 from Mophie in July 2014) but does offer a bigger battery boost. The top-of-the-range Plus costs £109.95 (or £76 direct), but we actually prefer the Air, which offers only slightly less battery power.

If you rarely use up all your iPhone’s storage then you’re better off with a battery-only case that will save you £40.