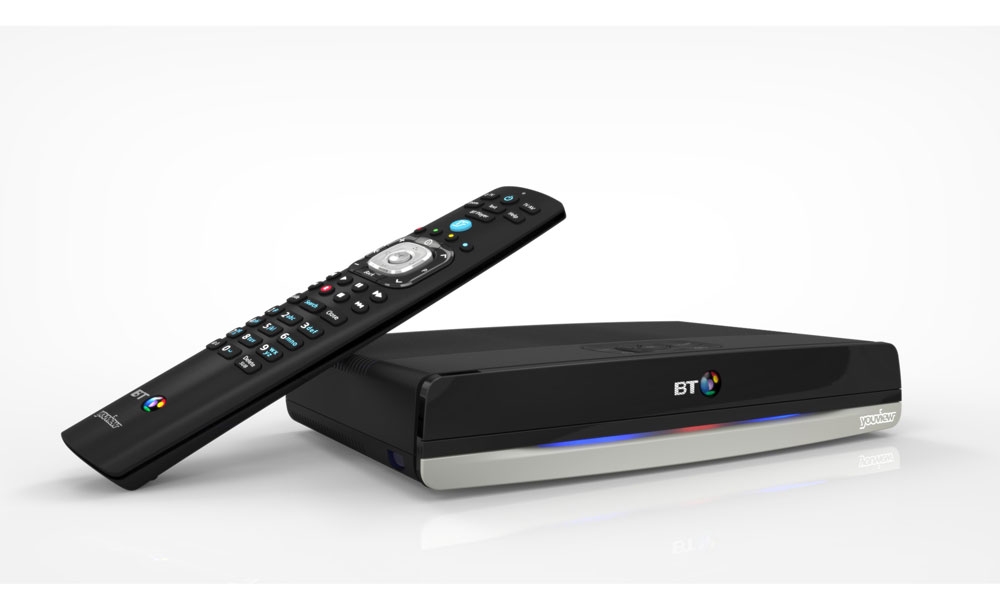 BT’s YouView+ box is a vast improvement over its predecessor, being much faster and quieter. It also uses less power and starts up quicker. It doesn’t support 4K, but there’s a separate Ultra HD version if you do want that.

BT’s YouView+ box is made by Humax, well-known for its Freeview and Freesat set-top boxes. It has the easy-to-use YouView interface, but in a much smaller, faster, quieter package than its predecessor.

And, unlike previous boxes, this one will work with any broadband provider, and isn’t only for BT customers.

Although not present at launch, the box now includes Netflix, Now TV and Amazon Video apps for streaming video from these services.

If you sign up for a new broadband + TV contract you’ll get a YouView+ box and Home Hub router included in the cost which starts at £29.99 per month. Existing customers can get the box by adding TV to their broadband package.

Check BT’s website for details and the latest offers.

There’s a newer version of the box which supports Ultra HD (4K) channels. You can read our separate review of the Ultra HD YouView box.

If you’re upgrading from an old BT YouView box, bear in mind that there’s no way to transfer recordings to the new one.  The YouView app supports only one box at a time, so you’ll need to head to your iPhone or Android settings and delete the unique number for your old box before firing up the app again and running through the set-up process again.

Lights glow from beneath the silver panel just as with the Home Hub, telling you whether the box is in standby, recording and whether it has a broadband connection.

A small array of buttons on top means you can still control the basic functions if you lose the remote, and the remote itself is also new. We prefer the simpler design of the old remote, which had slightly bigger (but noisy) buttons.

The new one has quieter rubber buttons, but a redesigned navigation pad which integrates volume and channel buttons. It’s easy to press the mute button instead of navigating left, or bring up programme information instead of pressing up.

In the box you get a mains adapter (the power supply is external), an HDMI cable and an extremely long Ethernet cable. Annoyingly there’s no built-in Wi-Fi so you’ll have to use the Ethernet cable to connect the box to your router.

The rear USB port can’t be used with a Wi-Fi dongle, before you ask. It’s for engineers’ use only – or to charge your smartphone.

Most people will be able to use HDMI to hook the box up to their TV, but if your TV is older there’s still a scart output along with composite video. Audio outputs comprise stereo RCA and an optical S/PDIF for connecting to a suitable home cinema amp.

There’s an RF aerial input and output, and the box will allow the signal to pass through to your TV (or another set-top box) even when in its low-power Eco setting.

In that mode, the box takes a tardy 1 minute and 36 seconds to boot up but sips power at under 1W. If you want a much faster boot time (just a few seconds), you’ll need to switch to the ‘high’ power mode which uses somewhere between 8W and 9W.

That’s only a watt or so less than the usual power consumption when the box is on, but overall, it’s roughly half the draw of the older YouView box.

You don’t get a choice of power modes if you want to use the YouView app on your smartphone. This needs the box to be in high-power mode to work and – like Sky+ – allows you to remotely schedule recordings.

It’s a one-way deal with no response from your box, so a recording will happen only if they’re received before the programme starts, your box has enough free space (there’s a 500GB hard drive) and it doesn’t clash with other existing recordings.

At least you can choose to record an entire series rather than a single show.

As there are two Freeview HD tuners inside the box, you can record two separate channels at the same time. Depending on which these are, you may or may not be able to watch a third, different channel while recording two others. You can always watch recorded shows during recording, though.

There are no fans, so it’s virtually silent except for the exceptionally quiet whirring of the laptop-style hard drive. Unless you’re right next to the box, this is inaudible, so it’s ideal for bedrooms as well as the living room or kitchen. Note that the Ultra HD version does have a fan, which can be a little irritating in a quiet room.

Performance-wise, the box (a Humax DTR-T2100) is leagues better than the old DTR-T1000. It’s fast to navigate through menus, launch on-demand players and browse the EPG. If you hold down a button to skip forward or backwards, the EPG gives up trying to display programme data and quickly scrolls along the time bar. You can skip between days using the rewind and fast forward buttons – a nice touch.

If you’re unfamiliar with YouView, it’s essentially Freeview Plus (pause, rewind and record live TV) with on-demand TV fully integrated into the programme guide. That means you can browse the last seven days’ worth of programming as well as the next seven days.

Here’s a comparison of Freeview Play and YouView

Early in 2017, the interface was updated to make it easier to access players and recordings.

When scrolling back in time, you can see what was on, but only shows with a playback icon can be watched.

Since only the main broadcasters offer on-demand TV, this means that only shows from BBC, ITV, Channel 4 and 5 are offered. And it’s only certain shows, not everything. Films in particular are not usually available to watch on demand and neither are top-tier US shows, typically because the licensing agreement doesn’t allow this type of broadcast.

However, since YouView launched, more ‘players’ have been added to the on-demand section including Now TV – a subscription service from Sky – and the Sky Store which offers pay-per-view movie rentals.

There’s no way to re-order the players so the ones you use most are at the front of the list, something we’re still hoping BT will address.

Finally, there’s BT TV, which lets you access BT’s on-demand content. This includes a range of TV shows and films, including the AMC channel.

You can either subscribe to this or pay per view, and there’s a handy shortcut – the green button on the remote – that filters the view so you see only content that’s included in your package.

One of YouView’s best features is global search. Press the YouView button and choose Search – results will be shown from live TV as well as on-demand players and internet channels.

If you select a show that’s available on-demand, it will launch the appropriate player and start playback. It’s only a shame that text entry is still so clunky, relying on the number keys; there’s no way to use the YouView app to enter text as you can with an Apple TV.

In addition to the on-demand content, you can watch extra TV channels which are streamed live over your broadband connection (denoted in the EPG by three blue dots below the channel name).

However, to get these, you’ll need to be a BT customer and add an extra TV pack to your package. Examples of bolt-on channels include Discovery, Gold, National Geographic, Comedy Central, Fox and others.

Available separately is BT Sport, which is available in SD or HD. (It’s also in 4K UHD if you have the Ultra HD version of the set-top box.)

In fact, most internet channels are also available in HD, but that’s a £3-per-month optional extra.

You can record internet channels just like a normal broadcast, which is a real advantage.