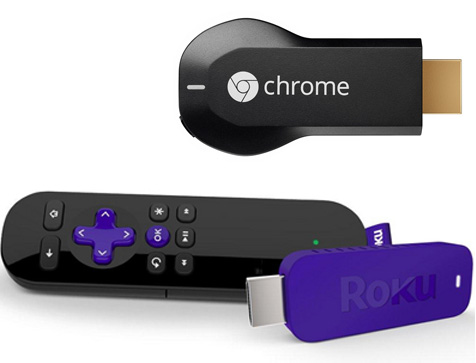 Both devices are pretty nifty in terms of turning your HDTV into a Smart TV. Right now, we’d suggest forking out an extra £20 and getting the Roku for more internet and local media streaming functionality. That said you can be sure Google is going to grow in app support for the Chromecast as time goes by, which will make its £30 price tag look incredibly appealing for the average user looking to get BBC iPlayer and Netflix on their TV without having to hook up their laptop each time.

If you don’t have a Smart TV and are unwilling to pay the vast amounts of money to upgrade to one, then you can turn your existing HDTV into a Smart TV from as little as £30-£50 with the Google Chromecast or a Roku Streaming Stick. Here’s where we find out which one is the best value in our Google Chromecast vs Roku Streaming Stick comparison review.

The way these two TV streaming sticks work are very similar, in that they are both essentially Wi-Fi dongles that plug into your TV’s HDMI port, and then bring a host of apps and online content straight to your TV. See Apple TV vs Chromecast review.

Neither device is particularly expensive, but the Google Chromecast is significantly the cheaper of the two, costing only £30 compared to the Roku Streaming Stick’s £50 price tag. See How to set up and use Chromecast.

It’s tough to declare a clear winner here as both devices are still in their infancy, and while the Chromecast offers a lot of promise, it is still lacking in terms of what it offers, when compared to the Roku Streaming Stick, thanks to the ground work done by previous Roku Devices. Our instinct tells us that spending £30 on a Google device that promises to bring Smart TV services to your regular HDTV is going to prove worthwhile in the long run, but for now the extra £20 for the Roku looks like a fair price bump. See What can you watch on Chromecast: why Chromecast is a game changer.

Price is obviously a major factor you should consider when deciding which of these two streaming stick you should buy, but what is probably more important, is what features the devices offer for the price.

On the face of it, these two TV streaming dongles do largely the same thing, and that is connect your TV to your local Wi-Fi network and enable playback from TV apps and local media.

Unfortunately as Google Chromecast has only recently been launched, there are only a limited number of services available to UK users; these include: Netflix, BBC iPlayer, YouTube, Google Play Movies, TV & Music, Red Bull TV, VEVO, Plex and Real Cloud Player. This is a list that we expect to grow rapidly once video content providers catch up with the Google Chromecast stick.

In order to get video content from your mobile devices (smartphones and tablets) working wirelessly via the Chromecast dongle, you have to purchase either the AllCast Premium or Plex for Android apps. Both these apps cost £3 and work with Chromecast, however, from our experience the playback is a bit glitchy. We’d have loved to have seen an official Google Chromecast app that played local media content from a smartphone or tablet. This would have made it a real rival to the functionality of the much more expensive Apple TV, and also a more desirable streaming dongle all-round.

The major difference between these two streaming devices is that Roku Streaming Stick comes with a physical remote control plus iOS/Android app support. It uses an on-screen interface to browse content.

Meanwhile the Chromecast relies on devices such as Android smartphones and tablets to be controlled. It also supports iPhone, iOS, PC and Mac (via Chrome) and Chome OS devices. Instead of using an interface, you simply choose what content to view via the Chromecast on your device and hit play.

There’s not a lot we can say here really. Both of these streaming dongles look pretty similar and ugly. The trouble with these devices is that the idea is for them to be hidden behind your TV, however they still need to be big enough for their Wi-Fi receivers to work properly. The result is the classic looking dongle. Pretty boring really.