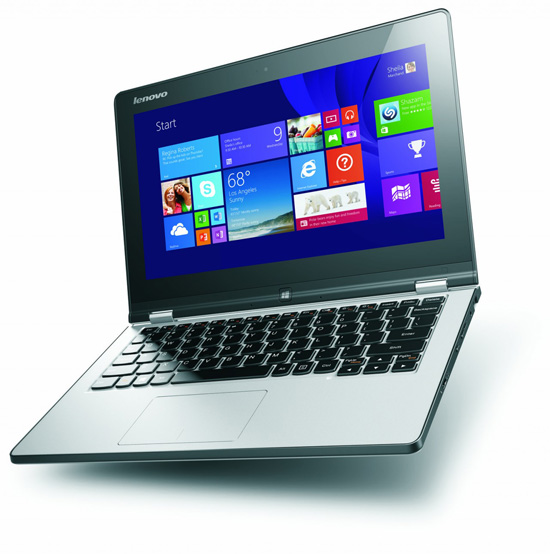 In some respects the Yoga 2 is a real bargain, as it provides good screen quality, battery life and lightweight design at a very competitive price. Performance is below-par, although it will still handle routine web browsing, streaming video and wordprocessing perfectly well. And, with its lightweight, convertible design, it’s a far more attractive device than the big, heavy 15-inch laptops that most manufacturers offer as their low-cost option.

Calling this the Yoga 2 seems like something of a misnomer, given that Lenovo has already released about a dozen different Yoga laptops of various sizes and configurations. However, this new 11.6-inch model does stand out from its flexible brethren by virtue of a £500 price tag that makes it the most affordable Yoga released so far. Here’s our Lenovo IdeaPad Yoga 2 review. See also: The best budget laptops of 2014.

Like all the Yoga laptops, the Yoga 11 is a slimline laptop with a convertible ‘flip and fold’ design that allows you to fold the screen back through a full 360-degrees. You can fold it part of the way back and then flip it over so that it stands up like an ‘A’-shaped tent, which works well if you want to run presentations or just lean back and watch some streaming video. Alternatively you can wrap the screen right around so that it folds back up against the keyboard and turns into an 11-inch tablet. It weighs 1.35kg – not the 1.56kg that Lenovo rather carelessly lists on its web site – and you can easily pick it up with one hand when it’s in laptop configuration. It only measures 17.2mm when folded flat, so it works well as a lightweight Ultrabook that you can carry around with you all day long. See all budget laptops reviews.

The weight distribution is different when you switch into tablet mode, though, and the size and weight of the screen mean that you either need to rest it on your lap or use the tent option to prop it up on its own. Even so, it’s still nice to have that flexibility, and the Yoga 2 works well as a video viewer or for showing off your photo library. The build quality is also very good for a laptop costing just £500, with firm backing for the screen panel and a sturdy, comfortable keyboard with Lenovo’s trademark moulded ‘accutype’ keys.

The screen is also a pleasant surprise. The Yoga 2 can’t match the outstanding 3200×1200 resolution of its more expensive big brother – the 13-inch Yoga 2 Pro – and is limited to a more pedestrian 1366×768. However, it does still use an IPS panel and while it’s not the brightest IPS display we’ve ever seen the viewing angles do come close to a full 180-degrees.  It’s certainly one of the best displays we’ve seen on a laptop costing £500, and it’s hard to fault the screen and build quality at this price. Even the speakers are quite respectable – there’s not much bass, but the sound is full and detailed and the volume levels are loud enough to be heard above the din in a crowded coffee shop. See also: What’s the best laptop 2014?

Inevitably, though, there are compromises involved in producing such an affordable laptop. It’s not particularly well connected, with only one USB 3.0 port, one USB 2.0, SD card reader and HDMI interface. However, it’s the performance of the Yoga 2 that may give you pause for thought.

Rather than the Intel Core processors used by most other Yoga models, the Yoga 2 is equipped with just a humble Pentium processor. The Pentium N3520 used here is a quad-core chip with 2.16GHz clock-speed, but it’s no match even for an entry-level Core i3 processor and only manages to produce a score of 1968 points when running the general-purpose PCMark 7 benchtest. The 5400rpm hard drive isn’t much help either, and the Yoga 2 takes several seconds to wake from sleep, and 20 seconds to boot even when using the Windows 8 ‘fast start’ option. To be fair, the Yoga 2 is perfectly adequate for basic tasks such as web browsing, streaming video or word processing. The 4GB of memory and 500GB hard drive will also allow you to run a wide variety of apps, as well as storing plenty of music, photos and videos. However, it will struggle with tasks such as video-editing or preparing video-based presentations. It couldn’t even install our Stalker gaming test, so 3D games are pretty much off the agenda. There is a 13-inch version of the Yoga 2 available with a Core i5 processor and solid-state drive, but that doubles the price to £1000.

On the bright side, the Pentium processor turns out to be more power-efficient than we’d expected. Lenovo quotes battery life of ‘up to six hours’, but the Yoga 2 actually lasted for a full six hours and twenty minutes when streaming video off the BBC iPlayer, and you could probably stretch that to around seven hours if you’re not using Wi-Fi all the time. There are many Haswell laptops that can manage 8-10 hours with little difficulty, but the Yoga 2 still provides quite respectable battery life for a laptop in this price range.