Evenly matched on price, cameras and performance, the HTC One wins on storage and display, whilst the iPhone 5c may just edge it on battery life. Build quality and software are of a similar quality but different. But if you have no strong feelings on design or Android/iOS, you need to opt for the HTC.

The iPhone 5C is the cheaper of Apple’s current smartphones, but it’s not cheap. A 16GB model will set you back £469 inc VAT, and you have to shell out a further £100 for the 32GB model. So you’d have to be convinced that the iPhone was the better bet than the Android phone to opt for that handset. As you’ll see from the following analysis, that is by no means an obvious decision to make.

Compare that with the HTC One for which you have to shell out £467 inc VAT to pick up the 32GB flavour. SIM-free there is no contest, I’m afraid. Unless you really want the iPhone 5C, the better deal is the HTC One. Also see: 18 best smartphones: The best phone you can buy in 2014.

HTC One vs iPhone 5c: Screen

Screen size and quality is a great way to choose between two smartphones – you’ll want to pick a size that’s comfortable for you personally.

The iPhone 5C’s screen is still the 4in Retina display which was introduced with the iPhone 5. It looks crisp and colourful. Its 1136×640-pixel resolution is, at 326 ppi, plenty sharp enough. The iPhone 5C also has a multi-touch display with scratch-resistant glass.

Although the HTC One has a 4.7in screen, the handset doesn’t feel too large in the hand. And that display is worth the extra bulk. It’s a Full HD (1080 x 1920) resolution display, giving a pixel density of 469pp. It is a staggeringly sharp display.

If you are choosing on display you’ll go for the bigger, sharper screen. And that’s the HTC One.

HTC One vs iPhone 5c: Build and design

With the iPhone 5C Apple took its successful iPhone 5 handset and gave it a colourful new coat of paint and a plastic casing. There are five colour options: white, blue, pink, yellow and green.

The iPhone 5C has a polycarbonate plastic casing. As a 9mm phone the iPhone is quite big for today’s superthin standard but the 5C doesn’t feel thick or chunky in the hand. In that respect it’s a winner: this is the most ergonomic iPhone since the 3GS.

The HTC One shares the metallic straight sides and rounded corners of the iPhone 5s. It looks rather like the back of the iPhone 5 but with a screen in between the top and bottom strips. In terms of build quality, it is one of the best smartphones around. The HTC One is put together beautifully with a combination of aluminium and glass.

The HTC measures 68 x 137 x 9.3mm and weighs 143g. The iPhone 5c is 124 x 59 x 9mm and weighs just 132g. It’s the smaller, thinner and lighter phone. Clearly this is a personal thing – the point is that both phones are well designed and built to withstand the rigours of regular use. The iPhone 5C is smaller, thinner and lighter. The HTC One smarter and more expensive looking. 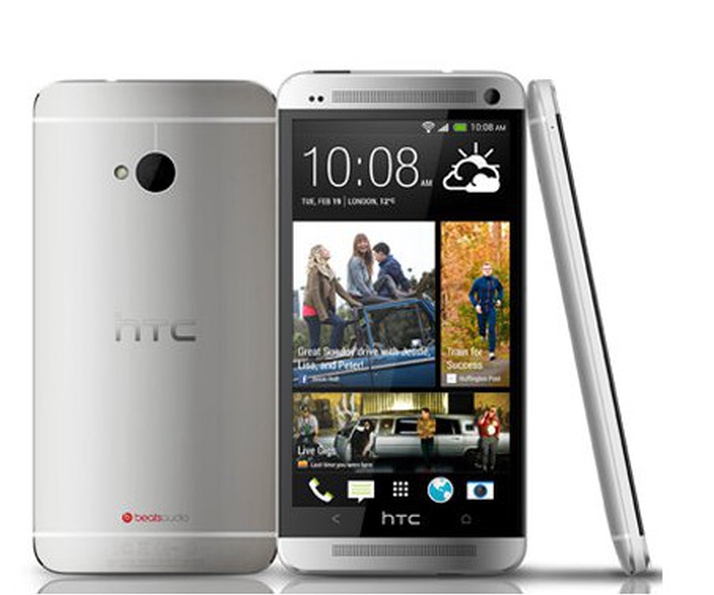 The iPhone 5C has an A6 dual-core processor with a 1.3 GHz clock speed, coupled with 1GB of RAM.

iOS 7 running on the iPhone 5C feels smooth and responsive. Apps and web pages load swiftly, and panning around Apple Maps isn’t jerky at all. It feels like you’re using an up-to-date smartphone despite the year-old components.

HTC’s One smartphone continues to impress with its benchmark results. Thanks to its Qualcomm Snapdragon 600, 1.7GHz quad-core processor and 2GB of RAM, it aced our GeekBench 2 test with a record clinching score of 2721 points.

It also managed outstanding results in GLBenchmark. The HTC One got 34fps which suggests it will play high-end games nicely. And a Sunspider test result of 1213ms suggests that javascript performance is no problem.

These are both superfast smartphones. We’ll call this one a draw.

HTC One vs iPhone 5c: Storage

With no expandable storage available on the HTC One or the iPhone 5C, storage is an area to consider closely. The iPhone 5C is available in two storage options – 16- and 32GB. Our 16GB version had 12.6GB available out-of-the-box. In addition, of course, you get a free iCloud account.

The HTC One has two storage options, offering just 32GB and 64GB capacities.

So in terms of storage you’d have to opt for the HTC One.

HTC One vs iPhone 5c: Cameras

The iPhone 5C has two cameras. A front-facing FaceTime camera that takes 1.2Mp photos and allows for 720p HD video recording. Around the back is the main 8Mp camera with LED flash. It can capture 1080p HD video and comes with great features such as a hybrid IR filter, autofocus, face detection and a panorama mode.

Indeed, the 5C has the same 8Mp iSight rear camera as the previous model and so you can rest assured that pictures and video will be high quality. Since iOS 7 comes pre-loaded on the 5C, you get the new camera app which has a square photo mode, filters. We kept accidentally taking multiple pictures by pressing the shutter button for too long.

The HTC One’s main camera is rated at ‘just’ 4Mp. But this Ultrapixel camera lets in more light and is great in low-light situations. It can record video at 1080p. There’s also a front-facing camera  with a 2.1Mp sensor – this can also capture 1080p video at 30fps.

Both handsets have good but not great smartphone cameras.

HTC One vs iPhone 5c: Software

The HTC One comes with Android 4.1.2 Jelly Bean with HTC’s Sense 5 overlay. This is a great operating system that offers a slick user experience and access to the Google Play store.

The iPhone 5C comes pre-loaded with Apple’s latest mobile operating system, iOS 7. It’s clean and light and much more colourful than previous versions of Apple’s mobile operating system. New features include the much-needed Control Centre, apeing the similar feature Android has had for a long time. A swipe up from the bottom of the screen opens a menu from which you can control settings such as Wi-Fi, Bluetooth, screen brightness, media playback, AirDrop and some quick apps.

Multi-tasking has also has a significant update and no longer just shows a row of open apps at the bottom of the screen. Now you see a preview screen of the running apps and can flick one upwards off the screen to close it. It’s something like a cross between Android, WebOS, PlayBook OS and Windows Phone.

Apple has tweaked the Notification Centre so it’s split into three sections: Today, All and Missed. It’s also accessible from any screen, including the lock screen. Other improvements have been made to Safari, the App Store, Siri and more.

You won’t regret choosing either Android or iOS, but unless you have strong feelings either way it is unlikely to be the factor on which you make your purchasing decision. We still think that iOS offers the best mix of apps, stability and security, but Android has come a long way and offers more cutomisation and a choice of stores from which to purchase media.

It’s worth noting that neither the HTC One nor iPhone 5C has a removable battery. Each phone offers decent smartphone battery performance of one to two days with an average usage, although in our experiece the iPhone 5C is marginally better. The HTC One has a non-removable battery rated at 8.5Wh, a 2300mAh-capacity cell. With regular use it lasted a little over a day.

We’ve been impressed with the iPhone 5C’s battery life. Unless you hammer the device with contant gaming or video playback, it will last a couple of days with regular and varied use. The phone holds its charge incredibly well when not in use – our sample sat on just one percent for a number of hours.