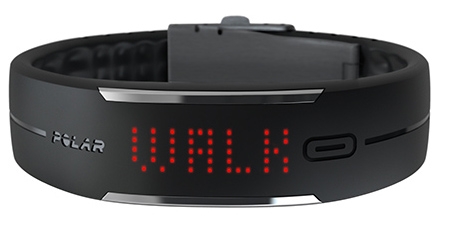 The Polar Loop is a cool-looking activity tracker that’s lightweight and comfortable and gives you up-to-date stats right there on your wrist – something the comparably priced Fitbit Flex can’t do to the same degree. We didn’t like the fact that you have to cut the wristband to size and we found set up to be overly fiddly. Polar also needs to update the app as ours crashed frequently while syncing. It’s a shame as with a more intuitive strap setup we would recommend the Polar Loop as its display is better than that on the Fitbit Flex. If you want to go the extra fitness-tracking mile then the Polar Loop has the unique feature of working with the company’s £50 heart-rate sensors, which will excite the more serious sportsperson. With the heart-rate sensor option and the fact that it’s waterproof for swimming the Polar Loop should really appeal to the multi-sports crowd.

Polar is a Finnish company that has been in the fitness business for over 30 years, quickly establishing itself as the leader in portable heart rate monitors. With its Polar Loop the company is entering the competitive activity trackers market that is booming right now, with many new wearable tech products entering the sector since the start of the year.

Fitbit is the market leader with its Force, Flex, One and Zip trackers. However, the company has stumbled recently, having to take its Fitbit Force activity tracking wristband off the market following reports of some users suffering allergic reactions from the underside of the band. While this is a shame as it was our favourite tracker wristband it does leave the door open for other similar fitness trackers. The Polar Loop’s closest Fitbit equivalent is the Fitbit Flex.

See also: The 10 best activity trackers you can buy

The first popular activity-tracking wristband was Nike’s FuelBand, and the Polar Loop is closer in looks and operation to that tracker than it is to the Fitbit products.

Polar started its fitness tech business in 1977 with a fingertip hear-rate monitor. In 1982 its Sport Tester was the world’s first wireless wearable heart-rate monitor, which took the form of a wristwatch and could therefore be considered one of the world’s first smartwatches. In 2007 its Polar AW200 activity watch was first to market with a wrist-based activity tracker that measured activity through body movement.

You can see that Polar is no novice when it comes to fitness-based wearable tech but it faces stiff competition from the likes of Fitbit, Nike, Jawbone Up and Samsung Gear 2 when it comes to mainstream non-sports-based activity trackers.

The Polar Loop uses its own motion-analysis technology to track all the moves you make during the day. Its smart display and smartphone app (above) and desktop dashboard then show you how you’re doing in reaching activity goals for the day.

Let’s get the bad news out of the way before we sing any praises. Setting up the Polar Loop was not as easy as all the other activity trackers we’ve tested. In fact we found it fiddly and worrying.

It comes with an integrated wristband but you need to measure your wrist and then take a pair of scissors to the band to cut it to the correct length for you. It is not a great sign that the first thing you have to do once a new product is out of its box is start cutting it with scissors. It’s OK while you need to keep cutting it but there’s no way back if you snip it too short, although Polar says it will replace if you snip it too much.

You then need to reattach the clasp using the small supplied tool. Some people might be good with this sort of thing but I am not, and it took me nearly half an hour to get the clasp’s tiny pins into place.

Why has Polar made this such a fiddly procedure? Fitbit ships two sized wristbands with its Flex and sells the Force with either a large or small band that you adjust simply by the fixed clasp with the appropriately spaced holes.

Polar’s fiddly metal clasp and requirement to physically cut the wristband to the right length are unnecessary design flaws. There’s a video here so you can gauge whether this is something that you’d be able to handle with ease.

(If you badly butcher your Loop wristband within one month of the purchase date Polar syays you should contact its Customer Care or the place where you bought it to have it serviced for free.)

Thankfully setting up the app and online account were easy.

The Loop displays daily activity, calories burned and steps taken. Handily it also shows you the time of day so you can ditch your watch rather than have two devices strapped to your wrist.

Polar Loop uses an accelerometer to record your wrist movements. It analyses the frequency, intensity and irregularity of movements together with your physical information that you input online.

One great feature of the Polar Loop is when it reminds you that you’ve been still for too long. It’s all very well reaching your 10,000-step target but if that’s achieved at the start and/or end of the day you’re missing out on getting fit during the bulk of the day. If the Loop gets you out of your chair and more active during the day then it’s earned its keep right there.

The Polar Loop doesn’t include an altimeter like the Fitbit One and Force so it won’t measure the number of flights of stairs you manage to climb every day. This isn’t a great loss, but I did find myself taking the stairs more when using the Fitbit Force and Fitbit One.

Sleep tracking: If you wear the Polar Loop at night it will track your sleep. Unlike with the Fitbit trackers you don’t need to tell the Loop that you are going to sleep. Instead it estimates when you are sleeping from your wrist movements. It calculates your sleep time from the longest continuous rest time with 24 hours. While this means that you won’t forget to activate the Sleep function it does make it slightly less accurate. Also, for Polar sleep is sleep – compared to Fitbit’s monitoring of “sleep efficiency” that includes waking and restlessness during the night.

Another feature we’d like to see on the Loop, which you do get with most of the Fitbits, is a vibration motor to alert you when you’ve reached your goal or to use as an alarm clock. It could also give you a buzz every time it issues an inactivity alert to get you out of your seat.

What really sets the Polar Loop apart from the other activity trackers is its compatibility with Polar’s heart-rate sensors.

Uniquely the Loop is compatible with the Polar H6 and H7 Bluetooth Smart heart-rate sensors (priced from around £50; see image below).

By wearing a compatible Polar heart rate sensor with your Polar Loop, you’ll get more accurate information about your activities – especially non-step sports such as cycling – and also get comprehensive heart rate training analysis.

This can transform strenuous non-step activities. For example a 20-minute rowing session would log as just a few hundred steps on most activity trackers – and indeed the Loop without the heart-rate sensor. But combined with the wearable heart monitor it registers 8,000 steps.

It is also better than the Fitbits at tracking strenuous activities such as swimming. The Polar Loop is waterproof up to 20m and will estimate your activity during such pursuits.

You wouldn’t want to wear the chest-strap heart monitor all day, however, and it will drain the Loop’s battery much faster. But the combination is perfect for intensive sessions.

The Polar Loop hardly weighs a thing and is so comfortable that you’ll soon hardly be aware you’re wearing it.

The metal clasp is a bit annoying as it can clank on the desk while you type, and is another reason Polar should make the whole strap a simpler affair.

The Loop’s display is super cool. It has a bit of the Knightrider about it, with its red LED writing, and most people who saw mine thought it looked great.

It can take a while to scroll through the Loop’s display features – although it’s about the same speed as Fitbit’s Force.

The fact that the Loop displays the time makes its display more useful than the Fitbit Flex’s minimal dot display. I do prefer the Fitbit Force’s display, although whether that fitness wristband sees the light of day again – after its withdrawl due to skin allergies – is currently unknown.

The Polar Loop’s graphical stats via app and desktop dashboard look fantastic, and are more detailed than Fitbit’s.

The app shows your activity through a set of coloured and hashed shades from Not Worn to High through Resting, Sitting, Low and Medium levels of activity. It also lets you know what percentage you are through your Daily Goal, and makes suggestions on how you could quickly reach your goal – eg. 43 minutes of squash, 2 hours 6 mins of “gentle dancing” or even 3 hours of cleaning or baking. Just don’t eat the cakes after the baking…

Also shown on the app are Polar’s estimate of calories burned, the number of steps, Active Time, and time spent asleep.

Polar’s excellent Inactivity Alerts are also shown, as is your weight that you need to log yourself. Seeing just how long you are sat on your behind is a great motivator to get up more during the day.

We did find the iPhone app prone to crashes, however, and sometimes slow to sync – in contrast to Fitbit’s more robust software. As with Nike’s FuelBand there’s currently no Android app, so is for iPhone users only. Fitbit has an Android app so may be the only choice for Android users.

The Loop will sync with the desktop stats dashboard when you plug it into your computer using the proprietary cable. The desktop Progress charts also include a calendar diary to keep track of your data over time.

The Loop’s battery lasts around 6-7 days, depending on how many times you access its screen, and a few other factors such as getting it wet (its capacitive touch button is activated by water) and the temperature. The Fitbit Flex has a battery life that we found just slightly shorter at 5-7 days.

The Polar Loop is a welcome addition to the activity tracker market. It looks and works rather like Nike’s FuelBand, and – apart from its fiddly set up – we prefer the Loop.

Its design and display are cooler than the Fitbit trackers, but we still preferred the overall package of the Fitbit Force (sadly currently unavailable for sale).

In terms of price the Loop is comparable to the Fitbit Flex, both selling for £79. The Loop has a better display than the Flex but lacks its handy buzz alerts. If you prefer to see your stats right there on your wrist then you need to choose between the Polar Loop and the Nike FuelBand, while the Force remains off sale. The Fitbit One and Fitbit Zip are clip-on trackers, rather than wristbands.

All the other activity tracking wristbands are much easier to set up than the Loop, which requires you to physically cut it with scissors at the outset. This process might not faze you, but we found the procedure overly fiddly.

We like the fact that the Loop at least tries to measure non-step activities such as swimming, and its waterproof design is a bonus not shared by the Fitbits.