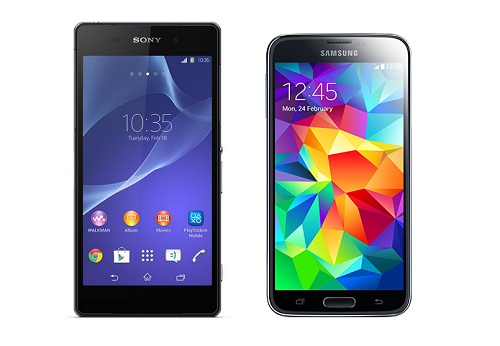 The Samsung Galaxy S5 and Sony Xperia Z2 are very closely matches smartphones – in price and many hardware features. It’s tit for tat with only a few things separating the two. The Galaxy S5 has extra features in the fingerprint scanner and heart rate monitor while the Xperia Z2 has a more premium feel and a simpler software interface.

If you’re looking to get one of these smartphones on a contract then you’re going to have to pay through the nose. Carphone Warehouse is offering the Xperia Z2 for free on contracts starting at £47 per month. The Galaxy S5 is likely to be in the same ballpark.

It’s easier to compare the SIM-free prices which are much more static. Sony’s official price for the Z2 is £599 but retailers such as Clove have the device listed at £550. Samsung hasn’t announced the price for the Galaxy S5 but retailers have it pegged at around the same £550 mark. Read: Galaxy S5 price and where to buy in the UK.

With pricing looking pretty well matched, read on to find out how the Galaxy S5 and Xperia Z2 differ.

Sony has been producing dust- and waterproof phones (and tablets) for a while now, almost exclusively and the Xperia Z2 is no exception. However, Samsung has gone down that route with the Galaxy S5 to rival Sony. They have ratings of IP58 and IP67 respectively and although it might seem like the Galaxy is better since it has a higher number, this isn’t how it works.

The first number relates to dust protection and the second to water. So the Galaxy S5 is better at keeping out dust (completely dust tight), but the Z2 can be submerged deeper in water (over a meter). So there is no clear winner here.

One thing we do worry about is the fact that the Galaxy S5’s rear cover is still removable so if it’s not clipped into place properly a seal won’t be made and water will easily get in. The Z2 only has port covers which are easy to see when not clipped in.

Size-wise, the two devices are very similar with both just over 8mm thick but the Z2 is taller and heavier than the Galaxy S5. The latter is the main drawback because the Xperia Z2 weighs in at 163g, nearly 20g more than its rival which is a lot in smartphone terms.

You’ll instinctively know which you prefer the look of but we’ll point out that the Xperia Z2 uses a combination of aluminium and glass while the Galaxy S5 has a more plastic design with its ‘perforated’ cover.

We’ve had hands-on with both these smartphones and the Xperia Z2 retains Sony’s top-end luxurious feel but the Galaxy S5 doesn’t feel particularly premium.

Things are pretty similar when it comes to the screen on these two smartphones. Both have Full HD resolution, which we’ve come to expect from top-end handsets and they are only 0.1in different in size. The Galaxy S5 has a 5.1in screen while the Xperia Z2 has an LG G2 matching 5.2in display.

This means the Z2 has a marginally lower pixel density but the difference is essentially negligible. Samsung uses its favoured Super AMOLED technology while Sony employs its own Triluminos and X-Reality.

We haven’t seen the two side by side so it’s hard to call a winner but you’re best off choosing between these two in different areas since the screens can both be considered top-notch.

You needn’t look too far into this area either as the Xperia Z2 and Galaxy S5 are two of the first devices with Qualcomm’s new Snapdragon 801 quad-core processor and the Adreno 330 GPU. A small difference is that the Galaxy S5’s is clocked higher, at 2.5GHz compared to 2.3GHz on the Z2.

The Xperia Z2 does have 50 percent more RAM than the Galaxy S5, though at 3GB – something which could well come in handy.

We will test out performance thoroughly when we get review samples of each but going by the specs, both devices will be outputting top-end performance.

Strangely, the Xperia Z2 only comes in a single storage capacity – a pretty standard 16GB. Meanwhile the Galaxy S5 will also be available in a 32GB size although we haven’t seen this advertised anywhere yet.

Both smartphones offer expandable storage by way of a microSD card slot but the Galaxy S5 has another one up here since it can accept up to 128GB cards – double that of the Xperia Z2.

AS you would expect from high-end flagship smartphones, the Xperia Z2 and Galaxy S5 come with the latest wireless technology: 11ac dual-band Wi-Fi, Bluetooth 4.0, NFC and Cat 4 LTE 4G. However, there are some differences to point out.

The Galaxy S5 has microUSB 3.0 which means faster charging and transfer speeds but the Xperia Z2 is equipped with MHL 3.0 which supports 4k video output. Samsung’s new flagship also has an infrared transmitter for controlling devices like your TV and a download booster which combines your Wi-Fi and 4G connection for faster speeds.

Read our: Galaxy S5 vs All New HTC One 2014 comparison review: Samsung Galaxy 5 underwhelms… what has HTC got?

We’ve added this section because the Galaxy S5 has two key items of hardware which might tempt you to opt for it over the Xperia Z2. They are a fingerprint scanner, similar to the iPhone 5s, and a heart rate monitor.

The latter does exactly what you’d expect it to and is on the back below the camera. Samsung’s fingerprint scanner requires a swipe gesture and can be used (currently) for three different tasks: unlocking the Galaxy S5, accessing a ‘private mode’ (see software section) and authorising mobile payments.

If those don’t float your boat then perhaps the Xperia Z2 can tempt you with its stereo speakers (one driver at each end of the phone) and the fact it comes with noise-cancelling headphones (MDR-NC31EM) worth around £40.

There’s little difference when it comes to front facing cameras for those selfies which are all the rage. The Galaxy S5 is sporting a 2Mp webcam while the Xperia Z2 is rocking a 2.2Mp shooter. Both can shoot video in 1080p quality.

However, there is a bigger difference when it comes to the main cameras. Samsung has pumped things up to 16Mp for the Galaxy S5 while the Xperia Z2 keeps its predecessors 20.7Mp camera with Sony’s Exmor RS sensor. That’s not the end of the story though because even though Samsung uses a smaller 1/2.6in sensor compared to 1/2.3in it has a 1.12µm pixel size so the amount of pixels isn’t the end of it.

We couldn’t test the cameras out enough at MWC to tell you which is better so we’ll reserve that for our full reviews. Of course each has their own features which you might find swings it. To name just some, the Galaxy S5 has super-fast auto focus and a Lytro-style selective focus mode. Meanwhile the Xperia Z2 has its fun augmented reality mode and Sony has included a dedicated camera button which we always like to see. It can be used to launch the camera app and take photos.

The Galaxy S5 and Xperia Z2 each come pre-loaded with the latest version of Android, 4.4.2 KitKat. But don’t go thinking that they are the same. Far from it, Samsung and Sony load their own user interfaces which look and feel quite different.

On the whole, it’s a personal preference thing so we don’t want to say one is outright better than the other.

Sony’s still looks much the same as is it has done for a while with only some minor tweaks. One could argue don’t fix it if it aint’ broke. Sony’s interface is stylish, easy to use and comes with a good amount of decent wallpapers, widgets and the like. There’s not really anything to aggravate here but there’s arguably a lack of extra features.

Samsung’s TouchWiz interface also looks similar to previous versions, on the surface at least. However, the Galaxy S5’s interface has been cleaned up quite a bit and looks more sleek with its round icons in the notification bar and settings menu. The firm’s love it or hate it Magazine feature is one swipe from the main homescreen.

While Sony keeps things simple, Samsung adds plenty of features like smart pause, smart stay, multi-window and many more. User will either find these the best thing ever or a bit overwhelming. Private mode, which we mentioned earlier, is a new one which is a way of keeping personal content to yourself. There’s also a kid’s mode which limits access for those younger users who will be using the phone.

Two very different approaches to software so it depends what kind of user you are as to which will suit you best. Our advice is to head to a shop like Carphone Warehouse or Phones 4U where you can try them out before buying.

On paper the Xperia Z2 will offer better battery life with its 3200mAh battery. The Galaxy S5 has a smaller 2800mAh which, unlike its rival, is removable. These numbers don’t automatically dictate the outcome though.

Both Samsung and Sony have implemented battery saving software on their smartphones. The Xperia Z2 has its Stamina mode which switched off battery draining functions like Wi-Fi when the screen is off and, like most phones, has a low battery mode. Samsung says that its Ultra Power Saving mode, which switches the screen to black and white only and just offers essential features, means the Galaxy S5 can last for up to 24 hours on 10 percent of battery.

It looks like another close call area and we’re looking forward to testing out the battery life of each when we get our review samples.