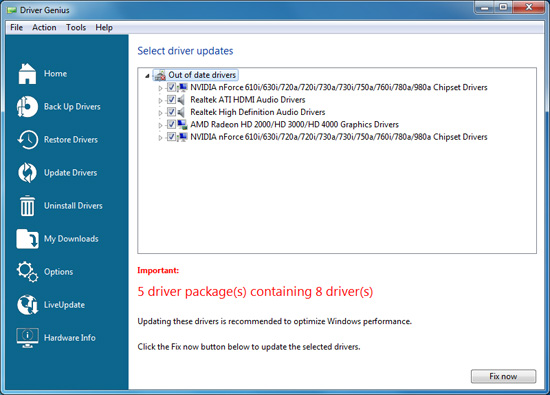 Avanquest Driver Genius 14 Professional does very much what it claims. It quickly scans you PC for out-of-date drivers and downloads and installs those that need replacing, taking the effort out of doing it manually, device by device. Avanquest has priced the product sensibly and it forms a worthwhile part of any Windows maintenance regime.

A surprising number of problems on a Windows PC can be traced back to drivers. These small programs sit between the operating system and pieces of hardware, enabling the two to communicate. Without a driver you wouldn’t be able to print pages, listen to music or watch videos.

Keeping them up to date is a continuing task, as new updates are regularly released to take advantage of new features, or to correct bugs and other problems.

Driver Genius 14 Professional aims to take most of the pain out of the update process, by automatically scanning your system and downloading updates from its own database of over 100,000 drivers. Although this is large, there’s still a chance that drivers for more obscure hardware may be missed and not be flagged up for attention.

The control screen is simply and logically set out, with a simple menu down the left-hand side and status reports and controls in the corresponding panel on the right. Although most information is shown as text, this is easy enough to understand and it’s simply a question of selecting the drivers the program flags up as needing updates.

We ran Driver Genius 14 Professional on our test PC. It spotted five drivers that needed attention, including those for the graphics adaptor, sound chip and ethernet adaptor. We hadn’t noticed any problems with these components, but some of the drivers were over a year out of date.

The scan took around 30 seconds, an improvement over the last iteration of the software we reviewed and one of the claims Avanquest makes for version 14. The update process was more long-winded, with each of the drivers downloaded separately from the Driver Genius server and then installed on request, from the program’s management screen.

Each driver is installed from its normal installation package, so the AMD video driver originally came from AMD and the chipset driver came from nVidia. Any vagaries in the installation are the same as if you’d downloaded the drivers manually, from their respective sites. As this is Windows, you are asked to restart your PC after each installation, but if you’re updating multiple drivers, you can defer this until you’ve completed all the installations.

The software can be set to create restore points before updating drivers, so if anything goes wrong, you can revert to what you had before. One possible problem with driver updates is installing a driver for a slightly different version of  a particular chip than the one installed on your machine. Differences in nomenclature can make this difference.

Using Driver Genius 14 Professional largely removes the wrong-driver problem by conducting its own scan of what’s needed, but there are secondary functions which also help prevent erroneous driver being installed.

The program can back drivers up and restore them, as an extra precaution against system failure. If you do need to reinstate your system, you can restore the latest versions of all your drivers, too, without having to download them all again.