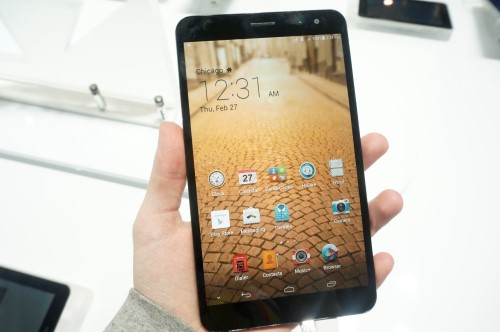 The MediaPad X1 is a really nicely designed 7in tablet from Huawei. However, we wish it was simple a tablet with a Nexus 7 rivalling price tag. Not a confusing ‘phablet’ with its phone functions.

Huawei normally launches cheap, cheerful and plastic devices but it has step things up a level with the new MediaPad X1. The Chinese firm claims it’s the most slender tablet in its class so we’ve taken a look at MWC in Barcelona. See the  best tablets.

The X1 is certainly narrow and is very easy to grip with one hand. The tablet is both thin and light too at 7.2mm and 239g. Instead of plastic, the rear cover is mostly aluminium but it does have plastic strips at the top and bottom. Remind you of a certain iPhone? See also: New Nexus 7 review

It’s sleek and slender design make the X1 feel premium and that’s good when you consider it has a price tag to match. Huawei tells us the MediaPad X1 will launch at around €399 in the next couple of months.

Some of your money goes towards the ability to call, message and use mobile data. That’s right, the X1 is a phablet rather than a straight up tablet. It’s got a slot for your SIM card but we’d rather the device was just a tablet at a lower price point. 7in is just too big for a device to be a phone even if it does serve as a tablet too.

The price is a little high but you do get some decent hardware kicking off with a gorgeous 7in screen which has a Full HD resolution. It’s an IPS panel so viewing angles are great and we found the screen to be nice and responsive. You can also control the screen’s colour temperature which is unusual.

Inside is a 1.6GHz quad-core processor with 2GB of RAM and 16- or 32GB of storage. There’s also a microSD card slot for adding more.

Subject to proper testing, the X1 has one of the best rear cameras we’ve seen on a tablet. The 13Mp sensor, which has an LED flash, took some nice shots on the show floor. The webcam on the front is also high spec at 5Mp.

Software comes in the form of Android 4.2.2 Jelly Bean with Huawei’s Emotion UI 2.0 over the top. This has its pros and cons like other overlays. We don’t like the fact that the app menu has been discarded so all icons must be kept on the homescreens – thank goodness for folders.

If you can get past that then Huawei’s interface is hugely customisable with different themes which change the overall look including colours, icons, wallpaper and more. There’s plenty to choose from and download so you’re bound to find something you like.

A neat feature is the ability to hide the navigation buttons which are at the bottom of the screen. Handy for when you want to use all the real estate for reading, web browsing, watching videos and similar tasks. Getting them back only requires and simple and intuitive swipe from the bottom.

The MediaPad X1 also come with a ‘Phone Manager’ application which lets you keep on top of things with a power saver, storage cleaner, permission manager, harassment filter and more.

The battery is an interesting area of the MediaPad X1 so we’re keen to test this out in the lab. Huawei claims that in general use, the large 5000mAh battery can last between 20 and 25 hours. Specifically it can last for 15 hours of web browsing or playback of eight locally stored films. The tablet can also be used to charge other devices with its Reverse Charging function – potentially a life saver.