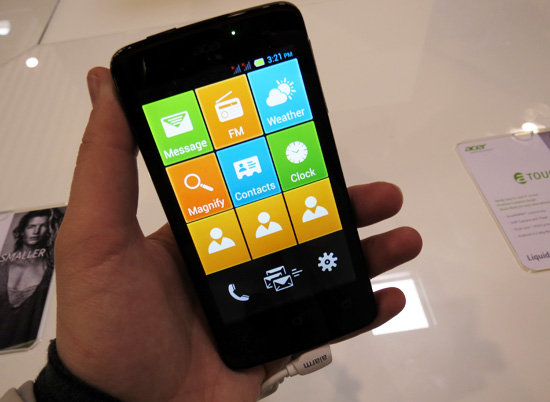 Overall, for such a small price-tag, the Liquid Z4 is a good little smartphone for carrying out basic tasks such as emails, social networking or browsing the web. It’s a good little snapper, too, so those who enjoy taking photos to share on Instagram or Facebook will enjoy the quality of the camera. However, we’d still consider opting for the Motorola Moto G if your budget can stretch an extra £50. It has a much better display, processor, and capacity, and can run the newer KitKat version of Android (though Acer has promised a KitKat upgrade for the Liquid Z4 at some point).

Acer has used MWC 2014 to launch two new budget smartphones, the Liquid E3 and Liquid Z4. We’ve had some hands-on time with both models, but here we’re focusing on the cheaper of the two: the Z4. Find out what we thought of the Liquid Z4 and how it compares to the excellent Motorola Moto G in our hands-on review.

The Liquid Z4 is a compact smartphone made with the pocket in mind, sporting a 4in display with a pretty dismal resolution of 800 by 480. We found the quality of the display to be quite poor, and the colours seemed a little dull. It’s not uncommon for budget smartphones to be lacking in the display quality department, but the Moto G, which costs just £55 more than the Liquid Z4, packs in a HD 720 by 1280 resolution in its 4.5in display.

Aside from the display, the overall design and build-quality is good for a smartphone that costs less than £100, with a smooth, rounded back that feels nice to hold, and pleasant red detail around the camera lens of the black model (it’s also available in white). There’s no denying that it does look budget, though, and we much prefer the look of the Moto G.

On the back of the Liquid Z4, just beneath the camera lens, there’s a small button that Acer calls the AcerRAPID. This feature is designed to make one-handed use easier to achieve, as it can be used to access the camera, answer calls, and launch pre-defined apps. We found the AcerRAPID button to be quite useful and a neat little extra that adds some further practicality.

The rear camera is 5Mp with an LED flash, and, combined with Acer’s camera app that uses a clever colour balance tool to help take better images, the photos we took were definitely satisfactory and for a sub-£100 smartphone we’re impressed.

Inside, the Acer Liquid Z4 has a dual-core 1.3GHz processor and 512MB of RAM, which is quite standard for such a cheap smartphone. There’s just 4GB of internal storage and no MicroSD slot, which is a bit of a concern as that’ll disappear quickly if you start taking photos or downloading new apps.

There’s a basic mode, a child mode with restrictions and a senior mode with the ability to make icons bigger, for example. We actually found the Windows Phone-esque Quick Modes more difficult to get used to than the normal interface, but that could change after spending some time with it.

There’s also the AcerFLOAT interface that acts as a way to switch between apps while multitasking.

Acer is planning to release the Liquid Z4 in April. It costs 99 Euros, which is about £82.