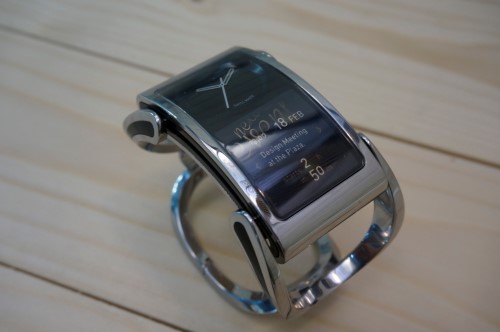 The Ibis is a nice idea for a smartwatch, separating the clock face and the touchscreen and bringing some class. It is a little bit too big and heavy so we hope if it comes to market, this will be addressed.

Smartwatches can be great but all the designs we’ve seen so far have plastic and many are unlikely to appeal to fashion conscious consumers. Finnish firm aims to combat this with its ‘wearable jewellery’ smartwatch called the Ibis which we saw at MWC.

“We believe the demand for smart watches will be driven by fashion and sport brands, and the Ibis exemplifies the type of product that we create for fashion brands” said Pekka Väyrynen, CEO of Creoir.

It’s important to note that the Ibis is a concept product so we only took a look at a prototype and tried a sample interface on a different device. Creoir works with other brands which have included Nokia and Jolla. See also: Samsung Gear 2 Neo review.

So the Ibis will come to market, potentially by this Christmas, if the firm can find willing partner(s) to take on the design. Creoir is in talks with both watch and jewellery manufacturers although it’s under wraps which ones.

The first this to point out is that it doesn’t look like any other smartwatch on the market. It’s crafted from stainless steel and crystal with the shape inspired by ‘a flying bird whose wing tips touch together while carrying a young bird on its back’ it also symbolises the ‘precious and personal current of information on your smartwatch’.

I’m no fashion expert but the main issue with the design seems to be the weight. The Ibis is a weighty piece of kit so I can’t imagine women being happy to wear it all day. Remember it’s a concept so this could change.

The feminine design doesn’t appeal to me, but I can appreciate how good looking this thing is. Watches are a statement item these days and the Ibis certainly ticks that box. It might not look like it but the Ibis is adjustable in size. The watch part clips into the bracelet and then it can be made smaller by runners along the sides.

As we’ve mentioned, the Ibis has two faces. To explain this, the devices has an analogue quartz watch face with a touchscreen below it which is used for the smart element. The firm has decided to keep things simple so there are four functions: calls, messages, music playback and calendar reminders. These are all one swipe from the main screen.

As well as style, the Ibis packs in quite a bit of tech including Bluetooth 4.0 and USB. It’s also got an accelerometer, e-compass and an ambient light sensor. The device runs on a customized version of Android which is optimized for low power. Although the Ibis runs on Android you don’t need an Android smartphone since it is also compatible with iOS.

As we’ve mentioned, the Ibis is a concept reference design so if Creoir does find interested parties to bring the device to market, it could look different.