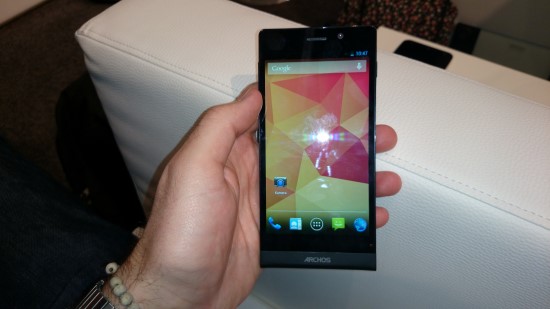 The Archos 50c Oxygen is a really sexy device that feels great in your hands, is nippy as hell and costs less than £200. It looks like it could be a great deal.

A Quad-core 5-inch HD smartphone for less than £200? You must be mad. But, that’s exactly what Archos is bringing to the table with the device which it has priced at £199. We got to spend some time with the mid-range smartphone at MWC 2014, here’s our Archos 50c Oxygen hands-on review. See also Samsung Galaxy S5 review.

What you notice straight away with the 50c Oxygen is just how light and thin the device is. This reviewer has been using a Sony Xperia Z1 recently and on the surface the two smartphones are pretty similar looking – however, the 140g and 145 x 69.8 x 7.64mm 50c specs of Oxygen make the Sony feel like a bit of a brick in comparison.See also: Sony Xperia Z2 review.

The engine room of the 50c Oxygen is a bit of a mixed bag in that it only has 1GB of RAM, but goes a long way to make up for that with its Quad-Core processor. The idea behind having a Quad-Core processor is to split the phone’s tasks between need for speed and power saving. So the Octa-Core is essentially made up of one beefy Quad-core processor for the heavy duty tasks and a less powerful quad-core for the simpler tasks, the result is an efficient smartphone that doesn’t use a cannon to kill a fly. In real world usage we found the 50c Oxygen to be a really nippy device, it was very responsive when flicking around the home screen, and apps opened and closed nice a rapidly. Take a look at the best smartphones too.

Also onboard is a 8GB of storage, which isn’t much at all, thankfully though there is also an mircoSD card slot so users can boost the space by up to 32GB relatively cheaply. 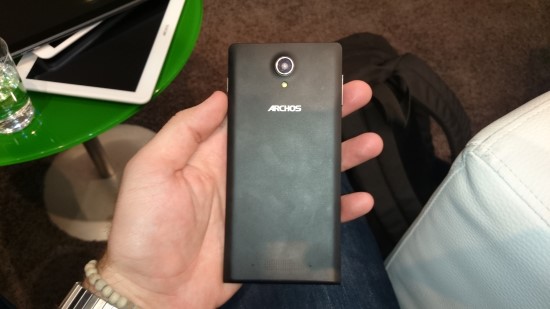 The plastic back picks up a few fingerprints, but feels nice and solid in your hand.

For those of us who use our smartphone as our main cameras, the 50c Oxygen is a bit of an under performer. It has a pretty standard 2MP front facing camera, for Selfies, Skype and Snapchatt, but the 8MP rear-facing camera that we got hands-on time with was pretty shocking with its focusing ability. We took a test image and tried to focus on the MWC 2014 label on a bag no more than 6-feet away, and after several attempts it was still producing a blurred mess. This is hopefully just a flaw with the sample 50c Oxygen at the trade show – we will pay close attention to this when we get the device in for a full review in the near-future.

The 50c Oxygen is running a pretty vanilla version of Android 4.3 Jelly Bean. It worked smoothly and there is nothing much to write home about with regards to additional software. It’s a little annoying that it hasn’t come with 4.4 Kitkat, seems like a bit of a cop out for a new device.