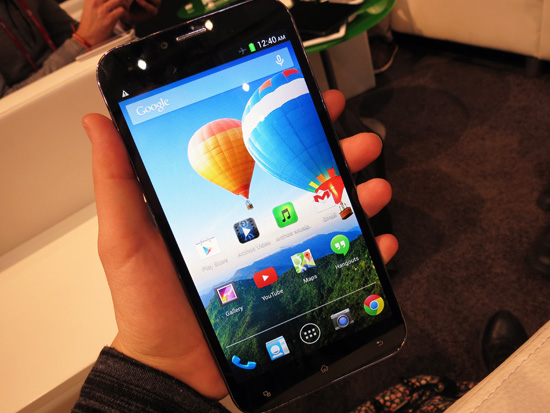 If you’re looking for a large phablet then you can’t get much bigger than the Archos 64 Xenon. It’s certainly not the best phablet we’ve seen, but we didn’t expect it to be as it only costs £199. For that price, you’re getting a well-rounded phablet with reasonable specs that’ll do the trick nicely if you’re on a budget and aren’t worried about top-of-the-range features and build quality.

Archos has used this year’s MWC to launch an all-new phablet device: the 64 Xenon. It’s huge, with a 6.4in display, yet it carries a price tag of under £200. Find out how we got on with the new Archos phablet in our hands-on review.

The first thing I realised when I picked up the 64 Xenon at the Archos stand at MWC was that it’s just a bit too big. With a 6.4in display and bezels that aren’t exceptionally thin, this phablet is a beast. I much preferred the 5.9in LG G Pro 2 because I was able to appreciate the big screen without it becoming uncomfortable to hold.

The Xenon didn’t feel particularly heavy, though. It weighs 196g, according to Archos, which is around the same weight as the 6.3in Samsung Galaxy Mega phablet.

The display itself is a HD IPS screen with a resolution of 1,280 by 720, and we found it to be crisp and accurate, despite the fact that it’s the same resolution as the Xenon’s 5in sibling, the Archos 50C Oxygen.

The brushed metal back of the tablet does look a little cheap and the overall design isn’t outstanding, with some strangely placed buttons on the back and a simple, unadventurous shape. But, it does only cost £199, which we think is very reasonable, particularly compared to the Galaxy Mega’s £399 price tag, and the 6.4in Sony Xperia Z Ultra that will set you back more than £450.

Inside the phablet is a Mediatek MT6582 quad-core processor that runs at 1.3GHz. There’s 1GB of RAM, too. We didn’t get to spend much time with the 64 Xenon, but in the time we did have we found it to be suitably speedy. It’s slower than the 1.7GHz processor found in the Archos Oxygen, though. The Xenon also has a Mali-400MP2 graphics processor. We’ll be putting the phablet through some more extensive speed tests when we do our full review.

There’s only 4GB of built-in memory in the 64 Xenon, but there’s a MicroSD slot that’ll let you add further storage.

The 64 Xenon’s large screen is sure to eat up lots of power, so Archos has given it a 2800mAh battery that should help. We’ll be able to test the battery life when we get to spend some more time with the Xenon.

The phablet’s rear-facing camera is surprisingly impressive, at 8Mp with an LED flash. We managed to capture some pretty nice photos using the Xenon, despite the poor lighting conditions at the stand. It can also record video at 1080p, while the front-facing camera is 2Mp.

Other features of the 64 Xenon include Dual SIM, HSDPA+ and Bluetooth 3.0.

The 64 Xenon runs the older 4.2 Jelly Bean version of Android, and Archos hasn’t yet said whether we can expect to see an update to 4.4 KitKat any time soon.

There’s no release date for the 64 Xenon from Archos yet, but it’ll cost £199 when it does arrive in the UK.