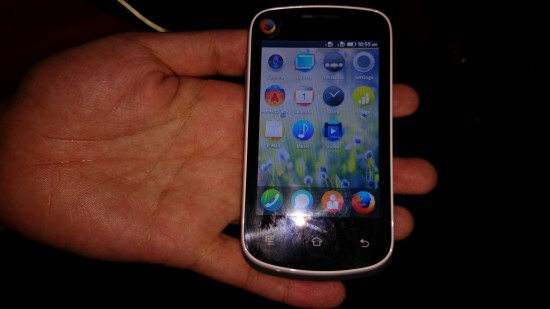 This has the potential to be a game-changing phone. The fact that it is dirt cheap means that its probable popularity in emerging markets will force developers to take note of the new HTML 5-based platform. In a nutshell, a smartphone that works and costs $25 is a brilliant thing.

Two years at MWC I had a one-to-one meeting with a incredibly energetic American developer from Mozilla and spent the next 45-minuntes trying to get my head around what he was talking about. Fast-forward two years to MWC 2014 and you have a $25 dollar smartphone running a Firefox OS and today I’m equally mystified, but this time only as to how Mozilla has managed to pull it off. I got to spend some time with the cheap phone – here’s the $25 Firefox smartphone hands-on review. See also Samsung Galaxy S5 review.

The first thing that you need to know about the $25 Firefox smartphone is that it’s not likely to be coming to Western shores anytime soon, it’s intended for emerging markets instead. Don’t let that dampen your curiosity though as it’s still a remarkable achievement for Mozilla and Spreadtrum Communications, the Chinese based chip developer for this phone. See also: Sony Xperia Z2 review.

$25 Firefox smartphone hands-on review: is it any good?

In a word, no. But it’s not meant to be good. By modern first-world standards, it’s a rubbish phone that doesn’t come with Spotify, nor can you Whatsapp your mates with it or sent rude pictures via Snapchat to would-be partners…yet.

What Firefox’s smartphone does let you do is browse the web, send emails, play music in the background and take pictures. On the device we played with, there were very few apps installed although we’re assured that the OS also has Facebook, Twitter, Wikipedia and Pinterest apps working already. Take a look at the best smartphones too.

The OS is built on HTML 5 technology, so even things like making a phone call on this smartphone are achieved thanks to lines and lines of HTML. We’re told that this should in theory make it easy for brands such as Facebook and Twitter to adapt their websites to make them compatible for the $25 Firefox smartphone.

The screen itself was incredibly impressive for a phone that is set to cost only 25 bucks, and the one picture we took with the phone, definitely produced a picture that was similar to what we intended to shoot, although it wasn’t the most detailed snap ever. Flicking around the home screen and opening apps was obviously a bit laggy as it took its time processing everything, but the main thing is that it got there in the end.

The phone look nice enough and while it didn’t feel completely solid, it was far from feeling cheap. We’d even go as far as saying the phone was desirable.

The fact that this phone is very much in its early days means that we couldn’t really do a lot we could do to test the smartphone, as there were no real apps installed. However, the very nature of this open HTML 5-based platform and it’s ludicrously cheap price tag suggests that once this does hit the shop floors, the sheer volume of first-time smartphone buyers will surely propel developers into action to create apps for this new platform.

Who knows, we might eventually see such phones coming to the UK. For less than the price of a round of drinks, there’s a lot to like.