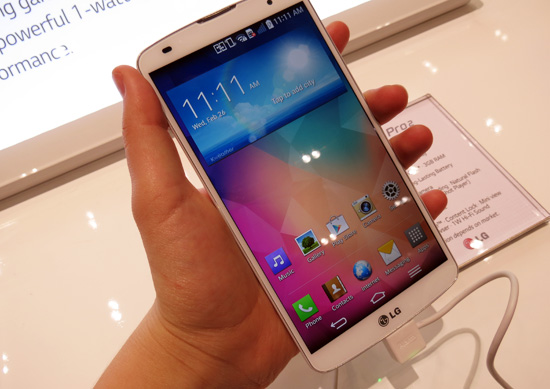 Overall, we were pleasantly surprised by the LG G Pro 2. It’s sleek, stylish and lightweight despite its huge display, and we love the stunning camera and thoughtful software within it. We really do hope that LG decides to launch it outside Asia at some point in the near future.

LG unveiled its G Pro 2 phablet earlier this month, boasting a whopping 5.9in display, 4K video recording and Android 4.4 KitKat. We spent some time with the device at MWC in Barcelona to find out how LG has tackled such an enormous phone for our hands-on review.

A follow up to last year’s ‘best smartphone of MWC 2013’ the G Pro, Lenovo’s new G Pro’s display has grown from 5.5in to 5.9in for version two. This also makes it 0.2 inches bigger than its close rival, the Samsung Galaxy Note 3.

I was dubious about the size of the device before I approached the LG stand at MWC, as I’ve always thought the idea of having such a big screen on a smartphone is a bit bizarre. However, upon picking up the LG G Pro 2 for myself, I was pleasantly surprised. It’s huge, yes, but even with my reasonably small hands I was able to hold and grip the phablet with ease.

That’s in part thanks to the incredibly thin bezels, which mean the device is actually only around 2.7mm wider than the Note 3, and exactly the same thickness at 8.3mm.

It’s just 4g heavier than the Note 3, too. I was pleasantly surprised by the lightness of the device – somehow LG has managed to make what should be a bulky, clunky device almost dainty and delicate. There are no physical buttons on the front or side of the phone, instead using the power key and volume key on the back of the device beneath the camera lens.

To unlock the G Pro 2, LG’s added Knock Code to the device – an evolution of the company’s KnockOn feature which now requires a series of predetermined taps on the screen. Apparently there are a total of 86,367 possible combinations, so it should be pretty secure. We found it easy to get used to, and liked the double-tap to lock feature too.

When it comes to actually using the LG G Pro 2 things do get a little tricker. One-handed use is pretty much out of the window, though LG has come up with a window-shrinking feature called ‘Mini View’ that should help here. We found it a bit odd at first, as the small, adjustable window sits on an otherwise black display, but it certainly solves the problem and we were able to thumb in a phone number without requiring both bands.

The huge display does mean that viewing videos, images and other media is delightful, and we especially love the simple, adjustable split screen mode that takes advantage of the big display to allow you to watch a film while typing a quick email, for example.

You can find out more about the new software features and other new features in the LG G Pro 2 our MWC hands-on video below.

We were really impressed with the 13Mp rear camera, which has optical image stabilisation (OIS) and can record video in UHD 4K and 120fps HD. Some new camera modes have been added, including Magic Focus, which takes a series of photos in quick succession to allow you to refocus your photo to your preference after you’ve taken it.

LG has even added a feature designed to help you take better selfies with the LG G Pro 2’s front-facing 2.1Mp camera. You get a white border around the viewfinder while taking a photo in this mode which is designed to provide better lighting.

The LG G Pro 2 has the same speedy 2.26GHz Qualcomm Snapdragon 800 quad-core processor found in the LG G2 and a whopping 3GB of RAM. Using the phablet felt effortlessly fast, and we’re hoping we’ll have the chance to put it through some further tests to see exactly how well it performs. See also: LG G2 review

There are 16GB and 32GB versions of the G Pro 2 available, and there’s a microSD card slot to allow you to add up to 64GB more.

The battery removable is 3200 mAh.

There’s no UK price for the LG G Pro 2, but that’s not a surprise because there’s been no confirmation that we’ll be getting this device in the UK, unfortunately. We’re keeping our fingers crossed, because it seemed to be attracting a lot of attention on the LG stand at MWC, so we’d hate to miss out on it.