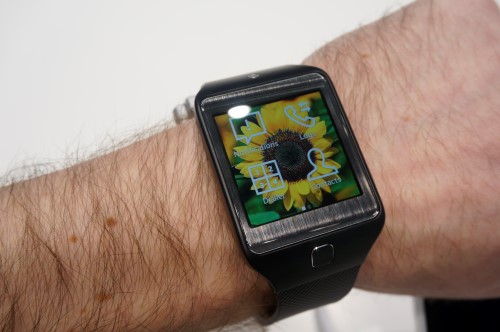 At a more reasonable price tag than the flagship model, the Samsung Gear 2 Neo is decent smartwatch with plenty of features – we don’t care about the lack of a camera. However, the need for a specific Samsung companion device and a limited amount of downloadable apps detract somewhat.

Samsung’s new range of wearable tech includes the Gear 2 Neo smartwatch. Read our Samsung Gear 2 Neo review to find out what this Tizen device has to offer. Read: The 8 best smartwatches: List of the best wearable tech you can buy right now.

At £169, the Neo is almost half the price of the flagship Gear 2. That’s a much more attractive price but it’s no surprise that things are a little cut down in comparison. The Sony SmartWatch 2 is still a but cheaper but it is older.

The Gear 2 Neo looks similar to the Gear 2 but doesn’t have the same brushed metal body. It doesn’t feel as premium, but it still looks good without feeling plastiky and cheap. Importantly, the lack of metal means it’s lighter and more comfortable.

The only other real downgrade is the lack of a built-in camera, but we’re really not fussed about this. We found the camera on the Gear 2 and Galaxy Gear to be novelties at best.

A standard strap size means that if you don’t like the supplied Samsung snap-style strap – which we’ve found pretty comfortable – then you can replace it with one of your choosing.

Other than the camera, specs remain the same when compared to the Gear 2. This means the Gear 2 Neo is much better value for money than its bigger brother.

It has the same dual-core processor, 512MB of RAM, 4GB of internal storage, a gorgeous 1.63in Super AMOLED screen, infrared transmitter and a heart rate monitor.

Like the Galaxy S5 smartphone, the Gear 2 Neo is dust- and water-resistant to an IP67 certification and comes in various different colours: Mocha Grey, Charcoal Black and Wild Orange.

That 1.63in Super AMOLED display (the same as the Galaxy Gear) looks gorgeous with good contrast and the eye-popping colour that we’re now accustomed to with Samsung products. It’s nice and responsive to the touch and unlike the Galaxy Gear, the Gear 2 Neo has a physical home button positioned below the display.

Like other smartwatches, the Gear 2 Neo connects to a companion smartphone over Bluetooth 4.0 Low Energy. You’ll need to have a compatible Samsung Galaxy smartphone though, of which there are 17. This is a real down point as anyone with a non-Samsung device will have to look elsewhere.

Once connected you can get notifications, manage calls and messages and do other tasks like control music playback. The Gear Manager app on the smartphone is used to customise the Gear 2 Neo’s clock face, wallpaper and what apps are installed.

You can control the music playback of your phone from the watch which is a typical smartwatch function but the Gear 2 Neo takes things one step further. Internal storage means you can transfer your favourite songs or albums and listen to music directly from it using Bluetooth headphones. This means you can go out without your companion device – perhaps for a run – and still track your movements while listening to music.

For some strange reason, Samsung put a camera into the Galaxy Gear, but for the Gear 2 Neo this has been replaced with a much more useful infrared transmitter which can be used to control your TV with the WatchON app. Fortunately, it doesn’t need to be a Samsung either.

Another key feature is a built-in heart rate monitor which can, well, measure your heart rate surprisingly.  This is appropriately place on the back on the watch where there are also metal contacts for charging the Gear 2 Neo. Combine this with the built-in pedometer which can be used in different modes (running, walking, cycling and hiking) and the Gear 2 Neo is an activity tracker as well as a smartwatch.

Some features, namely the infrared transmitter and heart rate monitor – are fiddly and don’t always work. But at least they are there if you need or want them without the hefty price tag of the Gear 2.

Battery life will vary depending on your usage but we’ve found the Gear 2 Neo can last up to a week which is pretty good. You charge the watch with a clip on module which avoids extra bulk but is easily lost or forgotten.

As we’ve mentioned, the Gear 2 Neo runs Samsung’s own HTML-based Tizen OS rather than Android. However, you wouldn’t know this just by looking at the smartwatch. The interface looks very similar to that of the Galalaxy Gear. Navigation is simple and easy to get acquainted with and the physical home button really helps.

Simple swipe gestures will get you around and if you want to check the time or a notification, you only need to twist your wrist to get the display to come on.

However, it does mean a much smaller range of apps to choose from. The app store consists mainly of clock faces and calculators which is poor.