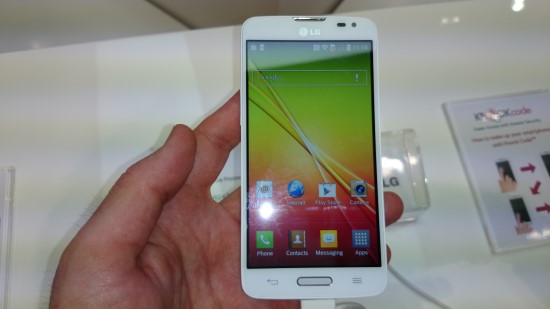 This is a great mid-ranged smartphone that is both responsive and sexy. It comes ith pretty good specs, and providing its price tag is reasonable it should definitely be a smartphone that you should consider for your pocket, if 4G isn’t a big deal to you.

There’s a saying in cricket “one brings two, and two brings three” that springs to mind with regards LG’s smartphones right now. It’s a company that is experiencing a rich vein of form in terms of the quality of its recent smartphone launches. The latest smartphone that we are seriously digging is the L90, we got to spend some time with the device at MWC 2014, here’s our LG L90 hands-on review. See also Samsung Galaxy S5 review.

The LG L90 is the top end of the three L Series smartphones on display at the MWC trade show in Barcelona. (The other devices in this family are the 3.5-inch L40 and 4.5-inch L70 smartphones.) The L90 itself is a 4.7-inch quad-core mid-range smartphone heavyweight. See also: Sony Xperia Z2 review.

The 4.7-inch screen boasts 540 x 960 pixels at 234ppi, which puts it firmly among the front runners for screen quality for mid-range devices, barring the Nexus 5 which is a boy king when it comes to its spec sheet. The real-world quality of the screen was impressive on the eye, and though it didn’t strike us as dazzling like a high-end smartphone would, it’s actually pretty decent. Take a look at the best smartphones too.

Also onboard the LG L90 is a Qualcomm Snapdragon Quad-core 1.2 GHz Cortex-A7 processor, which is married with 1GB of RAM. The result is one of the most receptive and non-laggy mid-ranged Android smartphones we’ve seen, and one that should have the competition really worried. Flicking around the home screen and opening apps was a real speedy affair.

In terms of storage there isn’t much to write home about – there is 8GB of internal space, with a microSD card slot that lets you expand to storage by up to 32GB. There are also two cameras of acceptable (but not remarkable) quality, the main rear-facing one is an 8MP camera complete with a flash. The sample pictures we took were okay, but the image got pretty distorted when we zoomed in on things that were more than 10-yards away from us. The secondary camera is a crummy 1.3MP camera that is there purely to facilitate Skype and Snapchat.

While the LG L90 will be available to buy as a Dual SIM device, is does let itself down with regards to the fact it is only a 3G device. This is not ideal during a period where 4G networks are becoming more affordable in more markets.

Where this smartphone really excels is the software that’s onboard. LG has heeded Google’s statement that all new smartphones should come with Android Kitkat 4.4. As mentioned before, the result is an incredibly nippy smartphone. An up to date OS is not all the L90 offers in terms of good software. When you initially press the power button on the L90 you are presented with the new “Knock Knock” unlock screen, which essentially means you have to unlock your smartphone by tapping specific areas of the phone. It’s a nifty little feature that take no time to get used to, and seems more secure than a passcode as there is no numerical significances to help you chose/guess a password.

LG has also equipped the L90 with a IR beam and has preloaded the device with a remote control app, so you can use the L90 to control your living room media players in the same way you can with the LG G2. The L90 has also ripped off a couple of control features from the MX Video Player app, for its own video player. You can now fast-forward and rewind but swiping left and night on the screen, as well as toggling the volume and contrast by horizontally swiping on either side of the screen.

Finally, in my opinion the device is just about the perfect size for a smartphone, measuring in at 131.6 x 66 x 9.7mm – couple this with its 4.7-inch screen and everything is nicely within reach, its smooth plastic back is pretty sexy too. Well played LG.

As yet there is no official release date and price for the LG L90, it’s not even been confirmed that it is coming to the UK. However we were told that it is more than likely that it will hit Blighty, and we should expect it to come sooner rather than later. The price is very much a mystery too, but given that the flagship LG G2 was launched at a very cheap £399, you can expect with reasonable amounts of optimism that the LG L90 won’t be too punchy. We’re guessing around the £250 mark.