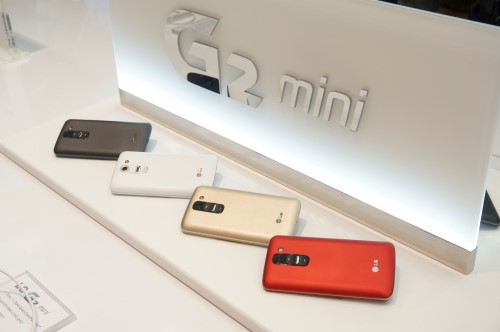 The G2 mini is almost exactly what you’d expect it to be. A smaller of the flagship G2 but the build quality and specs take a serious dive. The saving grace is a decent camera but it’s worth paying the extra for the now heavily reduced G2. If your budget won’t stretch, check out the Sony Xperia M2.

Announced at MWC, LG has launched the G2 mini a number of months after the full-size LG G2. The smartphone is cheaper, smaller and lower spec so here’s our LG G2 mini review. Read: The 31 best smartphones: The best phones you can buy

As is typical, the LG G2 mini has come along a number of months after its bigger brother. However, because the LG G3 is about to launch, the LG G2 has come down in price significantly. You can get it for £279 at the time of writing which means the G2 mini doesn’t represent a massive saving at around £220. Our review sample was provided by Clove.

As the name suggests, the G2 mini is smaller than the G2. It has a 4.7in screen compared to 5.2in meaning the device itself is more manageable in the hand. It’s a little thicker at 9.8mm but we wouldn’t describe the phone as chunky. It does feel more plastic and less premium than the G2 but that’s to be expected somewhat. It is the main downside to the phone though, because it does feel cheap.

The G2 mini looks similar in design to the G2 and retains the ‘Rear Key’ which is essentially the power and volume keys being positioned below the camera. We like the feature but it may not be to everyone’s taste.  A difference in design is that the rear cover has a textured finish and is removable, providing access to the battery which is removable and a microSD card slot. The latter being the main downfall of the G2.

As well as black and white, the G2 mini will be available in a nice red colour and also gold if you like that bling type style. Read: Sony Xperia M2 review: Mid-range Android smartphone looks good on the outside but is average under the hood.

As with most mini versions of flagship smartphones, the G2 mini has downgraded specs. That 4.7in display has a qHD resolution of 540 x 960 instead of Full HD, or even 720p. This is a real downside when you consider that the Moto G which cost less than half the amount offers an HD screen.

It’s still an IPS panel though, so viewing angles are pretty good and the display has good colour saturation. The other thing is that the screen feels far away from the glass front which you interact with.

In the UK the G2 mini will be powered by a 1.2GHz quad-core processor, but some markets will get a speedier 1.7GHz Tegra 4 chip. All models come with 1GB of RAM and 8GB of internal storage so that microSD card slot (not on the full-size G2) will come in very handy. However, LG warns that the 1.2GHz model might not handle 64GB cards so well, especially if used for video content.

Performance is perfectly good from our point of view. The phone is capable of all the usual smartphone tasks and will only slow down very occasionally or if you have too much running at once.

In benchmark tests it matched the similarly priced Sony Xperia M2 with a Geekbench 3 score of 1175, SunSpider time of 1698ms and a GFXBench T-Rex framerate of 15fps. These are reasonable but nothing to get excited about – reflecting real world performance.

We’re pleased to report that the G2 mini retains the handy IR blaster which the G2 features. It means you can use the phone as remote control for device like you TV. We can also confirm that the UK model of the G2 mini wields faster Cat 4 LTE support for 4G mobile data.

Markets with the Tegra processor inside the G2 mini will get a superior 13Mp camera. But here in the UK, we’re stuck with a lower 8Mp shooter. Nevertheless, this is one of the best pieces of hardware on the G2 mini and is capable of taking perfectly good photos and videos. Better than we were expecting, in fact.

There’s an LED flash, HRD mode and video can be recording in up to 1080p Full HD quality. See below for our test results. A 1.3Mp front facing camera offering 720p video is middle of the road for selfies and video calls.

Android 4.4 KitKat is pre-loaded on the G2 mini and although the software looks essentially identical to the G2’s, there are a couple of new features. Knock Code is the evolution of KnockON which previously allows users to switch the screen on and off with a double tap, no physical buttons needed. Knock Code means you can tap the screen is a series of specific places, even when the screen is off, making it more personalised and more secure.

Guest mode means you can hand the G2 mini to a friend of child without giving them full access to your content. You can choose what your guest will be able to access, avoiding possible embarrassment or costly phone calls to China.

WE like LG’s interface which has a useful, if busy drop down notification bar. It’s a good balance of familiar Android and additional features. However, now the LG G3 is nearly here, it does look somewhat dated and the firm hasn’t commented on whether older device will get the new look UI.

Before we get into battery life figures, it’s worth pointing out that the LG G2 mini’s battery is removable, unlike the full-size G2, because of the removable rear cover. This means it will be handy if you want to carry a spare or swap it for a replacement later on.

The combination of a 9.2Wh (2440mAh) battery and the mid-range specs resulted in decent battery life. A dual-core processor and qHD screen aren’t the most demanding of hardware. We comfortably got a couple of days use from the G2 mini on a regular basis but could also get further with light use.