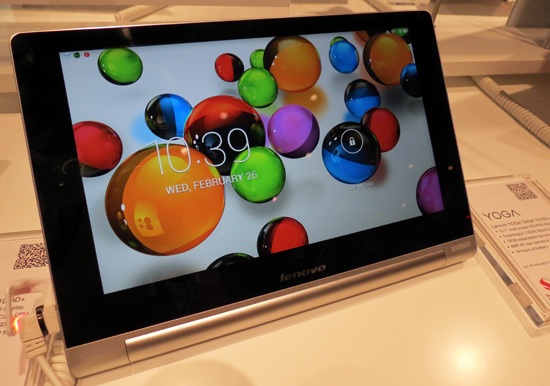 We’re certainly pleased to see that Lenovo has improved the display and processor of the Yoga Tablet 10 with the new HD+ model, without pushing up the price tag too much or putting a strain on the battery. The camera boost and design tweaks are a nice bonus, too. We’re looking forward to putting the tablet through some further testing to find out just how much faster it is, and provide our final verdict for the device.

Last year, we found Lenovo’s Yoga Tablet 10 to be reasonably impressive, but we noted in our review that it fell down when it came to the screen resolution and overall performance. The good news is that Lenovo has tackled those exact downfalls with the new Yoga Tablet 10 HD+, bringing a Full HD display and faster processor to the Android tablet, as well as a few design and spec tweaks.

When you first lay eyes on the Yoga Tablet 10 HD+, you may mistake it for its predecessor. The design remains very similar to the Yoga Tablet 10, with the same sleek chassis that sports a cylindrical protrusion at the base. See the  best tablets.

That cylinder is designed to make the tablet easier to hold, and it certainly does the trick, putting most of the weight of the tablet (which weighs 615g) in your hand to enable better balance and grip. Of course, this ‘Hold mode’, as Lenovo calls it, only really works in portrait (below), so is more ideal for reading eBooks or browsing the web than watching movies, for example.

As with the previous model, the cylinder and a portion of the back of the tablet conceals a kickstand within it, which, when extended, can be used in ‘Tilt mode’ for typing or web browsing or ‘Stand mode’ for watching movies or viewing images. The kickstand is now a little longer than in the previous version of the Yoga Tablet 10, which helps balance the device and enable even more flexibility when it comes to the viewing angle.

The ‘Stand mode’ and its better angles compliment what’s arguably the star of the show here: the Full HD display. Previously, Lenovo’s 10in Yoga tablet had a 1,280 by 800 screen resolution, which we thought was a bit of a let down and didn’t compete well with rival tablets. Now, though, the Yoga Tablet 10 HD+ has a Full HD 10.1in display at a resolution of 1,920 by 1,200, which makes it 224ppi. That’s not quite as crisp as the iPad Air, but does match the density of the new Sony Xperia Z2 tablet’s display.

Lenovo has also added ‘Smart Display’ technology to the tablet to automatically adjust the brightness of the images and text depending on ambient light.

We found thought that the display was bright, clear and accurate, and will certainly make watching movies more of a pleasure. It’s a sure improvement over the previous model and definitely a good move on Lenovo’s part.

The upgraded display will make viewing the images you capture with the Yoga Tablet 10 HD+’s 8Mp camera more satisfactory too. We tested the camera and were pleased with the crisp, well-balanced results. It’s a significant improvement over the 5Mp camera sported by the previous 10in Yoga Tablet, though the front-facing camera is still the same 1.6Mp as before.

Another welcome upgrade is the new processor: a 1.6GHz Qualcomm Snapdragon 400 quad core processor. RAM has been upgraded too, now doubled to 2GB.

We found the old model of the Yoga Tablet 10 to be a little slow at times, but our first hands-on experience with the Yoga Tablet 10 HD+ suggests that it’s a fair bit speedier and smoother to use. We’ll need to try out the tablet for a few days to really get a feel for how much of a speed boost the tablet has, but the new processor means it’s bound to be a significant improvement.

When it comes to capacity, there are 16GB and 32GB models available, both with a microSD slot to enable you to add up to 64GB more storage.

The Yoga Tablet 10 HD+ has the same 9000mAh battery as its predecessor, so we hope to be just as impressed with the battery life as we were with the older model. Lenovo still touts 18 hours of power, but we’ll need to put it through some tests to determine whether the tablet really can last that long. 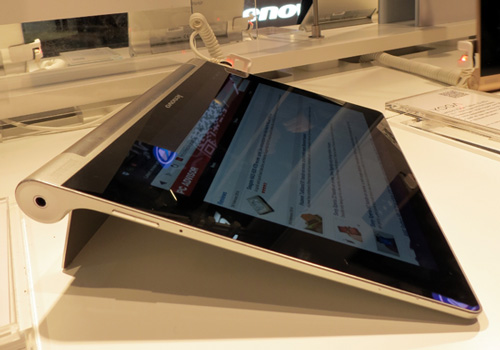 The new Yoga Tablet doesn’t come with the new Android KitKat 4.4, but instead runs Android 4.3 Jelly Bean. However, there’s talk of an update in the future that will see the newer operating system introduced to the tablet.

Lenovo has also added three ‘DOit’ apps to the tablet: SHAREit, SECUREit and SYNCit, which are together designed to make sharing, synching and protecting data more simple.

The Lenovo Yoga Tablet 10 HD+ will be available to buy in May at a price of £299 for the WiFi only model or £329 for the 3G version. That’s a little more expensive than the £249 of the previous model, but still significantly cheaper than some of its rivals.