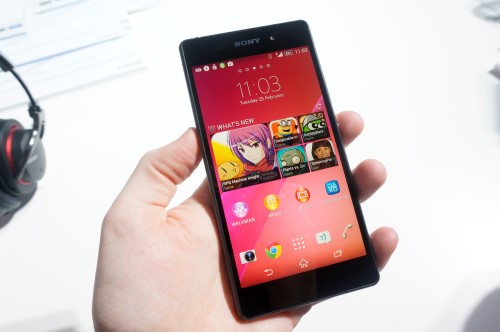 Although not much has changed from the Xperia Z1, the Xperia Z2 is another solid effort from Sony. The smartphone is a good all-rounder with a great screen, camera, build quality and performance. We just wish it wasn’t quite so bulky.

Sony has updated its flagship smartphone to a new model very quickly to the Xperia Z2. Read our Sony Xperia Z2 review to see if the Android handset can stand up to rivals like the  Samsung Galaxy S5 and HTC One M8. Read: The 24 best smartphones: The best phone you can buy in 2014.

Indeed, not only has Sony quick superceded its Z1 with this Z2, we’re now hearing rumours that an Xperia Z3 is on its way and pegged for an August/September UK launch.

Back to the Z2. Sony had sold its Vaio PC business so it’s no surprise that Xperia mobile device are what the firm is focusing on. The Xperia Z2 was announced at MWC in Barcelona back in February but it now on the shelves priced at £599. That’s Sony’s price but as usual you can get it a little cheaper. Some stock is delayed but it’s available at some retailers for £549 – a typical flagship price for 2014.

Things move quickly in the smartphone market but it’s strange to think that it was only a year ago when we were looking at the original Xperia Z. Competition is fierce at the top so Sony has really got to impress with the Xperia Z2 so read on to find out if it does or not.   See also: What’s the fastest smartphone of 2014: processor, web and graphics performance comparison

Between the Xperia Z and Xperia Z1, the smartphone took a reasonably big design change, adding a nice rounded aluminium bezel round the edge. However, changes between the Z1 and Z2 are very minimal. You really have to look for the differences because they are not obvious. The main thing is the new, almost hidden, ear piece (which contains the notification LED) and microphone at the top and bottom. There’s also an identical slot to the ear piece at the bottom where another speaker resides (see hardware for more info).

The phone is slightly larger in size compared to the Xperia Z1, but it does have larger screen at 5.2in compared to 5in. Unfortunately, the device is a little too large and the size means it’s a little unwieldy – you’ll need to use two hands a lot of the time. A shame considering the LG G2 manages to fit a 5.2in display into a much more compact chassis.

Sony has made the Z2 thinner (8.2mm from 8.5mm) and lighter though and, in a way, makes it feel smaller. On the spec sheet it’s only 7g down to 163g but somehow it feels like more.
It comes in black, white and purple options and is once again dust and waterproof. Something we’re now very accustomed to with Sony’s phones. It’s b

In keeping with previous devices, Sony offers excellent build quality with the Xperia Z2. The glass front and rear covers separated by that aluminium frame give a real premium feel and the device is robust. A minor caveat is that the device is a little bit sharp around the edge of the glass on the rear. It doesn’t sit in the hands as nicely as the Galaxy S5 or HTC One M8.

There are of course port covers to keep out dust and water (apart from the headphone socket). There’s also a drilled hole on the corner for attaching a leash and metal contacts for use with a docking station (both sold separately).

So if the design hasn’t changed much then what has changed? Some hardware has changed while some remains the same. 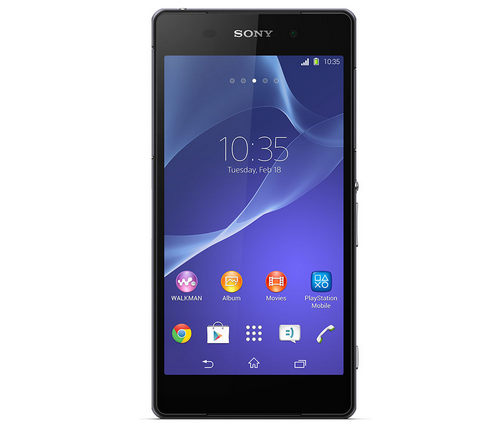 As we’ve already mentioned, the screen is a little larger at 5.2in which does mean marginally more room to do stuff, but we wish that Sony had stuck with 5in and worked on reducing the bezels to create a smaller phone than previously.

It still has a Full HD resolution, like other 2014 flagship rivals, which means the pixel density has dropped slightly but it’s not really noticeable – 423ppi is more than respectable. It still has Sony’s Triluminos and X-Reality technologies and a new one called Live Colour LED which Sony says increases colour depth and gradation.

The display may look slightly better than before – mainly viewing angles – but it’s certainly not a big jump in quality. Things have been top-notch since the original Xperia Z but it’s nice to Sony pushing things forward.

There’s also a change in processor from a Qualcomm Snapdragon 800 up to the new 801. The Xperia Z2 being the first smartphone we’ve seen with the quad-core processor which is clocked at 2.3GHz and is backed up by a whopping 3GB of RAM.

Sony says the Snapdragon 801 is 75 percent faster than the Snapdragon S4 Pro. But the Xperia Z1 has a Snapdragon 800, not an S4 Pro and from a user perspective, the difference in minimal. The GPU remains at the Adreno 330 which is no bad thing.

It’s speedy and we’ve seen no signs of major lag, although like the Galaxy S5, transition animations aren’t as quick as the iPhone 5s and HTC One M8 so it doesn’t feel quite as snappy – a minor difference. The home screen content, namely widgets, can take a little while to load in the first instance but again it’s not a big problem.

We seem to be going a bit backwards on the storage front with Sony, like HTC, only offering 16GB of internal storage with the Xperia Z2. Luckily, there is a microSD card for adding up to 64GB more storage.

The Xperia Z2 is packed with the latest wireless technology so you’ll be sorted with dual-band Wi-Fi up to 11ac, Bluetooth 4.0 with aptX, NFC and 4G LTE are all on-board. However, if you’re looking for feartures such as an infrared transmitter or wireless charging then you’ll have to look elsewhere.

We don’t normally give audio its own section but there are a few noteworthy features which the Xperia Z2 offers in this area.

For starters, it has front facing stereo speakers which is something quite rare for a smartphone. We’ve only really seen this feature on the HTC One and HTC One M8. It may not be a big deal for some users, but it does mean you can share a YouTube video or just play music at a decent volume and quality.

The Xperia Z2 also comes with digital noise-cancelling which cuts out background noise – great for travelling on trains and planes or just noisy environments. You’ll need compatible headphones (which have built-in microphones) to make use of the feature and Sony has confirmed that some retailers will ship the Z2 with MDR-NC31EM headphones. We’ll update you with the list when we have it. If you don’t get it from one of those retailers, you’ll just get basic headphones.

The camera is still the 20.7Mp whopper which is found on the Z1 with Sony’s G Lens and Exmor RS sensor. It remains the highest resolution available on an Android handset but there are some new features, too.

The camera app is packed with features can record video in up to 4k resolution which can then be played back over via the MHL 3.0 supported microUSB port. The Xperia Z2 can capture this quality at 30fps while Full HD is double at 60fps.

Alongside the Superior Auto mode which ensures general shots look good (there’s a manual mode too), there’s a Background Defocus mode to give a DSLR style depth of focus effect. It doesn’t allow you to refocus the shot like the HTC One M8 but works well in the right conditions. You get a few controls including a focus slider to edit the shot before you save it too.

It can also shoot ‘Timeshift’ slow motion at 120fps. As with other smartphones with this feature, you can edit which section of the video you want to be in slow motion. As well as Sony’s other camera apps, such as Creative effects and Sweep Panorama, you can download third-party apps.

We always like to see a dedicated camera button and as usual, Sony hasn’t let us down. You can use this side mounted key to launch the camera app when the phone is asleep, helping to avoid missing that moment. It’s also two-stage so you can get your focus sorted before taking the snap. 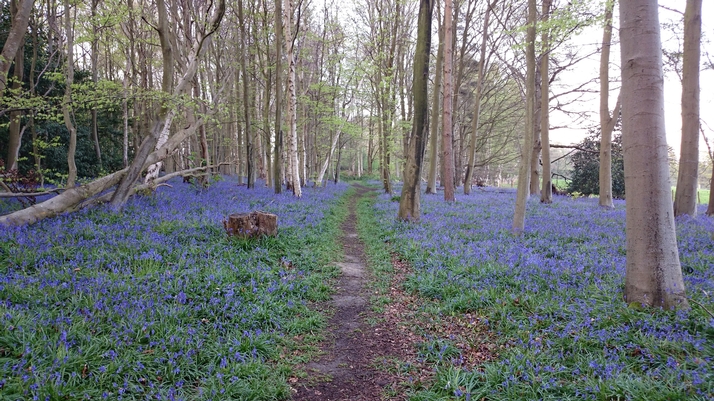 The fact the Xperia Z2 is waterproof (depths of over one meter for up to 30 minutes) means you can take some more unique underwater photos and videos – that’s pretty cool.

The front camera has been given a small boost to 2.2Mp but still records video in up to 1080p at 30fps. Like any flagship smartphone, you can expect decent quality for your selfies and video calling.

As we should be finding with new smartphones, the Xperia Z2 comes pre-loaded with Android 4.4 KitKat. It still has Sony’s user interface over the top which remains stylish but similar to previous versions. It’s much lighter and close to stock Android than HTC’s Sense and Samsung’s TouchWiz.

The main change is that the drop down bar is now split into two tabs: notifications and quick settings, matching more vanilla devices like the Nexus 5. You can easily edit which quick settings you want access to and their order.

Annoyingly, Sony has changed the cool animated blind effect on the lock screen to a fairy dust type affair and you can’t change it to anything else. It is made redundant if you use an unlock pattern, PIN, password or Face Unlock. There’s also no option to add widgets to the lock screen or launch apps – apart from the camera.

Sony’s keyboard isn’t the best around but gets better as time goes on and it learns your style. You can always switch the free Google Keyboard or pay for ones like Swipe if it’s not to your liking.

The firm also doubles up on some apps – Walkman, Album, Movies etc – but they’re genuinely good so we don’t mind that. There are quite a few pre-installed apps including Vine, Garmin Navigation, Pixlr Express and OfficeSuite. Luckily you can uninstall the ones you don’t find useful.

We’re always looking for improved battery life and although the Xperia Z2’s battery is still non-removable, it’s larger in capacity than the Xperia Z1. At 11.8Wh (3200mAh), it’s larger than most smartphone batteries and it shows.

The battery life of the Sony Xperia Z2 is one of the best around at the moment. It can easily last a couple of days with regular use and that’s without switching on Sony’s excellent Stamina Mode. Alongside a typical battery saver, this conserves the battery level even more by disabling functions like Wi-Fi and mobile data when the screen is off.

There’s no wireless charging on-board the Xperia Z2 but as we mentioned at the beginning, there are two metal contacts on the side for use with a docking station – such as the ‘Magnetic Charging Dock DK36’.