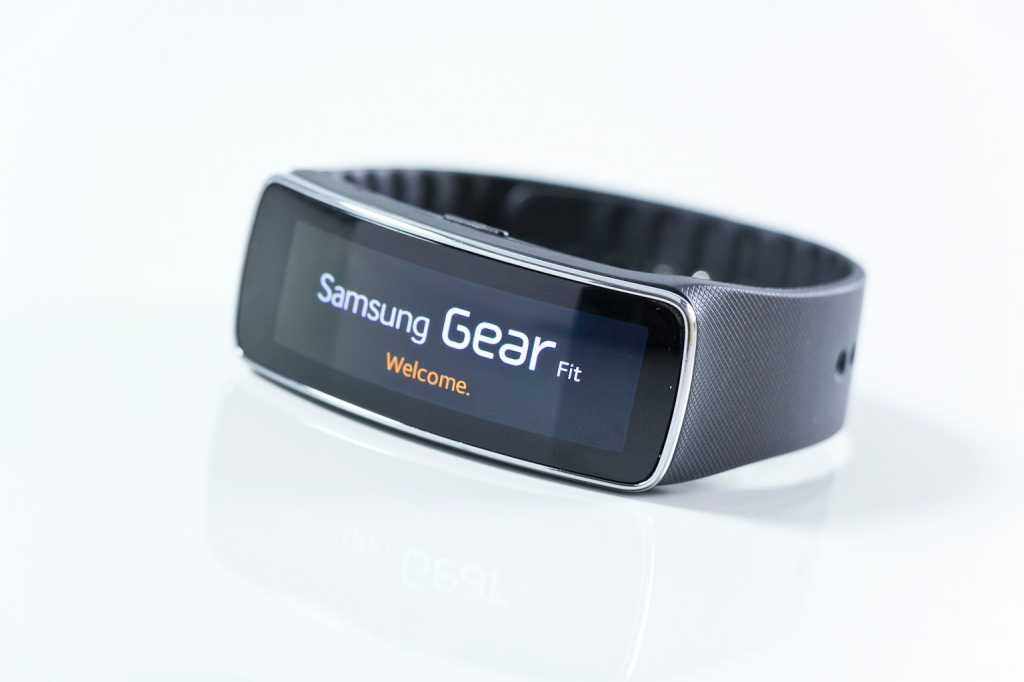 The Samsung Gear Fit is a lightweight and good looking, but has too many drawbacks, including accuracy issues and the fact that it’s only compatible with Samsung Galaxy devices. 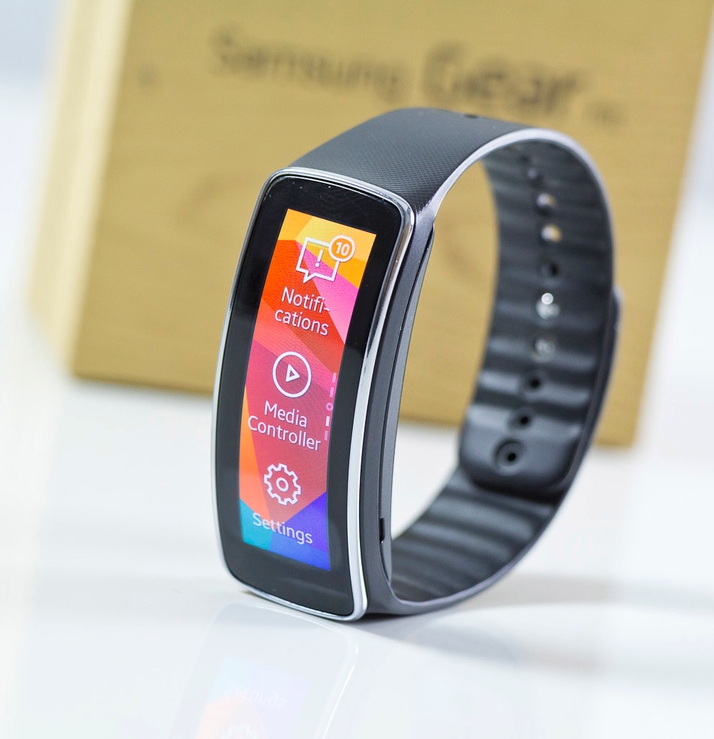 The Gear Fit is Samsung’s first attempt at a smart watch / activity tracker hybrid. It works with a selection of Samsung’s own smartphones and tablets, rather than Android in general. You can’t use it with an iPhone or iPad.

Until now, smart watches and activity trackers haven’t really crossed paths. They may look similar, but the former concerned itself mainly with notifications, while the latter monitored your daily steps and synched the data back to your smartphone. With the Gear Fit, Samsung has attempted to merge the two, and has done a pretty decent job.

It’s not a bad-looking device at all. The curved 1.85in OLED display is very bright and has the zingy colours we’ve all come to expect from OLED. Its wow factor eclipses the Nike Fuelband because it’s a ‘proper’ screen (and a touchscreen at that) and the chrome-effect bezel manages to add to the style rather than being tacky.

The rubbery strap is removable – there are four colours in addition to the standard black – and should fit any size wrist. The bands have the same type of clasp as the Fitbit Flex and Garmin Vivofit.

It’s almost exactly the same size as the Vivofit, which is to say it’s quite chunky and may not fit under tight-fitting sleeves. It’s light, though, and comfortable to wear all the time, which you can since it’s IP67 rated for water and dust resistance.

The single button can be used to turn the screen on and off, but raising your arm to look at the screen automatically turns it on as well. This can be disabled, and you may well want to as it tends to turn on with almost any movement, which is very distracting when you’re driving at night. You can also double-tap the button to jump straight to a function of your choosing, such as the pedometer.

You can wear the Gear Fit on either wrist and, thanks to a firmware update, there’s now a ‘portrait’ option which is more comfortable to read than landscape. Readability isn’t really an issue with the Fuelband or Garmin Vivofit due to the small amount of information.

Because of the way you naturally hold your arm to read a watch, the Gear Fit’s display is just about vertical, making it tricky to read email notifications unless you use the portrait setting.

Annoyingly there’s an adapter which clips onto the back of the Fit for charging via a microUSB cable. Lose the adaptor and there’s no way to charge it.

Battery life is roughly three days. That’s in line with other smartwatches, but it pales in comparison to most activity trackers which last around a week, if not two.

As an activity tracker, the Gear Fit isn’t what you’d call typical. It has a pedometer (using a gyro and accelerometer) which tracks your daily steps from midnight to midnight, estimates calories you’ve burned from exercise – not metabolic calories – and the distance you’ve covered.

You’ll need to configure your profile before you start, including age, gender, height and weight, in order for the numbers to be accurate. Unfortunately, even after doing this, we found the Gear Fit didn’t agree with our Fitbit One, which we know is pretty accurate.

It doesn’t have an altimeter for tracking height climbed, and doesn’t tell you how many minutes you were’ active’ or ‘very active’. Using the touchscreen you can set your daily step goal, and see a mini bar chart of the previous seven days’ step totals.

Instead, there’s a separate homescreen icon for Exercise. Within this are Running, Walking, Cycling and Hiking. The latter two require your smartphone or tablet to be connected as they use its GPS receiver to track your activity.

If you choose running or walking, you can set a distance, time or calorie goal. Before you set off, the built-in optical heart rate sensor measures your current heart rate, and then attempts to measure it in real-time as you run. 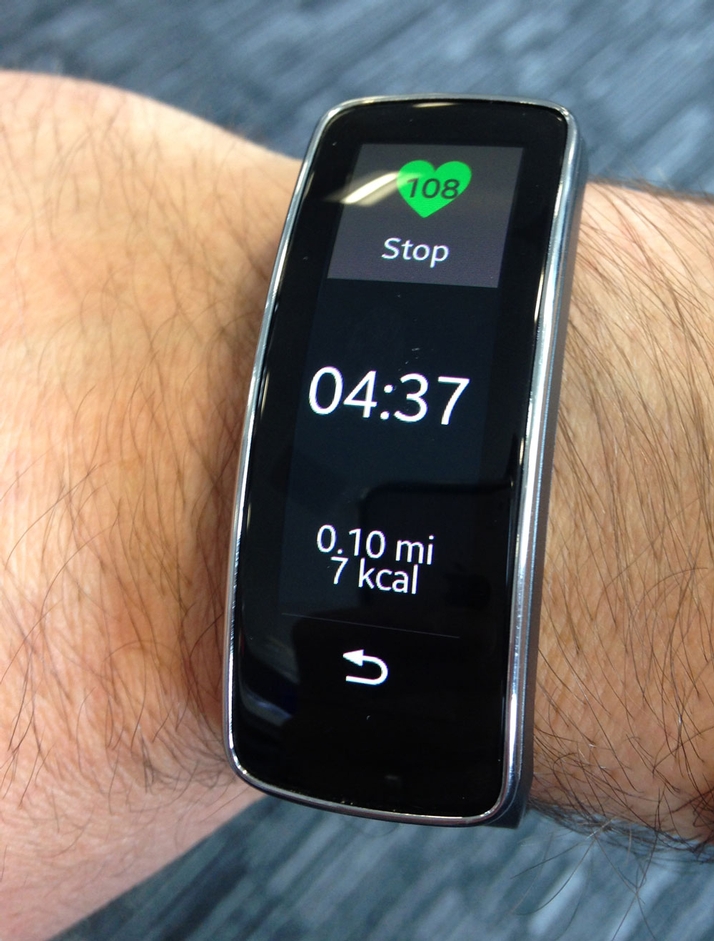 It’s similar to the Galaxy S5’s built-in sensor but you don’t need to take the band off for it to work. As long as it’s in the right place (not on your wrist bone) and you’re not moving, it works pretty well. However, all too often it would fail to produce a reading and the real-time readings weren’t necessarily in sync, so we didn’t exactly trust it.

As well as heart rate, the Exercise display shows a timer along with your current distance and calories burned, and the data is saved when you hit Stop (there’s no pause button, unfortunately). There’s the same History function as with the pedometer, letting you see your exercise over the last week.

There’s a separate home screen icon for Heart Rate, where you can take measurements on demand. Although there’s a History icon, you can see only the last measurement.

Scroll up the home screen (or to the right if using it horizontally) and you get another three icons: Stopwatch, Timer (countdown) and Sleep. With Sleep, you have to tap the Start button when you go to bed, then stop when you wake up. A summary screen tells you the duration, and the percentage of time you were motionless.

Thankfully you can enable a Blocking mode which prevents the Fit from bothering you with notifications. You can’t set an alarm on the device itself, but you can enable notifications from the companion app Gear Fit Manager. Usefully there’s a vibration motor which can wake you up as well as making you aware of notifications.

As a smart watch, the Gear Fit is a little lacking. It will display notifications from your phone or tablet, allow you to control media playback (and volume) on the connected device and find that device by activating an alarm.

Notifications can include basic functions such as SMS, emails, calendar appointments and incoming phone calls. You can also opt to get weather alerts and notifications from any other apps installed on your phone, just as you would on your smartphone’s homescreen.

You can dismiss a notification by swiping the red X across the screen, or snooze (when applicable) by swiping the yellow ZZ icon. You can accept or reject phone calls, but the Gear Fit isn’t a hands-free kit: you still have to take the call on your smartphone. If you reject the call, you can set up the Gear Fit Manager app to send a pre-defined message such as “I’m busy, I’ll call you later”. 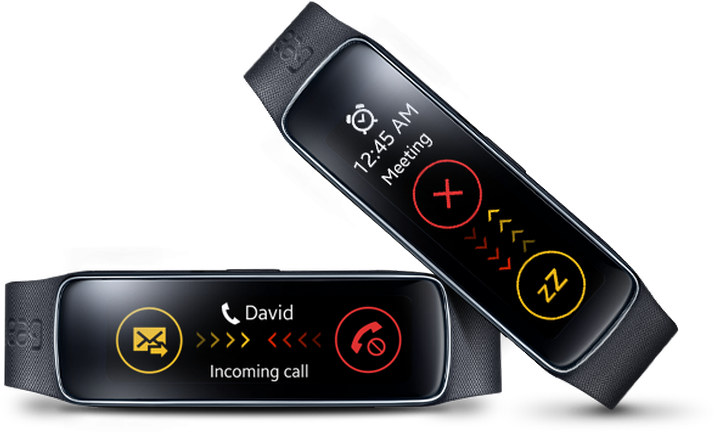 It’s also possible to reply to text messages, but again only from a set of pre-defined templates.

Email notifications can be messy. You can enable message previews so you can read the body of the email, but if several messages arrive at once their subject lines merge together so it’s hard to tell where one ends and another begins. Reading this in portrait mode isn’t pretty either, as the screen’s 432×128 pixels provide enough width for only 8-10 characters.

Unlike the Gear 2 smart watch, the Fit uses a proprietary operating system so you can’t install apps.

You will need to install the Samsung Gear Fit Manager app and set up a Samsung account on your smartphone or tablet to use the Gear Fit. It also replicates the settings, so you don’t have to make them on the sometimes fiddly small screen.

There are extra settings such as ‘style clocks’ and the ability to create wallpaper (horizontal only) from your own photos. You can set up templates to replying to text messages and even the triple-tap emergency function which can send a pre-defined message to several contacts if you ever get into trouble. 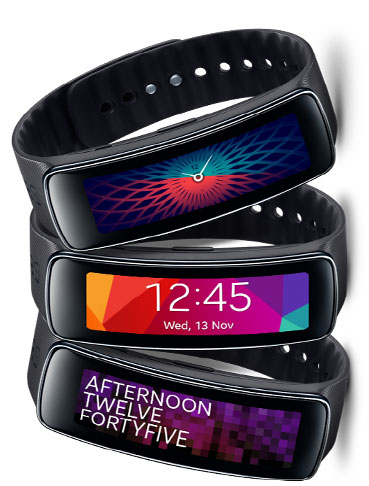 Confusingly, there’s a separate app – Fitness with Gear – for activity tracking. This sucks in the data from your Samsung account and is essentially a web app. It feels very much like a work in progress, as despite setting a profile on the Gear Fit, the app displayed the defaults. 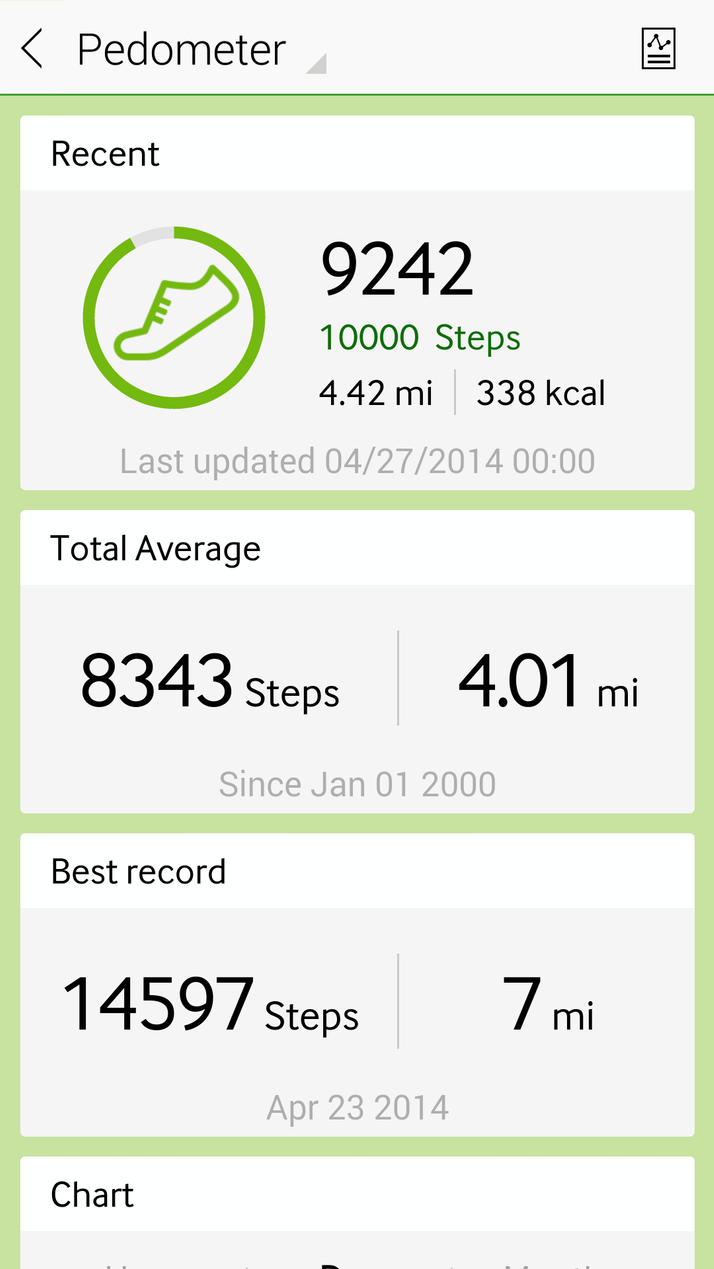 There’s no way to track food and drink intake, nor track your weight. You can see your position in the leaderboard against all users, but you can’t see a personalised chart showing only your friends.

Initially, the Gear Fit impressed us but as time wore on, we were less and less inclined to forgive its foibles. Charging every three days is a bit of a hassle and even more so when you have to keep tabs on the small adaptor.

The inaccurate pedometer might be ok if you like artificially high step counts, but not if you value accuracy.

Samsung has sensibly added a portrait view, but this doesn’t entirely solve the readability problem as it isn’t really wide enough. There’s still work to be done on ensuring every function displays correctly in this mode.

Smart watch functions are a bit thin on the ground and we hope there’s more to come on this front via a future firmware update.

Of course, the other main problem is that this is an entirely closed system. You need to own one of 17 Samsung devices to even use the Gear Fit and there’s no exporting your data to another platform, nor any third-party app support for things such as food, drink and weight tracking.

The hardware shows a lot of promise, but until Samsung can improve the band’s overall accuracy, we can’t recommend it.