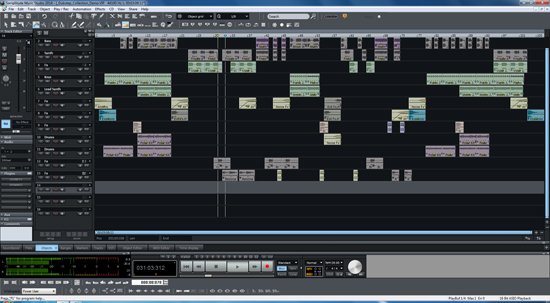 There’s no doubt MAGIX Samplitude Music Studio 2104 is a flexible and very well-featured music production suite. The new features are not window dressing and improve the overall functionality of the software. The suite is not that easy to get into, though, and feels in some parts as if the interface suffers from the repeated addition of extra features, without proper integration.

MAGIX is probably best known in the UK for its consumer-based Music Maker software, a loop and sample-based editor, but at the semi-pro level, it has Samplitude Music Studio 2014.

This is a music production suite, handling recording, manipulation of samples and creation of finished media.

This isn’t an ideal application to come to cold, without having used similar software. It has a complex set of controls, not always in the most obvious places. For example, although you have full transport control – start, stop, pause, wind – of the current project from the main editing screen, overall volume adjustment is only available from the suite’s mixer, which has to be called up separately.

The editor supports samples, direct recording and MIDI tracks and these can be freely mixed in the arranger view, which is similar to the timeline view in a video editor. You can directly edit clips using the handles overlaid on them, adjusting fade in and out and clip volume without moving to the track editor.

As an alternative, you can run through the 128-track mixer, which simulates its physical equivalent, right down to the bit of masking tape detailing the instruments on each channel.

We thought 64 tracks in the previous version of Samplitude Music Studio was excessive, so it’s very hard to see how you could effectively use over 100. They can’t all be seen on screen at once and have to be viewed in banks.

The new features in the 2014 package are wide ranging, from a new synthesizer, to a vocal tuner, to automatic mastering of the finished recording. There are also four new banks of sampled instruments: power guitar, vintage organ, pop brass and electric piano.

The suite now also supports touchscreens, so if you’re running Windows 8, you can tap and slide. With the size of some of the on-screen controls, though, you will need a stylus. See all audio hardware reviews.

The vocal tuner, which can also be used for solo acoustic instruments like violins or cellos, adjusts notes or passages to improve pitch accuracy. The audio track is analysed and you’re presented with a grid of blocks representing the notes. Dragging these up and down, singly or together, adjusts the pitch, while maintaining the overall sound envelope. The naturalness slider varies the sound from ‘as performed’ to a sort of pseudo-Cher.

The DN-e1 synthesiser has 256 presets, a phenomenal number, ranging from Crusty, to Plastic, to Trippy – yes, some of the voice names are none too descriptive. They are, however, a treasure trove of sounds to work into a wide variety of music types.

Final mastering of a track or a complete album can be a complicated process, with a lot of parameters to balance against each other. MAGIX now offers a preset approach to this too, applying a series of equalisation, stereo enhancement, compression and other techniques to the overall sound of your recordings.

You can choose one of the supplied presets or set the parameters individually. Once set, a new preset can be created and applied to other recordings.

MAGIX also makes video editing software and, as you might expect, tracks laid down within Samplitude Music Studio 2014 are fully compatible with the soundtrack format of applications like Movie Edit Pro.