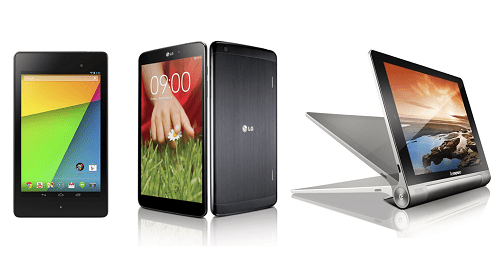 Despite being the oldest tablet here, the Nexus 7 remains our top-pick. It’s the best all-rounder but the other two contenders are still worth a shout. The G Pad feels the best and has some extra software features which are really handy. Lenovo’s Yoga Tablet 8 is cheap, good looking and has a great design – just be prepared for lower grade hardware and performance if you opt for this one.

Here are three similarly sized and priced tablets, which are all very different. Choosing a tablet can be difficult so we’ve compared these three in detail to help you decide which the best one for you is.

The Nexus 7 is available at a more than reasonable £199 and although the LG G Pad 8.3 started at a price above £200, you can buy it for the same price as the Nexus 7. That’s not bad going from LG and makes both these tablets very affordable.

When we reviewed the Lenovo Yoga Tablet 8 last year, it was also £199 but at the time of writing you can get this device for around £160. That makes it the cheapest of the three but that doesn’t automatically make is the best buy.

Winner: Lenovo Yoga Tablet 8 (but it’s not as simple as that so carry on reading).

At 7in, the Nexus 7 is the smallest and most portable tablet of the three. It’s small enough to fit in some pockets. However, it doesn’t have the most stylish design on offer. Don’t get us wrong, the Nexus 7 is lovely piece of kit but you may fall for the aluminium look of the G Pad and Yoga Tablet 8.

LG’s G Pad, at 8in, is a bit bigger than the Nexus but is still perfectly usable with one hand. The brushed aluminium rear cover gives it a premium feel and there’s also a white model if you like that kind of thing.

Meanwhile, the Yoga Tablet 8 has the most radical and alternative design. It’s a wedge shape which not only looks great but means you hold most of the weight in your hand. It also has a partially aluminium body and a built-in kick stand which allows you to place the device freestanding in different modes.

Winner: There’s really no clear winner in this area so it’s down to you to decide which one fits your usage best. The Nexus 7 is the most portable, G Pad the most premium and the Yoga the most versatile.

We’re not going to bore you with a massive list of specs here. You can easily find those in our reviews of each tablet. Instead, we’re going to simple explain how the tablets perform and what you’re going to get for your money in terms of hardware and performance.

Both the Nexus 7 and G Pad use IPS display panels with a Full HD resolution. They’re both great but if we’re going to pick hairs the Nexus is marginally better since the screen is smaller meaning the pixels are packed in tighter. The Yoga Tablet 8 is lagging behind with a lower resolution, but it does have good viewing angles.

The Nexus 7 is readily available in both 16- and 32GB models but has no microSD card slot for adding more. Unless you’re lucky, you’re only going to find 16GB versions of the other two tablets which both have expandable storage meaning you can add up to 64GB more.

Clock speeds and number of cores can indicate performance, but don’t just go on numbers. The bottom line here is that the Nexus 7 offers the smoothest performance despite the LG having a newer chip. The G Pad does run well but has a frustratingly laggy homescreen.

The Yoga Tablet 8 is again lagging behind its rivals here exhibiting lag with more demanding tasks like web browsing and multi-tasking.

It’s worth pointing out that each of these tablets comes with unique features which you won’t find on the other two. They may or not be crucial to your decision so here they are just in case.

The Nexus 7 has wireless charging which is a rare feature and is also has a 3G/4G LTE model for mobile date, although this is only available on the 32GB model.

Lenovo also offers a 3G (not 4G) version of the Yoga Tablet 8 but you might have difficulty finding it in the shop. It also had front facing stereo speakers which are particularly handy when used with the tablet’s kick-stand.

Meanwhile, the LG G Pad 8.3 has an infrared transmitter which means you can use it as a smart remote controller. It can be used to control devices in your home like your TV, Hi-Fi and Blu-ray player.

Winner: Whichever has the most important features to you.

All these tablets have a 5Mp rear camera and although we avoid taking photos with tablets like the plague, the G Pad 8.3 is the best here if you insist on doing that kind of thing. Its HDR is the main benefactor here and there are some others, too. Meanwhile, the Nexus 7 and Yoga Tablet take reasonable shots, but only if conditions are good.

The front camera on a tablet is far more useful from our point of view, for those video chats with family and the like. It’s a fairly level playing field but the Yoga Tablet 8 gets our vote considering the kick-stand means hands-free video calls, although the webcam is strangely positioned at the side. The Nexus 7 and G Pad 8.3 both have reasonable webcams, but nothing special.

Being a Google device, the Nexus 7 is the most up-to-date when it comes to software with Android 4.4 KitKat. Meanwhile, the G Pad 8.3 and Yoga Tablet 8 are stuck on 4.2 Jelly Bean and we don’t know when updates will arrive.

An advantage of the Nexus 7 is that is comes with the purest user interface, also known as vanilla Android. This means it’s clean and simple but has the flexibility to customise. You’ll also be kept up to date with new software versions much faster.

Although the G Pad and Yoga Tablet 8 a behind, they add software features and user interface skins on top of Android. While these might look nice (LG’s is superior to Lenovo’s in our opinion) they can be confusing and have a negative effect on performance.

If you’re not going to opt for the Nexus 7, then the G Pad is the best alternative since it has some really handy software features and apps. Lenovo doesn’t add much value with its system.

Our favourite G Pad features are QPair which allows you get manage messages from your smartphone on the tablet and KnockOn which means the device can be turned on and off by double tapping the screen. For information on the others, read our full review.

Charging devices all the time is a pain, and a cost, so good battery life is no doubt something you’re looking for in a tablet. The good news is that all of these three offer decent performance in this area but there are some differences.

In our battery test which involves seeing how long each tablet will last on a full charge while looping an HD video, the G Pad came in last at eight and a half hours playback. That’s still respectable though and only a matter of minutes behind the Nexus 7.

However, the Yoga Tablet 8 outpaces both with a whopping 12 hours of video playback which is one of the best results we’ve ever seen.