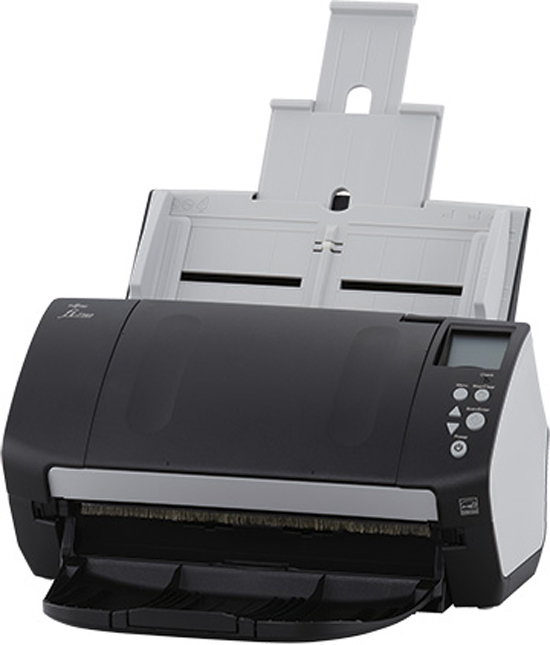 The price tag demands that you think carefully before buying this model, but its performance and features are right at the top edge. If your company have a need for mass-production of important files at sensational speeds, this is an amazing performer.

The fi-7180 may come with a high £1260 price tag, but for large and medium businesses, this powerful super-fast sheet-fed scanner can quickly justify its expense through its ability to simply process and convert large volumes of documents into an electronic format.

Its sophistication is obvious from the moment you get it out of the box. With more heft to it than, for example, the Epson DS-510, it’s not the most lightweight of models. Neither is it the simplest to operate, with a more comprehensive set of buttons, and an in-depth menu that allows you to tweak and control many aspects of the scanner without touching a computer.

The Fujitsu fi-7180 is incredibly versatile. It can automatically feed in up to 80 sheets at once, and it’s even possible to use long-document support to cover source material that’s up to 5588 mm long.

Many sheetfeds struggle with items that aren’t wafer-thin, but the fi-7180 can work with materials up to 1.4mm thick. That allows it to scan embossed business cards, for instance, although it can only handle three of these at a time.

It’s directly connected to a PC through its USB 3.0 port, with no option for wired or wireless network facilities. Managers can quickly tweak the settings and workflow of the fi-7180 using Fujitsu’s professional Scanner Central Admin suite.

One of the concerns with any sheet-fed scanner is its ability to cope with potential paper blockages. If the scanner doesn’t feed properly, the resulting paper jam can often result in the destruction of the source material. If you’re working with important documents then that’s an unacceptable prospect.

The fi-7180 tackles this with iSOP (Intelligent Sonic Paper Protection), a sophisticated feeding device that listens to the sound and quickly calls a halt when it detects changes in the feed. For example, if two sheets are sucked in at once, the fi-7180 can tell this from the difference in the sound of the feeding. Add to that the highly-effective paper straightener, and we found it very hard to catch out the fi-7180. It can even detect sticky notes on pages.

For those who still aren’t convinced, the 7180’s bigger brother, the 7280, might be the answer. This costs an extra £500 or so, but comes with an extra CCD sensor, and an additional flatbed component that can be fitted to the main unit. This means that precious documents can be scanned using the flatbed, but you still have a lightning-fast sheet-fed for more routine workloads.

That 80/160ipm speed sounds too good to be true, but the fi-7180 really is blisteringly fast. When in use, you need to be careful to pull out all three sections of the fold-out output tray, as the paper can come out almost too quickly and ensnare itself, unless it has the full length of the tray to catch it. The performance is stunning, though, and it took us just eight seconds to scan 20 pages – and a further two seconds for those to be in the software and ready to use. This adds up to 150 pages a minute, and really is an astonishing achievement – it would be faster still if working with large bundles of documents. Very little tinkering needs to be performed, with the PaperStream IP driver swiftly enhancing and tweaking the images on the fly. Colours were immaculately produced, and lines smoothly rendered.