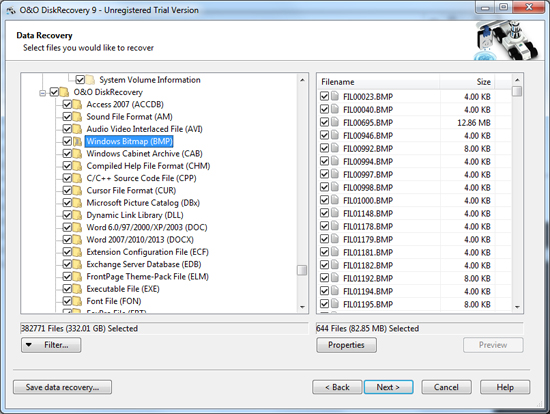 O&O DiskRecovery 9 Professional does what it says it will. For the three main types of data recovery: from file deletion, partition removal and disk reformatting, it will resurrect the majority of files, via it’s very easy-to-use, wizard-driven interface. The only query is whether the occasional use most people will give a program of this type is worth the £65 asking price.

A recovery tool is one of those ‘vital when you need it’ utilities, which can save a lot of time, frustration and money. O&O DiskRecovery 9 Professional is designed to recover inadvertently deleted files and folders in Windows, reconstitute a disk partition or even resurrect a reformatted hard drive – as long as it hasn’t been securely wiped. See all software reviews.

The process of recovering data is very straightforward, as the program runs as a wizard, asking step-by-step questions, before performing analysis of files from the selected drive.

Once you’ve selected a logical drive to look at, the software runs an automatic three-part scan, looking for deleted data.

We examined a 60 GB partition on a test Windows PC and the software found 391,954 files in 61,120 folders. It took 35 minutes to do this, although of course speed will depend on the number of files the scan locates on a particular drive, and the speed of your drive.

Once discovered, O&O DiskRecovery 9 Professional offers a list of all the files it has found. By definition, a deleted file won’t have an entry in the Master File Table (MFT), but the data, including its filename, is usually still intact on the drive, so the software can recover the file type from the file name, or by looking at the file’s structure.

It’s quite good at doing this and O&O says it is adding new file types to the list it can recognise all the time.

Once the analysis is finished, the software shows a tree of discovered files, broken down into Unerase, FormatRecovery and DiskRecovery sections.

These three different ways of recovering data can mean you have a lot more available data than the size of the partition or disk being examined – we saw over 680 GB of recognised data from our 60 GB test partition, so it makes sense to browse through the sub-folders and recover only the data you actually need.

Under NTFS, it’s fairly easy to spot a particular file you want to recover. This is less easy in a FAT32 volume, where the first character in the file name is replaced with a special character to indicate deletion. Recovered files from FAT32 volumes may, therefore be in an odd alphabetical order; you’ll need to browse by the second letter in the filename.

There are ample warnings not to install and run O&O DiskRecovery 9 Professional from the drive you want to recover from, but you can also install an ‘instant’ version of the application to a USB drive or similar and run the software ‘off platform’, recovering perhaps to an external drive.

If you’re thinking you might be able to use this application to recover data from a drive wiped securely with a military-grade disk eraser, such as east-tec Eraser 2014, you’re out of luck.

On modern drives, where data is very accurately located on the platters, even a single-pass erase will destroy any pre-existing data, so that even a specialist lab will fail to retrieve it.

The Professional version of O&O DiskRecovery 9 under review is licensed for a single computer, but an Administrator licence for all the PCs on a site is available for £250, while an Engineer’s version, for use on multiple sites, costs £629.