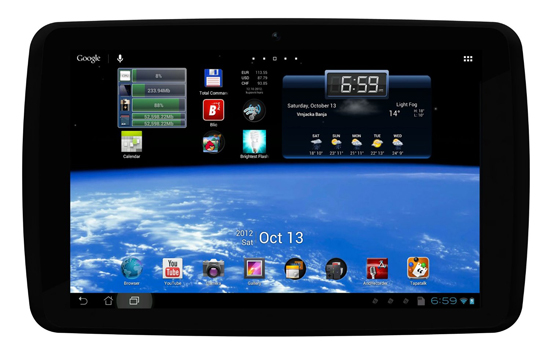 An adequate tablet for basic tasks, but the poor speakers, cameras, spotty performance and low-res screen make it feel far from a bargain.

The Playtab is a widescreen, large-format  tablet along the lines of the Nexus 10. Its plastic casing is sturdy, exhibiting little flex, while looking quite smart in the process. In landscape mode each side of the chassis is slightly raised, which makes the unit comfortable to hold in spite of its reasonably hefty 620g weight. Take a look at Best Android tablets

The right edge houses various connections such as a microUSB, miniHDMI, microSD, and the proprietary charging socket. The latter is disappointing especially when so many Android tablets now use the universal microUSB charging port. The left edge incorporates a 2W speaker, which sounds barely audible, even at full blast. Take a look at Best budget tablets.

The 10.1” IPS display is bright and spacious, but has a low 1280×800 resolution, which gives it a pixel density of 149ppi. This means text and icons look blocky and jagged. Video is decent though, making good use of the wide screen, and web pages render reasonably well, with images appearing sharp and colourful. For many people the display will be perfectly adequate, but if you’ve grown used to a HD or Retina display the lower quality will be immediately apparent.

Under the hood there’s a 1.5GHz quad-core A9 CPU, supported by 2GB of RAM. This is a good spec for a lower cost tablet and should deliver enough power for web use, social media activities, and less demanding games. It’s somewhat of a surprise then that the Playtab had a tendency to stutter occasionally. Downloading updates to apps in the background reduced the operating speed to almost zero, while games like Temple Run had a noticeable hesitancy in executing movements. A lot of the time it’s fine, but the performance dips were frequent enough to annoy.

Android 4.2.2 is the OS of choice for the Playtab, and it remains mostly unmolested. The only real obvious deviations from the norm were two additional software buttons for volume control, which is actually a very useful feature. Google Now is present, as is full access to the Google Play store for all your app needs.

The Playtab does contain front and rear cameras but they are utterly useless, with the focus being slow, inaccurate, and producing images of such low quality that it’s not worth the effort. At least battery life is decent, lasting well over eight hours in our looped video test.