Skip to content
Home / Reviews / Game Reviews
At a Glance

Ocotodad is an instant star, but despite a strong start this cheerfully chaotic game doesn’t quite wind up being the best vehicle for him.

Octodad sounds like a superhero, but is anything but. Our poor, tentacle-armed star is an octopus who’s somehow got away with dressing in a suit and fooling all and sundry into thinking he’s a man – even to the point that he’s got married and had kids. It is best not to let the mind think too deeply upon that latter fact.

The challenge in this puzzle-adventure game is to complete a series of everyday tasks without anyone rumbling that you are, in fact, a cephalopod. They don’t seem to notice the bright orange face, but too much accidental destruction means they’ll realise something is very, very wrong. Trouble is, Octodad has no bones in his rubbery ‘limbs’.

His tentacle-arms and tentacle-legs flail uncontrollably no matter how finely you try to control them, so an act as simple as making a cup of coffee or crossing a room to open a cupboard becomes a nightmarishly destructive act of strain and terror.

Essentially, it’s a battle against the controls – a single button press switches between ‘arms’ and ‘legs’, which must be maneuvered into protesting position like the world’s worst shopping trolley, and which will spasm wildly at the slightest movement. You want the tentacles to co-operate, and Octodad’s blankly panicked expression suggests he wants the tentacles to co-operate, but the tentacles absolutly will not co-operate. As a result, there’s an incredible amount of triumph when you achieve something as basic as opening a door.

It’s both hilarious and tragic. Unexpected consequences and witty dialogue abounds, and while the essential gag of trashing everything accidentally only has so much mileage,  you can really feel poor Octodad’s great sadness as he fails to pour milk on his kids’ cereal or destroys an entire bedroom in an attempt to turn off the alarm clock. It’s even worse when those who love him grow suspicious.  Poor Octodad. All he wants is a nice human family. 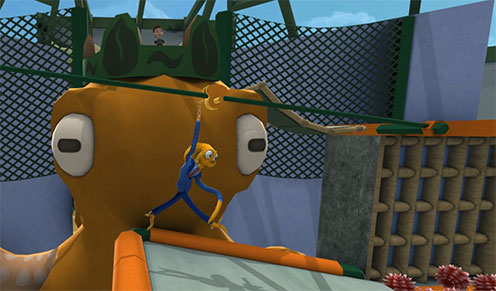 The game is aware that the central premise – octopus in a suit trying to achieve everyday suburban tasks – only has so much mileage, and rather than run it into the ground there’s a late-game switch to something else. Something a bit more conventionally game-y, but with controls that fight back. Something with stealth and boss fights and a sort of platforming. Something where the slightest mistake means game over, but where the tenatacular chaos means the slightest mistake is a regular and inevitable occurrence.

All credit to the game for not resting on its spasming laurels, but it’s a shame it escalates from comic incompetence to teeth-grinding frustration, with the sort of failure rate that can make it feel like torture.

The level of visual and narrative invention, as Octodad finds himself drawn into a darker, stranger world, is reliably impressive, but seeing it all involves too many headaches.

More reliable merriment awaits in the co-op mode, which sees one player controlling the ‘arms’ and another the ‘legs’, which means twice the chaos and twice the hilarity, at least for a time. It’s wonderful thing to break out at a party, and feels like a more appropriate form of escalation than the action-adventure segment of the main game is.

Octodad winds up as there was always some fear it might -a wonderful idea and a great opening act stretched too far, and like its goggle-eyed star, it winds up trying to wear a suit that doesn’t quite fit.