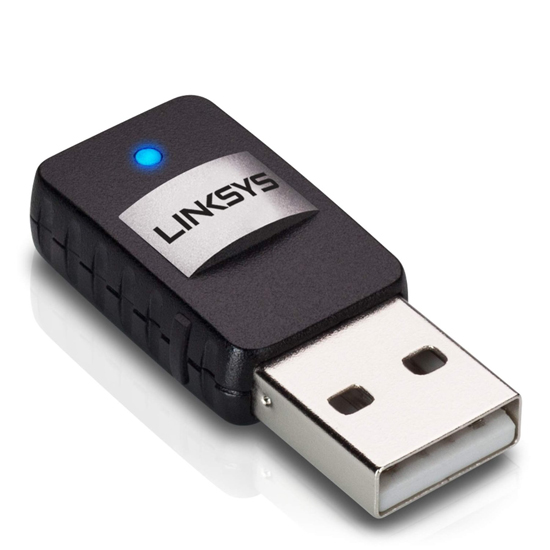 The poor performance at range makes it hard to recommend this adaptor to someone with a laptop already containing a decent 802.11n Wi-Fi card. With rivals producing much higher performance at range you would have to be really set on the Linksys AC 580’s small size to make the trade-off worthwhile.

The headline feature of 802.11ac networking is its ‘gigabit wireless’ capability. This is not the same as 1 Gb/s of real throughput though, even on  laptops employing up to three antennae. This compact Linksys and many other USB 802.11ac adaptors only have a single antenna, which reduces even their theoretical sync speed to a maximum of 433 Mb/s.

The good news is that this device still has the potential to unleash decent Wi-Fi performance thanks to revised technologies in the 11ac specification, such as beam forming and higher-density modulation schemes than found in 11n.

The beam-forming technology allows the the router to detect the approximate location of the wireless client, typically a laptop, and boost the signal in that direction. High-density modulation such as 256-QAM in 11ac allows the data transmission of the signal back and forth to be adapted to provide a greater throughput.

And if you want a compact solution the Linksys AC 580 is about as compact as you’ll find. The total length of the adaptor is 35 mm, with just 23 mm protruding when fitted in place. It still includes a tiny WPS button for Wi-Fi Protected Setup configuration. The small space provided for an antenna does not bode well for the signal strength. Also troubling is the the unit’s USB 2.0 specification, where USB 3.0 would be advantageous for best performance.

This unit was tested for both the maximum potential throughput at short range, and its performance at extended open-air range.

Maximum throughput from the Linksys was 201 Mb/s, slightly higher than the 184 Mb/s achieved by our test laptop’s built-in 802.11n card with three antennae.

In the second test the AC 580 returned a speed of 50 Mb/s compared to the 67 Mb/s using 11n. This result is a long way behind all the other 11ac wireless adaptors we have tested from Asus, D-Link and Netgear. Under identical conditions other 11ac USB dongles could all reach speeds of 125 Mb/s to 201 Mb/s.

In the extended open-air range test the AC 580 achieved only 2 Mb/s and the connection proved unstable. By comparison the other 802.11ac USB units tested ranged between 120 Mb/s and 142 Mb/s. And the laptop’s built-in 11n card using 5 GHz returned 86 Mb/s.

At close range the performance was on par and in some cases better than its competitors. But it would appear from our testing that the small size of the Linksys AC 580 with its single antenna was hampering performance at range, which is where 802.11ac devices should really shine compared to previous Wi-Fi standards.