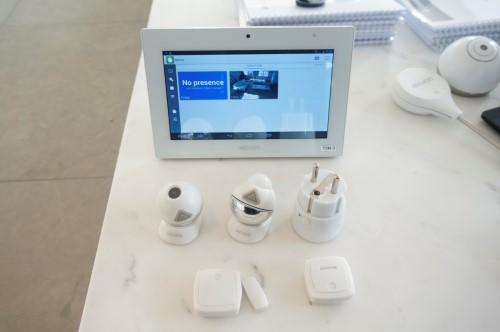 We’re excited about the potential the Archos Smart Home kit has, offering functionality at an affordable price. Check back for a full review soon.

Want to monitor and control your home without spending thousands of pounds? Read our Archos Smart Home hands-on review.

It’s difficult and expensive to get lights to come on when you come into room or keep an eye on the driveway without going out side?

Well Archos aims to make this easy with a kit of smart gadgets to place around your home. The objects, as the firm calls them, are small, discrete and easy to setup. Simply stick the base to the wall or ceiling, then attach the device. They use magnets so are easy to, attach, adjust and manage.

The Smart Home comprises of a Mini-cam, Motion Ball, Weather Tag, Movement Tag, Siren and Smart Plug – what they do is pretty self-explanatory and many are suitable for outdoor use. All the objects connect to the tablet using Bluetooth Low Energy. Archos says the batteries will last for up to two years.

There’s also a 7in Smart Home Tablet with which to control the system. It’s an Android tablet so can be used for the other things you’d usually use a tablet for – gaming, web browsing, social networking etc. It’s designed to sit on a coffee table or a shelf though, not really handheld.

Initially Archos will sell a starter kit for around £150 consisting of the Smart Home Tablet, a Mini-cam and a Motion Ball. Then you’ll be able to buy individual objects to expand the system from Archos or packs containing multiple devices – the packs and prices are still to be decided.

The Smart Tablet will be an optional part of the system since you can hook any of the objects up to your existing  smartphone or tablet via Bluetooth. However, the device is really integral to the system working to its full potential.

Archos has recoded the Bluetooth on the device so that you can pair up to 30 devices using the Low Energy standard – most devices will only accept up to three. It’s also the piece of kit which will broadcast information to you while you’re out of the house – if you just used a smartphone then you’d lose the Bluetooth connection shortly after leaving the house. It also has built-in temperature and humidity sensors.

Whether you use the Smart Home Tablet or your own devices with the Smart Home app (compatible with Android and iOS), you can setup rooms and scenarios to make the system work for you.

With multiple objects working together the possibilities are extremely broad. You first set something to detect, maybe a door opening or a certain temperature, then you set an action to take, possible taking a photo with the camera or sending an alert to your phone. You can also set schedules or certain times when these things can happen.

Some examples of situations are that the weather tag will wake you up early if the temperature and humidity are such that you’ll need to de-ice the car. Or you could get your lights plugged into Smart Plugs to switch on when you come into a room.

As well as making things happen or notifying you about something, the system records information. This means you can monitor the temperature of rooms in your house and also the amount of electricity used by things plugged into any Smart Plugs, so there are also economic benefits, too.

Archos says that it isn’t taking on automation but there are elements of automation here with the inclusion of the Smart Plug.

We love the fact there’s all sorts of things you can do with this system, making it work for different lifestyles. Then there’s the fact it’s cheap, easy to setup, expand and then manage. The only real downside we’ve encountered so far is that the software is a little temperamental but we hope the bugs are ironed out come launch time.