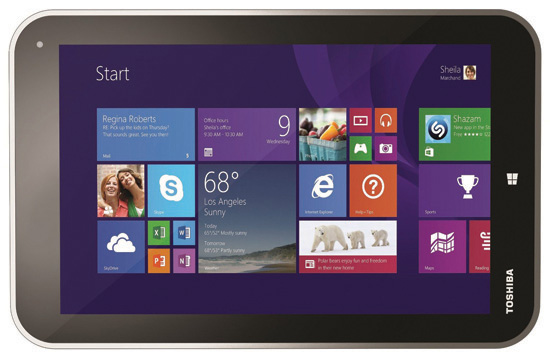 Just £250 for a portable PC that can run Windows may seem like an attractive idea, but our experience did not back up that proposition. Toshiba has used a cheap and slow processor to hit both price point and thermal design constraints, making a tablet that lurches rather than zips under your control. Battery life is usable if unremarkable. The familiar Windows interface is clearly not designed to work on this size screen through touch control, leaving you with just a moribund Metro interface.

Toshiba is pitching into the emerging small-tablet market with the Toshiba Encore 7-inch tablet. As a dutiful Microsoft partner Toshiba has built this mini slate to run Windows 8 and help promote Microsoft Skype. In fact the Encore was one of the first PCs to ship with the revised Windows 8.1 OS pre-installed, although like other former Windows stalwarts the Japanese company is also now turning to the cheaper Android option for its tablets. See also Best Tablets.

At 432g the Encore doesn’t feel especially heavy and is relatively wieldy in its 14cm width, although we’d point out that Toshiba’s little Encore weighs close to the same as Apple’s full-size iPad Air. We’ll avoid any more comparisons though as the products are obviously aimed at entirely different audiences: the iPad is the premium and intuitive easy-to-use tablet for everyone, where the Encore is the budget compromise saddled with Windows. See all Windows tablet reviews.

With still-born Windows RT for tablets now all but laid to rest, Toshiba elected to install regular Windows 8 for Intel on the Encore. Powering the Encore is a low-power Intel Atom processor, the latest quad-core version codenamed Bay Trail, with which Intel hopes to catch up with the ARM processors that have run every successful tablet and smartphone to date.

Here we have an Intel Atom processor, this time in quad-core form which certainly looks impressive on the specs list, even if it is only 1.33 GHz. Using a very low-power chip like this new Atom also means the unit can run without an annoying cooling fan, which may be a first for a Windows tablet.

Unfortunately the chip and operating system combination still feel slow as molasses, much like the netbook experience beleaguered by the same Wintel combination. The interface was often laggy and we were forced to wait long periods for some simple operations like file copying to even start. Scrolling was a hit-or-miss affair. Sometimes side scrolling worked; more often it didn’t.

The bigger problem is of course the unsuitability of managing a desktop interface from a tiny touchscreen rendered at 1280 x 800 pixels on an 8-inch screen. We tried increasing the scaling in Windows from 150 to 200 percent but that left us very little room to manouevure; and many Windows programs do not work properly with this scaling system.

There’s always the touch-bound Metro tiled interface, but the paucity of useful programs even after two years of Windows 8 means you’d still only ever buy a Windows PC to run legacy Windows programs.

The Toshiba Encore is well equipped with ports by most tablet standards, even if they’re not as useful as the maker would have you believe. The Micro-USB port is used for charging, and you’ll need to carry the charger with you since the device won’t charge by plugging into a computer or any of the usual small USB mains adaptors we tried.

You could in theory attach a keyboard and mouse to get around the awkward Windows touch interface, although every keyboard and mouse we stock in the lab is teminated with regular Type A USB plugs. Good luck finding an adaptor to the Micro-USB plug for the tablet. They do exist but you’ll need to search around.

There’s a similar story with the video output, here available on a Micro HDMI socket, although these are perhaps more common as Google Android phones tend to include this downsized connector.

The screen is not Retina-class so you will see furry text, comparable to Apple’s original iPad mini. Image quality is acceptable but colours are a little milky through the thick glass front. Touch sensitivity is mediocre, contributing to the frustration we experience trying to operate the ill-suited graphical interface. We also noticed the screen had an annoying flicker at lower brightness settings.

Overall build quality is average, with the mock-metal backplate made from textured plastic sprayed with silver paint. Fit and finish were adequate, and like most modern tablet PCs there’s no provision to get inside and upgrade components, assuming the memory and storage aren’t soldered in place anyway.

Besides a lag-free and responsive interface, one of the most important assets of a tablet PC is its battery life. Here the Toshiba Encore showed an improvement on most Windows tablets that have struggled to get beyond five hours. We measured 6 hours 51 minutes in our looped-video rundown test, playing an MPEG-4 HD film over wireless with screen set to a comfortable 120 cd/ms brightness.

The Encore’s speed as measured with PCMark 7 was poor, just 2157 points, which is disappointing for a quad-core x86 processor supported by solid-state storage. Our graphics benchmarks were a non-starter as our standard Stalker: Call of Pripyat gaming test would not run on this device.