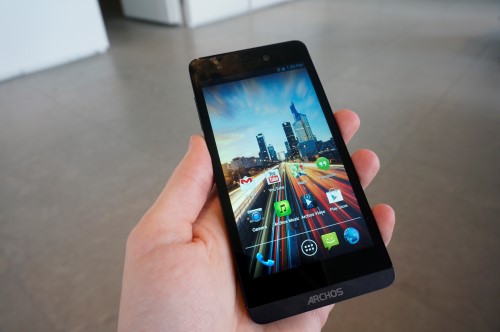 Archos is moving into home gadgets but hasn’t forgotten about smartphones. We took a look at the Helium 50 4G smartphone so here’s our hands-on review.

4G mobile networks are fully in place but if you’re stuck on 3G because you can’t afford a compatible smartphone or tariff then Archos may be able to help you with the former problem. It’s new Helium smartphones aim to bring 4G to those on a tighter budget. See also: New smartphones to expect at MWC 2014: What will Samsung, Sony, LG, HTC and Nokia launch?

To this end, the Helium 50 will be priced at around £229 and the smaller Helium 45 will come in at an even more reasonable £179. Sticking with Android, you’ll get version 4.3 Jelly Bean on either of the Helium smartphones.

Understated in design, with a similar look to the BlackBerry Z10, the Helium 50 and Helium 45 have 5in and 4.5in screen sizes respectively. A little more abnormal these days, but the navigation buttons are below the screen rather than on it.

The Helium 50 has a reasonable resolution of 720p and has an IPS panel so viewing angles are good. Inside is a 1.2 GHz Qualcomm Snapdragon 400 quad-core processor, 1GB of RAM and 8GB of internal storage. To us the phone seems very nippy on the performance front and we’re pleased to report there’s a microSD card slot for adding more storage.

Furthermore, the 8Mp rear facing camera also seems decent after a few test shots. The phone does feel a little plasticky and cheap, but that’s exactly what it is. The important thing is you get 4G support at a more than reasonable price.

It’s nice to see Archos has kept the Android interface nice and clean and the firm touts battery life of more than a day so we’re looking forward to testing that out properly.

We haven’t taken a proper look at the Helium 45 but for your money you’ll get a 480×854 resolution, 4GB of storage and a 5Mp camera. A few downgrades but you still get the Snapdragon 400 processor, 1GB of RAM, 4G support and a microSD card slot.