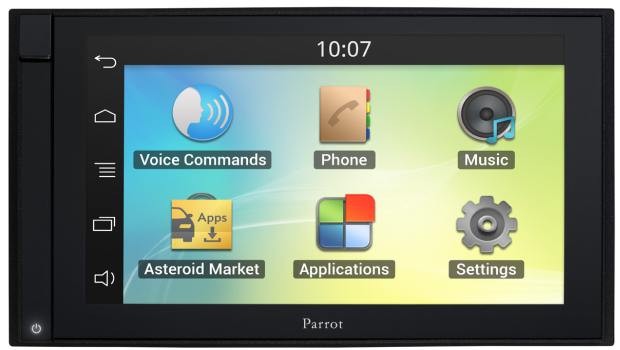 The Parrot Asteroid Smart is a decent infotainment system, but the total cost including fitting makes it expensive.

Parrot is well-known for Bluetooth hands-free kits, and the Asteroid range is really an extension of those. The Smart is the flagship model: a double-DIN headunit that replaces your existing stereo.

The 6in, 800×480 touchscreen displays a familiar Android interface, albeit one that’s tailored for in-car use with big icons and text.

Don’t expect the latest KitKat version of Android, though. The Smart runs a modified version of Gingerbread 2.3. In fact, it’s almost better to think of it as a proprietary system since there’s no access to Google Play: apps are downloaded from Parrot’s own Asteroid Market. (You can side-load apps if you’re that way inclined, but they may not work.)

There’s a decent choice of driving-related apps including Waze, Glympse, TomTom, Coyote Series, Parkopedia and more, with the majority being free. However some, including Coyote, require a yearly subscription, so using the free trial should help you work out if it’s worth shelling out for its features.

The screen is capacitive unlike many double-DIN headunits which use the older resistive technology, favoured by older standalone satnavs. It’s responsive, but the glossy finish meant we couldn’t see anything except reflections when the sun shone directly onto it – and that will happen a lot as you drive around. We also had a slight problem with condensation inside the screen, but this was visible only with the screen turned off.

The Asteroid has built-in Bluetooth and Wi-Fi and comes with a USB GPS receiver and dual-microphone for hands-free calling. To get an internet connection you can either tether a smartphone or 3G tablet, or use a USB 3G dongle.

The Asteroid Smart also has an FM/AM radio and an audio player for your music needs. There’s no CD player, but chances are that you already have your music ripped to MP3 format anyway. It’s annoying that there’s no DAB radio integrated and Parrot says there’s currently no way to add one.

We initially copied a 40GB music library to a USB flash drive, but for reasons we couldn’t fathom, the Smart refused to ‘see’ any of it. A second try of a smaller 8GB collection on a 16GB stick worked fine.

Bear in mind that the default player supports only MP3 or WMA tracks. You can play uncompressed FLAC if you install VLC. Assuming you’re happy to listen to MP3, the stock player is pretty good. The track and album names are shown with a progress bar, and you can choose whether or not to display album art.

Swiping up and down changes the volume and left or right skips tracks. If you have steering wheel controls, you can use them if you invest in the separate Unika kit, which costs about £65.

The only snag there is that the volume controls adjust only the main volume. You have to dig into the options for adjusting navigation volume and others. Plus, we’ve heard from others that the factory voice recognition button doesn’t work – on our car we were able to use the Mode button to change the audio source, but couldn’t set a button to launch voice recognition.

Another way to play music is from your smartphone. The Smart had no problem playing music from an iPhone 5C and will also charge your phone when it’s connected.

If you use Spotify or Deezer, you can use these services on the Smart, and there’s also TuneIn Radio.

It’s unlikely that you’ll use the Smart for watching videos, since like most apps, Gallery functions only when you’re stopped. Also, videos can be played only from an SD card – not USB unless you use the beta VLC app – and swapping SD cards is a tricky business since the slot is deeply recessed behind a removable panel on the left-hand side of the Smart. We resorted to a pair of tweezers to remove cards.

Plus, you’ll need to use the included 8GB SD card if you want the satnav app to work since the maps aren’t transferable to a bigger-capacity card; at least there’s roughly 5GB of free storage for any apps and videos you want to store.

Another problem with videos is that, while the Asteroid Smart supports head-rest screens via a single composite video output, you can’t play videos to entertain your kids while you’re driving. A big missed opportunity there, then.

As you’d expect, the Smart works well for hands-free phone calls. You can have two phones connected via Bluetooth simultaneously, with one set as the ‘primary’ phone. We found the mic worked well (or at least that’s what callers told us) and we could hear the other party clearly on the car’s speaker system.

The bad news is that the Asteroid works just like Parrot’s other kits and syncs your phonebook each time it starts up. Why it doesn’t store a local copy is a mystery, but it’s frustrating if you want to immediately call someone when you jump in the car.

The Smart has voice recognition, which the installer may or may not be able to trigger by a steering wheel button via the Unika kit. This worked about as well as any system we’ve tested, which is to say that it wasn’t always accurate. For the most part it called the right person, but other times it would get it spectacularly wrong and start calling someone you forgot was even in your contacts.

The pre-installed iGO satnav is pretty good, although by no means the best around. It’s easy to enter a destination as well as follow a route using the screen and spoken directions. You also get realistic junction views and lane advice on motorways.

The routes it calculated during our testing were decent, and you can configure it to plan routes that avoid motorways, tolls and other common options. By default it warns you (visually and vocally) when you exceed the speed limit: you can either increase the threshold or disable it altogether.

As standard it offers no warnings for speed or red-light cameras. Both Wikango and Coyote apps can be downloaded to do these jobs, but we’d much prefer not to pay for this information.

An email app is installed but you can also download Asteroid Mail for free from the Market. We’re not convinced about the need for an email app on a device that relies on your smartphone for an internet connection, but if you’re using a 3G dongle and don’t have a smartphone it might possibly make sense.

The same goes for the Android web browser. Chances are, your phone’s screen has a higher resolution and offers a better browsing experience than on the Asteroid.

It’s great to see Torque Pro included for a few pounds. Car geeks will love seeing a multitude of engine and other measurements that aren’t available on their standard gauges. However, you’ll need a compatible Bluetooth ODBII reader – ours didn’t work, disappointingly.

You can install the Asteroid Smart yourself, but you’ll need some competent car-stereo skills to do so. Even with the help of a professional installer, the system was left half working in our test car – a Ford Focus – after a five-hour slog.

The installer forgot to hook up a wire to the handbrake, meaning we were locked out of virtually every app as the Smart thought we were driving. The Unika kit was also a trial to install – specific instructions are needed (and not included in the box) for setting DIP switches for each vehicle and a wiring diagram showing how to connect the Unika’s sensing wires.

You’ll also need an ISO harness so you can plug the Smart into your car’s existing wiring and radio aerial, a fascia adapter and possible a double-DIN cage in which to mount the unit. For our Focus, this cost a not-insignificant £60.

The good news is that the Smart isn’t too deep so should fit in just about all cars which have space for a double-DIN stereo.

We also opted to install a reversing camera which, although a tricky job, was well worth it. When you hook up a feed from a reversing light, the Smart automatically switches to the camera feed. There’s a short delay, but the image is very helpful for tight parking spaces. On a couple of occasions the Smart declared that no reversing camera was connected, but it did work for the majority of the time.

There are four USB ports on the rear of the unit, one of which is used by the GPS receiver. Two USB extension cables are included along with a 30-pin Apple cable – all are designed to be routed into your glovebox. We plugged in a Lightning cable into the ‘iPod’ USB port and had no problems.

Should you need it, there’s also a minijack socket and cable for connecting older music players.

There are six amplifier pre-outs – front, rear and subwoofer – but we were more than happy with the built-in amp to drive our car’s eight-speaker system. There’s plenty of scope to tweak the sound with the equalizer and fade/balance controls be we found the Loudness and Soundstage options gave music all the boost they needed.

Being able to bring an older car up-to-date with an Android-based system is great, and the Smart is pretty easy and safe to use. However, it does have some drawbacks. It isn’t great for video, especially if you wanted to hook up head-rest monitors for your back-seat passengers.

It’s great to have a choice of satnav apps in the Asteroid Market, and if you can afford the extra £45, it’s well worth getting TomTom UK/Ireland. However, this leads us to price. You can pick up a Smart for around £410, but by the time you’ve also bought the Unika kit, ISO harness and fascia adaptor, the cost gets a lot closer to £550. Factor in the fitting charge and the total figure begins to get out of hand,

So is the Asteroid Smart a good buy? Yes and no. If you merely want to use it as a satnav and audio system there are cheaper options. If the connected apps tempt you, and you have a data plan that allows tethering, you’ll be able to get a lot more out of it. The absence of a DAB radio is a particular blow, however.

Some say a better option is to strap a £200 Nexus 7 to your dashboard which can stream audio to your existing Bluetooth car radio and offers a much wider choice of apps. However, from a safety point of view, this isn’t a brilliant idea and you won’t be able to hook up a reversing camera.

Parrot has released several bug-fixing firmware updates since the Smart’s launch, but chances are that a raft of new retro-fit infotainment systems will appear in 2014 from the likes of Pioneer, Alpine and others. They could be worth waiting for.