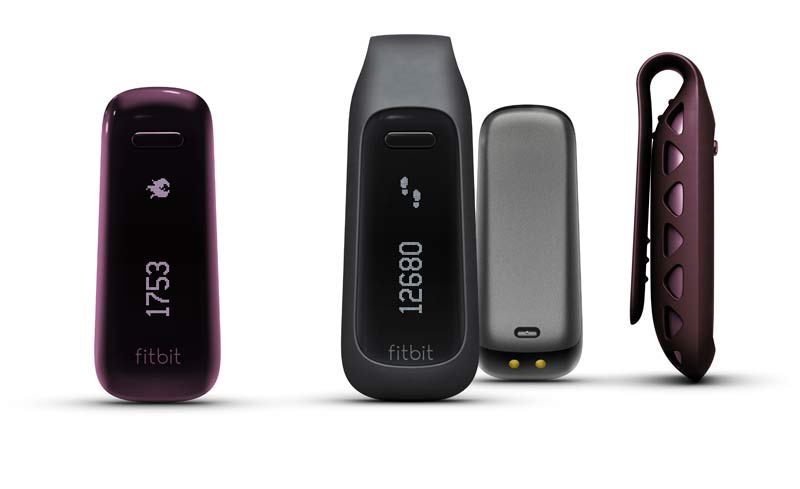 The Fitbit One is accurate, has great battery life and tracks pretty much everything you’d want it to. The proprietary charging cable is a pain, but it’s a minor quibble about what it otherwise an excellent activity tracker.

Fitbit has almost become the Hoover of fitness monitors; people have already started calling any activity tracker a Fitbit.

The popularity is important since half of the motivation to get off your bottom and do some exercise comes from competing with your friends. If you buy into a system that none of your friends use then you won’t have that weekly – or even daily – chart showing who has the most steps to their name. See all activity tracker reviews

I’ve been using a Fitbit One since it was launched in October 2012 and while it’s motivational on its own, it’s the ever-growing list of friends who have bought a Fitbit device that helps me to hit my daily step goal.

It may not be new, but the One is still one of the best fitness monitor’s I’ve tested and you can now pick one up for a little over £60, which is less than half the price of the Nike FuelBand SE.

Fitbit One review: The Good

It’s a better device, in some respects, than the Flex, which is Fitbit’s entry-level wristband. For more comparison read Which Fitbit is best.

For one thing, it can be worn pretty much anywhere you like: on your belt, clipped onto a bra or even just dropped into a pocket without the rubber case, making it ultra-discrete. 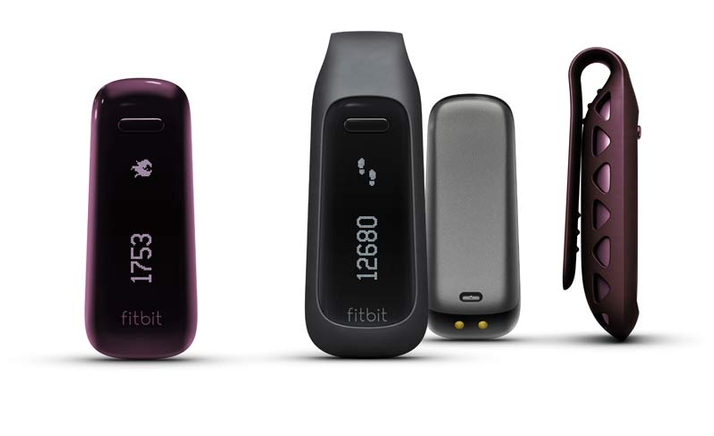 It has a handy display so you can see your progress through the day and, unlike the Flex, it has an altimeter so can measure how many flights of stairs you climb. In addition to tracking steps, it estimates your distance (based on height and steps) and calories burned (based on age, weight, height, steps and height climbed).

Via the free app, which is available for iOS and Android, or on the website, you can keep tabs on your ‘active minutes’ which is a better goal for some people than steps. You might also be interested in Fitbit’s Aria scales that sync with your account, and measure weight, body fat percentage and BMI; read our Fitbit Aria scales review.

Not everyone has the time or ability to walk 10,000 steps per day, but it’s still important to be active and the One monitors all movements – not just steps. 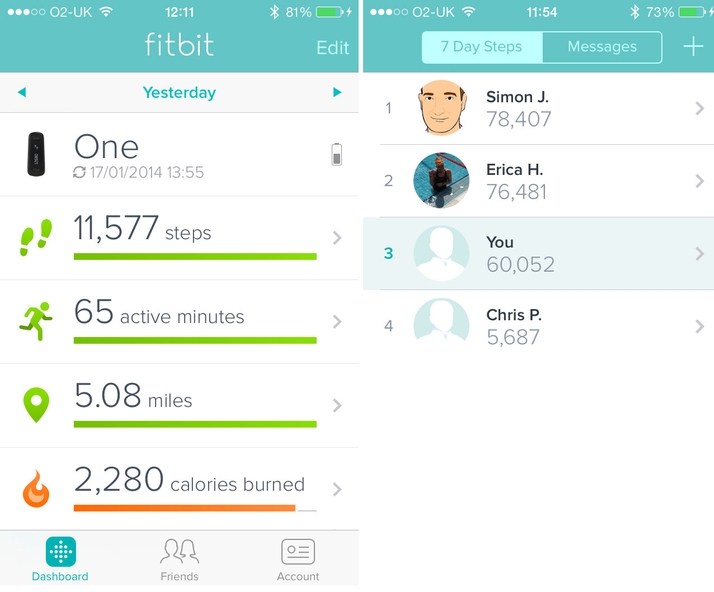 Using the included wristband you can also wear the One at night where it will monitor your sleep, telling you how long – and how well – you slept last night. For some, the information won’tt ell them anything they didn’t already know, but for others, seeing how restless they were and how alcohol or other factors, affect their sleep. 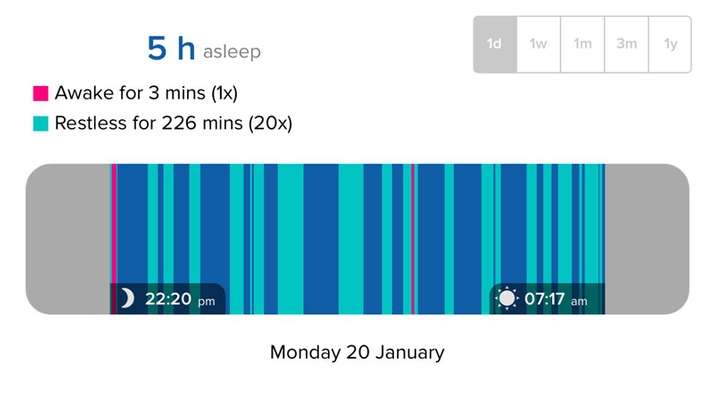 Since it has a vibrating motor, the One can work as a silent alarm to wake you in the morning. It’s nice and gentle, so it doesn’t shock you into consciousness.

Yet others features include a clock and a stopwatch. The timer is important as it lets you track sessions, something you can’t do on the Fitbit Zip or original Nike FuelBand. Afterwards, when you sync the data, you can see your pace, a graph of your speed and more. It’s ideal for runners in particular.

I’ve always found the One’s battery life to be pretty good, lasting almost a full week. A recent firmware update increased this to around 10 or 11 days, which is great. Similar to the Withings Pulse, the One goes into a low-power mode when the battery is almost empty. It won’t display anything except an empty battery icon, but it does keep tracking your movements for a day or two.

It isn’t often that I get to comment on a device’s reliability over a long period, but I’ve been impressed with the One’s ruggedness. It’s survived being rained on while out cycling, living in a pocket with keys and coins for months on end and even going in the washing machine on one forgetful occasion. Fitbit says it isn’t waterproof, but you’d never know it.

I’ve also found it to be one of the most accurate trackers I’ve tested. Unlike some wrist-worn trackers, which can vastly under- or over-estimate your step tally, the One can be trusted to tell you precisely how many steps you’ve taken. 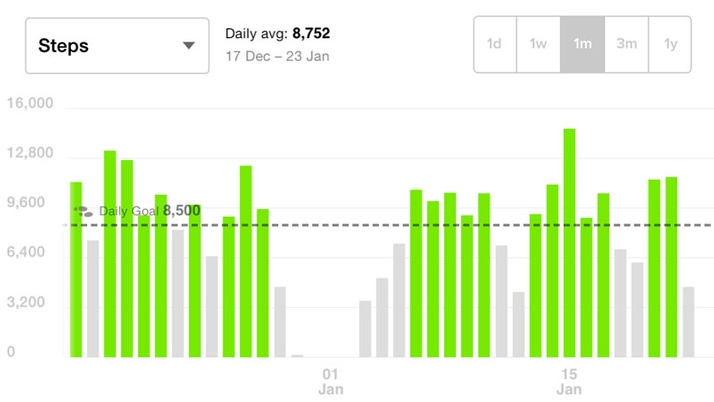 Syncing via Bluetooth has always been reliable, whether to the included dongle or to an iPhone. The recent ‘all-day’ sync option also works well, but does seem to drain my iPhone’s battery, so I stick with on-demand synching.

Fitbit One review: The Bad

However, this is partly because it isn’t a wristband. And that brings its own problems. Until you’re in the habit of swapping the One every time you change your clothes, you’ll be constantly leaving it in a pocket or clipped to a pair of trousers. It’s not a criticism of the One as such, since it’s a problem with any tracker that you can’t wear directly on your person.

Another thing I don’t like about the One is its charging dongle. Instead of having a microUSB port (like the Withings Pulse) you need a proprietary adapter, which is far too easy to lose. There’s a burgeoning market of third-party charging cables for this very reason. 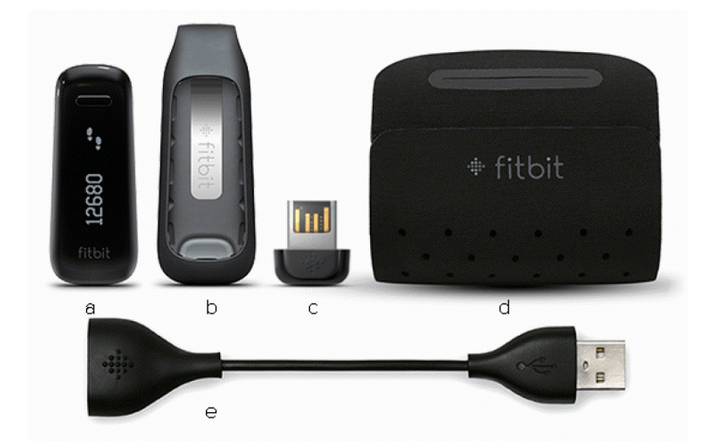 A minor quibble, which will apply only to those who like to keep their One in a pocket, is that the stopwatch is too easily activated. The button doesn’t require much pressure, so I constantly find the timer running for no reason. It doesn’t affect the daily totals, but if you did mean to track a session, you might find the timer stopped before you wanted it to.

I’m also not convinced that the recent update to sleep tracking is an improvement. Previously, I considered the monitoring to be too sensitive since the sleep graph told me I’d typically be ‘awake’ more than a dozen times per night. Now, it reports when I’m awake much more accurately, but suggests that the total time I sleep is around 4-5 hours per night, despite being in bed for around 8 hours. I still prefer Jawbone’s approach, which separates light sleep from deep sleep and gives an overall ‘sleeping’ time, as well as a percentage of your target sleeping total.

Finally, despite the vibrating motor, there’s no Jawbone-like movement reminders. I don’t personally like these as there’s little point in having a tracker buzz at me when I’m working and can’t go for a walk, but it seems odd that Fitbit didn’t add this feature for those that do want it.

If you don’t want to wear a wristband, the Fitbit One is one of the best activity trackers around. It tracks more things than most, yet isn’t overly expensive. Its battery lasts a decent length of time, and it’s compatible with a good number of smartphones and tablets. Since it comes with a USB Bluetooth dongle, you only need a laptop or PC for wireless synching, so it doesn’t rule out those without the latest smartphones.

The only real flaw is the non-standard charging cable. For the money, it offers more than many of its rivals, earning it a well-deserved Recommended award.