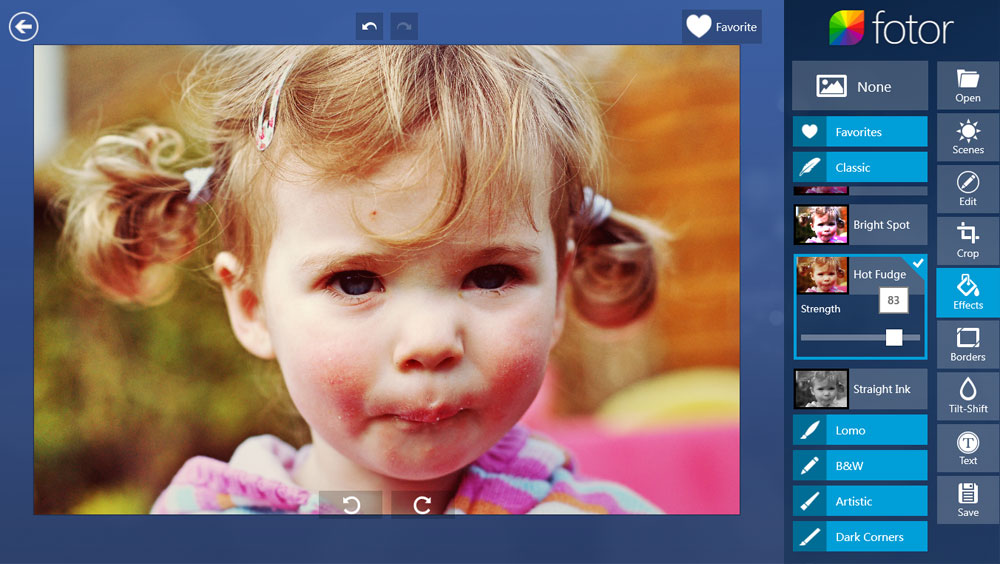 Given that it’s free, we can’t complain too much about the lack of advanced tools. It’s a huge step up from Windows 8’s woeful built-in image editor, and is still a usable app even if your laptop or PC doesn’t have a touchscreen.

Fotor is an “all-in-one” photo editing app designed for Windows 8 tablets. The interface aims to make it easy to edit your photos with a few taps and swipes, much like Google’s SnapSeed.

To the right is a series of buttons which can be considered the main menu.

You can open an image (including RAW files ), then tap the Scenes button to quickly alter your photo with either the 1-Tap Enhance or a variety of ‘scene’ presets such as sand/snow, night and other lighting conditions.

Next is the Edit button which provides a range of basic adjustments such as brightness, contrast, saturation and colour temperature. Other sliders let you add a vignette or sharpen the photo. Above your image are arrows that let you undo and redo changes.

Within the Crop menu you can straighten your photo, crop freehand or choose from a selection of common aspect ratios.

Effects is similar to Scenes, but offers a more Instagram-like selection of filters to give your photo a retro look or another style. There are loads to choose between, but oddly no pseudo-HDR preset.

It’s just as easy to add a border to your photo although, as with other editors, the frame is applied within the limits of the photo instead of adding to its size. We’d prefer the option to choose between these approaches, as your preferred frame might obscure some details you’d prefer to keep in your image.

A nice touch is the inclusion of a tilt-shift effect, which can make your subject look like a miniature scene. You can choose the aperture size and radius. If you want a straight blur rather than radial, you can tap on the image and rotate and move the lines to match the foreground and background in the image.

On the odd occasion when you want to add text to an image, that’s simple too. As well as picking the font you can increase character spacing, rotation and transparency.

There’s also the option of a stroke in a different colour, but no way to change its thickness. There’s no colour picker, so you can’t match the text to a particular colour in your photo.

There are other limitations compared to a traditional photo editing application. You can only make full-image adjustments, so there’s no way to increase brightness in a particular area for example. That’s something you can do with Snapseed. Also, there’s no red-eye removal.

Don’t expect any advanced features such as layers or curves: if you want to do any complex edits, you’ll need to resort to Photoshop or similar. At least you can resize an image when saving it, so if you need it to be 1000 pixels wide, that’s no problem. There’s also a collage mode where you can arrange up to 9 images to either print or share.