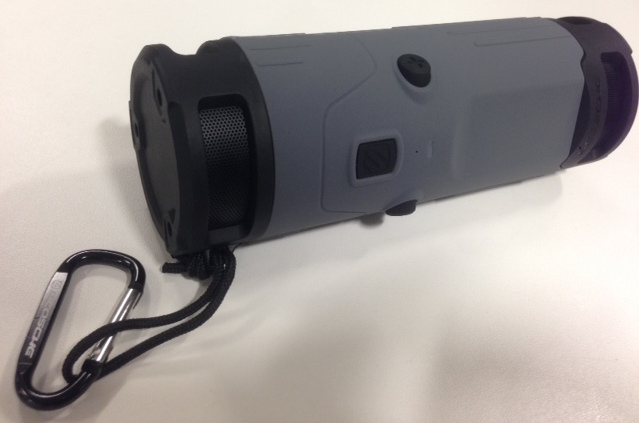 Reasonably priced and well built. If you don’t expect awesome audio this portable speaker set will serve you well. The Scosche BoomBOTTLE is ideal for active types who like to make noise when out and about in the great outdoors.

It’s the obvious question: why would you build and sell a portable speaker that looks like a drinks bottle? The literal answer has some merit: Scosche correctly identifies that cycling with music is fun, but cycling with headphones is dangerous. Thus by placing the Scosche BoomBOTTLE in your bike’s drinks holder you can enjoy banging tunes without cutting yourself off from the dangers of the road.

It sort of makes sense although when we tried it on our own suburban street we found that in order to have the music loud enough to hear it we had to treat our neighbours to a selection of our favourite songs. (At best I felt like an ice cream van announcing my presence as I wobbled down the road. At worst like the kid who used to park his Ford Escort outside my school in the hope of attracting girls much too young for him.)

There are some other benefits to the Scosche BoomBOTTLE’s odd shape, fortunately. On the one hand the water bottle shape fits in nicely in other outdoors situations. And the robust build is particularly welcome when you are shelling out a hundred knicker for a portable device. 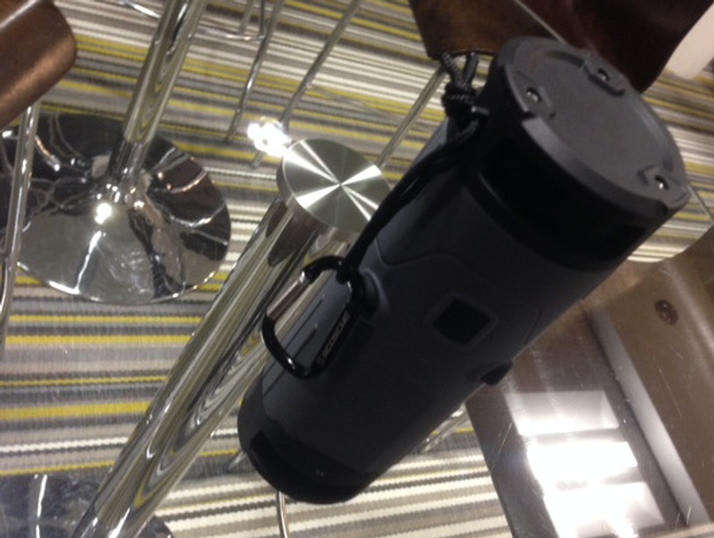 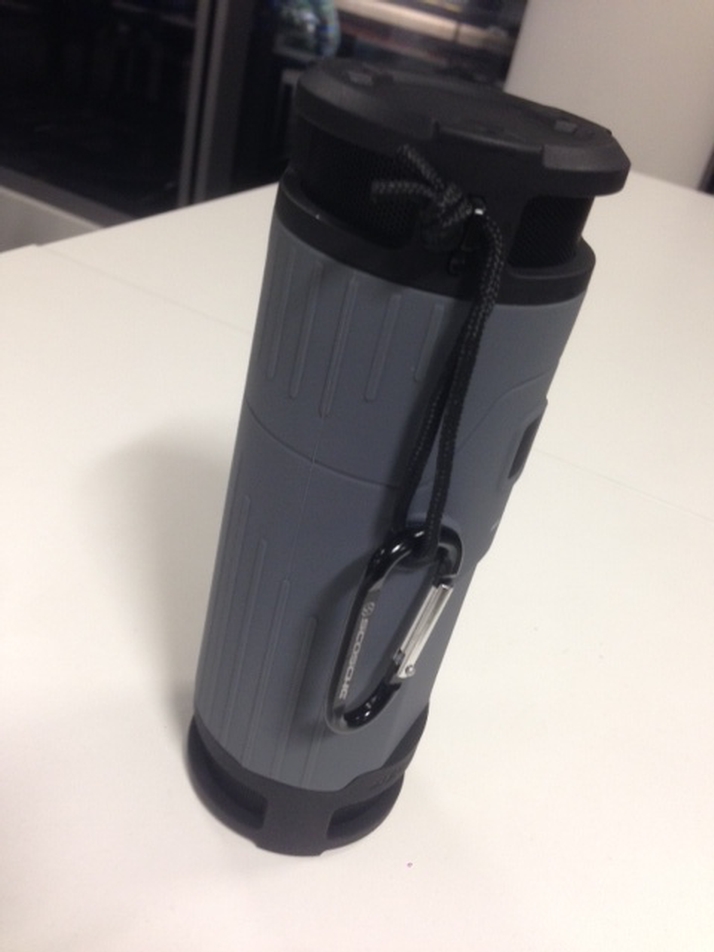 A chunky silicon-covered cylindar roughly 70mm across and 205mm long, the Scosche BoomBOTTLE was mistaken for a drinks bottle by a colleague. The one we tested was mostly grey with black styling at the outer edges. It is surprisingly light at just 443g.

A product designed to fit into a bike’s water bottle carrier – it does so perfectly snugly – this makes it awkward to carry in a pocket, but less so than most speakers of comparable size/volume. And it fits perfectly into the side pockets of rucksacks. Alternatively, when out and about you can hang it off your bag via the supplied karabiner. The karabiner is in turn useful in all sorts of situations: you could hang the speaker from the top of your tent and entertain and annoy your fellow campers, for instance.

The Scosche BoomBOTTLE is certainly robust and rugged. Silicone covers protect the volume controls and multifunction button, while a flap at the rear protects the USB charging port and 3.5mm stereo input for connecting non-Bluetooth sources. It’s a speaker set that is difficult to break, albeit not the easiest to use in the dark.

The speaker drivers are themselves protected by dust-proof covers, positioned at either end of the tubular Scosche BoomBOTTLE. This means the Scosche BoomBOTTLE works when both positioned upright and placed longways flat to the floor. Stand it upright on its end and it is plenty stable enough to use without it falling over.

Oh, and the Scosche BoomBOTTLE is splash proof. You won’t want to take it into the pool with you, but it can sit around poolside without suffering any mishaps. Overall the design is far from beautiful, but it has a certain rough-and-ready charm. More importantly it is well built and hard to bust.

The Scosche BoomBOTTLE comprises two 3W 40mm speakers. There’s no subwoofer, as you might expect with a device this size and shape. It’s a small stereo speaker designed to be heard on your bike. To connect via Bluetooth the BoomBOTTLE uses standard SBC audio codec rather than the higher-quality aptX.

Thus audio quality is as good as it ought to be: good enough but no better than that. The volume is certainly decent for a portable speaker. Listening to rock and pop you get strong mid range, albeit with little detail. there’s not much detail at all at high frequencies, and not much bass to speak off. It’s there, but don’t expect to be blown away.

Overall we were neither delighted nor disappointed with the Scosche BoomBOTTLE’s audio performance. It is what it is – a decent portable speaker with decent audio. It’s for noise on the move or when on your travels, rather than for perfect audio at home.

Battery life is claimed at ‘up to 10 hour’s. We have no reason to doubt this as we played music over Bluetooth for around four hours and it was still going strong.

The Scosche BoomBOTTLE isn’t a cheap option, nor is it prohibitively expensive. We recently reviewed the similarly robust second-generation Jabra Solemate that retails for roughly the same price, and preferred the audio quality of that speaker. But the BoomBOTTLE offers more specialised design and is easier to carry when cycling, walking, camping and so on. It’s a good, if niche, product. See all speaker reviews.