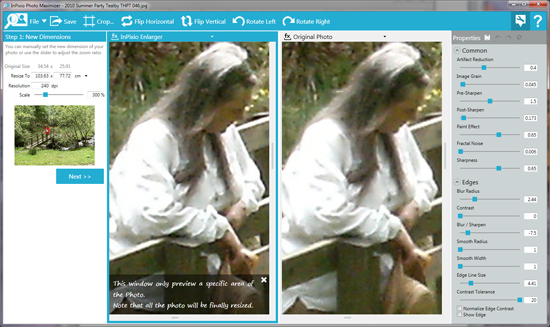 InPixio Photo Maximizer does its job really well and if it were a £30 utility, we would probably recommend it. At £120, though, it looks very expensive, particularly when there’s an open-source alternative, using the same enlargement algorithm, which you can have for nothing.

InPixio Photo Maximizer, published by Avanquest, aims to cure a particular problem of digital photographs, when you try and enlarge them – pixellation. See all software reviews.

This happens when there isn’t enough information in the original image to prevent the image breaking up into its component parts of visible, square pixels.

There are two main reasons why you might want to enlarge a digital image by a large amount: to create a poster out of a photo, or to take a detail out of an image to blow up into a picture of its own. InPixio Photo Maximizer uses a sophisticated algorithm to guestimate the contents of these pixels and break them down to look more like a regular image.

The program could hardly be easier to use: load an image, select the size to enlarge it too and its resolution, and the software shows the original and the treated image side by side – although oddly with the ‘After’ on the left and the ‘Before’ on the right.

Using default settings, you can see at a glance that pixellation is much reduced. This is particularly noticeable around clean-cut edges of objects, but the entire image is depixellated. You can view a particular part of the photo using a small marquee on a thumbnail to the left, but the whole image, not just the marked area, is enlarged.

You don’t have to take the default settings, as there are a lot of control parameters available as sliders to the right of the After and Before panels. It’s easy to see why most of these would affect the result: sharpening, grain, blur, fractal noise and contrast can all help. But without much guidance on how to apply them, it’s down to trial and error. If you find a set that work well, you can save them as a preset, to apply elsewhere.

What the utility can’t do is to introduce more detail into an image. It can smooth and interpolate the pixels it thinks should be there, but this blends pixels only. Even so, the result is invariably better than an enlarged image to which it hasn’t been applied. It’s also gives a more convincing and realistic image than using the smoothing and blur filters of the main graphic editors.

There’s not much else this utility can do. You can crop and rotate an image, but it’s a tool for a specific function, not an app in itself. It might work better as a plug-in for Photoshop or PhotoPaint.

However, the main fly in the ointment, as far as InPixio Photo Maximizer is concerned, is that the enlargement algorithm, created by Mischa Lusteck, is already available in a utility called SmillaEnlarger (sourceforge.net/projects/imageenlarger/) – and that one’s free.

The OpenSource program does much of what this program does, although in an even less intuitive and less good-looking way, without costing a penny.

You might not begrudge the asking price, as the program is much easier to navigate than SmillaEnlarger, if it were reasonable, say £30. However, Avanquest actually wants £120 for it, which for a single-function utility, even a clever one, looks over the top.