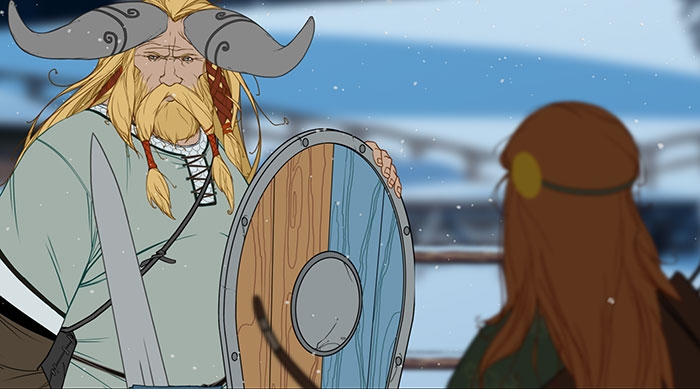 The Banner Saga is a remarkably beautiful and constantly surprising roleplaying adventure game, let down only slightly by repetitive and overly-slow turn-based battles.

Here’s an early candidate for best-looking game of 2014. The Banner Saga’s animation-like graphics look like nothing else, both when they’re showing vast, sweeping scenery on a scale that would make Peter Jackson have a tantrum and when they’re showing massive, characterful faces that speak of terrible wars and ancient sadness.

This roleplaying/strategy hybrid is set in a Viking-inspired world where humans and giants grudgingly work and live together in an attempt to survive the twin horrors of an extinguished sun and a demonic army made from stone. An elaborate but impressively restrained plot switches between a large cast of characters, any of whom can die or depart at any point.

Between that and the constant threat of an impossibly hard Winter, The Banner Saga often seems like a more artful Game of Thrones. Only here it’s you making the decisions that can lead to unexpected tragedy, in a consequence-loaded conversation system akin to the Mass Effect games but much trickier to predict. There’s a constant tension between trying to do the right thing, make the choices that will keep the most people alive and try to deter in-fighting, and doing the practical thing.

For instance, taking on a band of survivors as your swelling party of humans and giants stomps exhaustedly across the icy landscape might sound like a noble act, but what it also means is more mouths to feed from your ever-dwindling food supplies. If the food runs out, many will die. So what’s the right thing?

Sometimes choices are a matter of conscience, other times the game can see extremely arbitrary, and the slew of terrible outcomes to attempts to be co-operative and considerate becomes exhausting. That’s more a warning than a complaint – The Banner Saga is trying to create a mood of desperation and constant peril, so don’t sign up thinking that lavish, cartoon art style means all smiles and giggles.

Between the dilemmas and the vistas are relatively simplistic, somewhat repetitive but reliably challenging turn-based strategy battles. These involve picking a squad from a regularly changing (because people keep dying) roster of heroes and engaging them in small, tile-based skirmishes against the various creatures of this dying world, some of which require surprisingly elaborate strategies to take down. Heroes will also level up over time and can equip special items, which makes it all the most painful when you lose one to an unexpected plot twist.

It’s a decent enough way of including action and more visible threat, and the careful nature of it offers a welcome chance to feel more in control compared to the dizzying, unpredictable onslaught of the story and its dilemmas. Even so, these battles are the weaker part of the game. There are too few enemy types, and the ones there are take forever to take down, so come the second half of the game these battles can feel like a faintly tiresome and long-winded interruption from the increasingly engrossing plot and moral dilemmas. 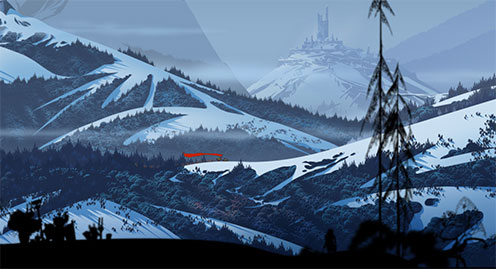 It’s also a shame that these battles typically involve less than a dozen fighters, given your heroes are supposed to be at the head of a thousand-strong army. The dialogue often speaks of near-apocalyptic battles and the destruction of entire cities, but all we really get to see of it is a few guys very slowly hitting each other.

An uneven experience then, but the frankly astonishing scenery and a plot that starts confusing but becomes increasingly powerful makes The Banner Saga absolutely worth the bumpy ride. Oh, and it also offers plenty of memorably grumpy giants.