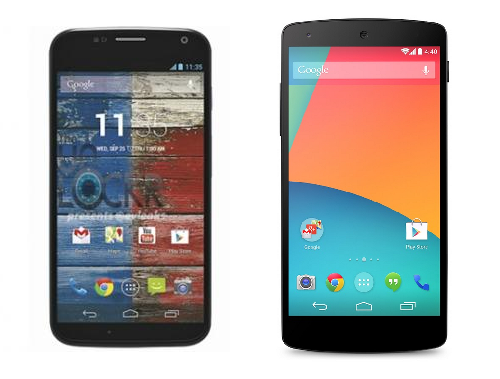 Considering the specification which you get with the Nexus 5 and the fact it costs less than the Nexus 5, it wins over the Moto X for us.

Google’s  Nexus 5 smartphone has been very popular since launch and after a number of months on sale in the US Google-owned Motorola has decided to bring the Moto X to the UK. See how these to mid-range priced  smartphones compare to each other in our Nexus 5 vs Moto X comparison review.

If you can’t afford smartphones like the HTC One, Sony Xperia Z1 or Nokia Lumia 1520 then the Nexus 5 and Moto X are two great alternatives. The devices have decent spec but without a premium price tag.

The Moto X has made its way over to UK shores with a SIM-free price of £350. This means it costs a fair few quid more than the Nexus 5 which starts costs £299 for the equivalent model – an outrageously low price for a flagship smartphone.

With the Moto X coming into the UK market at a higher price than the Nexus 5, does it stand any chance? Read on to find out.

With a slightly bigger screen and a higher resolution, things are looking a bit better if you opt for the Nexus 5. Its got a 4.95in screen with a Full HD 1080 x 1920 resolution. The Moto X’s display is only slightly smaller at 4.7in which isn’t a big deal but at 720p there’s less detail on offers. It’s 312ppi vs 445ppi in the pixel density stakes.

Moving onto internal components and the Nexus 5 is on top in the power battle with a Qualcomm Snapdragon 800 a 2.3 GHz quad-core processor with 2GB of RAM. That’s a set-up found in much more expensive flagship smartphones.

The Moto X is equipped with a 1.7GHz Qualcomm Snapdragon S4 Pro dual-core processor, also with 2GB of RAM.

Things are a dead heat on the storage front since both the Nexus 5 and Moto X are devoid of a microSD card slot and both come in 16- and 32GB storage options (The 32GB edition of the Moto X isn’t available in the UK). Just make sure you pick which size carefully.

Motorola gets one back with its 10Mp camera which outpaces the Nexus 5’s 8Mp camera – on paper at least. Both have HDR modes and can shoot at up to 1080p video, though.

Both front facing cameras can take Full HD video, too, but the Moto X is able to offer more pixels for still photography at 2Mp against the Nexus 5’s 1.3Mp.

Things are on a similar level in the connectivity category with each smartphone offering dual-band Wi-Fi with the latest 11.ac standard, Bluetooth 4.0 LE, GPS, NFC and support for 4G LTE mobile networks. The main difference is that the Nexus 5 also includes wireless charging.

Software is an area in which the Nexus 5 and Moto X only differ slightly. The Nexus 5 has Google’s vanilla Android 4.4 KitKat which has an exclusive launcher with Google Now is one swipe away from the main homescreen and other features include a full-screen mode for apps and artwork.

Meanwhile, the Moto X has Android 4.2 Jelly Bean (upgradable to KitKat) with a few tricks of its own. Active display feeds information onto the screen in a discrete way while Quick capture means you can launch the camera by twisting your wrist twice and voice recognition can learn your own voice.

Beyond the handful of exclusive features, the Nexus 5 and Moto X both offer a pure Android experience.