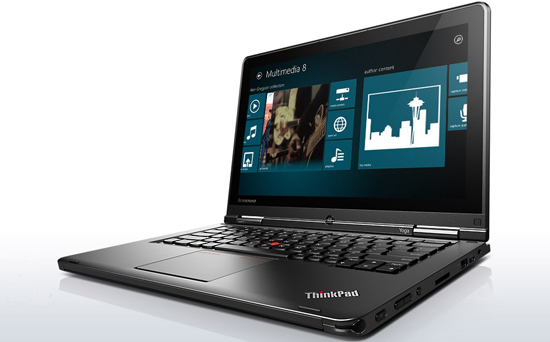 ThinkPad Yoga is a well-designed and versatile convertible device, with a high-quality IPS display that will particularly appeal to business travelers who need to give presentations when they’re visiting clients. However, the use of a sluggish hard drive is disappointing in a laptop costing the best part of £1000.00, especially when compared to SSD-equipped models from Lenovo such as the 13-inch Yoga 2 Pro.

Lenovo’s Yoga laptops have proved to be among the more popular convertible devices that can function as both a laptop and a tablet, and the company has now added a Yoga model to its ThinkPad range of business laptops. See all high-end laptops reviews.

At first glance the ThinkPad Yoga simply looks like a fairly conventional laptop. It measures just 19.4mm thick, and weighs 1.6Kg, so it’s very much in Ultrabook territory. It’s well built, though, with a 12.5-inch screen panel that feels firm enough to provide protection, but also flexible enough to absorb the occasional bump when you’re on the move.

The solidly-built keyboard uses Lenovo’s distinctive ‘accutype’ design, with moulded keys that are comfortable to use for long periods. The trackpad is a little small, but there’s also a pointer located on the keyboard so you can use that if you prefer.

And, like its 11-inch and 13-inch counterparts, the ThinkPad Yoga also allows you to fold the screen right back so that the laptop stands up on its own – like a tent making an upright ‘A’ shape – or fold it all the way back so that it lies flat over the keyboard and turns the entire unit into a large tablet.

This flexible design will have obvious appeal for business users who need to give presentations when they’re travelling. The screen is ideally suited for presentations too, thanks to the use of a bright, colourful IPS panel that provides 1920×1080 resolution and excellent all-round viewing angles. Lenovo also pays good attention to detail, adding an anti-glare matte finish to the screen to ensure maximum visibility and including an app called Transitions that automatically switches programs such as PowerPoint or the Windows Media Player into full screen mode whenever you fold the Yoga into its tent or tablet modes.

Our only minor complaint here is that the Yoga’s speakers produce a rather thin sound with only modest volume levels. They’ll be adequate for giving a presentation to someone sitting at a table with you, but you’ll need to plug in external speakers for presenting to a larger audience, or headphones for listening to music.

The ThinkPad Yoga is a little less expensive than models such as the recently released Yoga 2 Pro, but mainly because it – rather oddly – uses a conventional 5400rpm hard drive rather than the solid-state storage that is more common in convertible devices such as this.

There are a number of configurations available for the ThinkPad Yoga, with prices starting at £779.99 for a model with a Haswell i3 processor and 1366×768 display, but we reviewed one of the mid-range models that costs £995.99 with Windows 8.1 Pro, full HD display, Haswell i5 running at 1.6GHz (2.6GHz Turbo), 8GB memory and 500GB hard disk. If you don’t need Windows 8.1 Pro then you can save yourself £66.00 by opting for the standard edition instead.

Our review unit also included a 16GB solid-state ‘micro-drive’. We have seen a number of laptops with hybrid drives that use small SSD modules to enhance the performance of conventional hard drives but, unfortunately, that didn’t seem to be the case here. Running the PCMark 7 benchmark produced a rather disappointing score of just 2064, which very much reflects the sluggish performance of that 5400rpm hard drive. We also noticed that the ThinkPad Yoga could be slow to boot, taking a full 40 seconds to cold-boot into the Windows 8 Start screen, followed by a further 20 seconds of cursor-spinning before the laptop was fully ready to get to work.

But, to be fair, after that slow start the ThinkPad Yoga did feel perfectly smooth and responsive, reacting quickly to the touch-screen controls, and feeling more than fast enough to cope with web browsing and running MS Office apps. It can even handle a spot of off-duty gaming action, too. Running our Stalker test at 1920×1080 resolution only produced a speed of 16fps, but lowering the resolution to 1280×720 allowed it to hit a perfectly playable 31fps.

Battery life is respectable but not outstanding. We managed to get 6.25 hours (375 mins) of streaming video from the BBC iPlayer, so less intensive use should allow you to stretch that to Lenovo’s quoted figure of seven hours. That’s close to a full day’s work, but still far less than some Haswell-equipped rivals such as Apple’s latest MacBook Air.

Connectivity is a bit limited too, consisting of just two USB 3.0 ports, mini-HDMI and headphone socket. However, Lenovo does sell a docking station for the ThinkPad Yoga, which costs £96.00 and provides additional USB ports, as well as DVI and VGA connectors and Gigabit Ethernet for a wired office network.