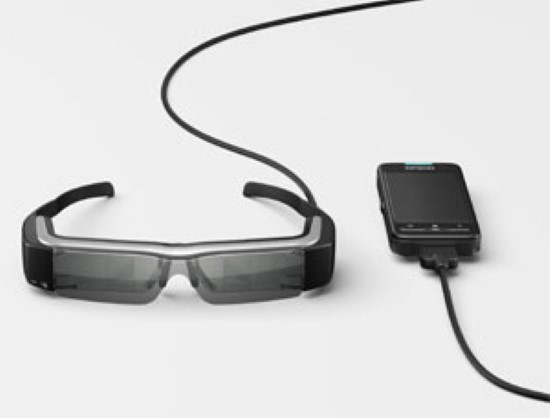 The Epson Moverio BT-200 are a great piece of technology that offers you away to watch movies and play games from a pair of glasses. The technology and design that has gone into this product is incredible, but we are doubtful as to whether there is any real appetite for this sort of product right now.

The first thing that needs to be said about the £649 Epson Moverio BT-200 (available in May) is that they are not trying to be Google Glass. They are about as different as Android smart glasses could possibly be. Whereas Google Glass is designed to be sleek and pretty hidden, the Moverio BT-200 comparatively is big, chunky and in your face. While the BT-200 weighs only 88g and are significantly smaller than its predecessor the BT-100, they are still not smaller enough to be described as natural feeling.

The Espon Moverio BT-200 works by showing you two tiny screens that are located in the middle of the lenses with a pixel resolution of 960 x 540. The screen size can equates to watching a 380-inch 16:9 screen, and can work in 2D and 3D modes. The screen itself is transparent, so you can technically use this while walking around and still see where you are going. It somehow manages to do this while keeping a vivid and sharp picture in front of you.

Theses smart glasses run Android 4.0.4 with the ability to download apps from the Epson store, and can be controlled mainly by an accompanying hand-held touchpad that is connected to glasses via a cable. Using the touchpad was trickier than we thought it would be – it’s not perfect in how responsive to the touch it is and requires a lot of guess work as to where you are tapping on the screen – this is something that we imagine you get used to over time.

Epson report that the Moverio BT-200 has a battery life of up to six hours, which isn’t exactly great, but is acceptable given that it’s a relatively new product and industry.

The device itself is crammed with tech, featuring a 1.2 GHz dual core processor; 1GB RAM; 8GB internal memory, with the ability to add up to 32GB of additional memory with an SD card; a front-facing camera; gyroscope; GPS system; compass and accelerometer. These glasses can also can with other gadgets using Bluetooth 3.0 and stream content to screen using DNLA and Miracast.

When trying out these glasses we played a low-graphics Alien shooting game that worked with the Epson Moverio BT-200’s movement sensors allowing you to control where you looked in the game by simply turning your head. While this was cool, it wasn’t quite as responsive or accurate as you might up, resulting in a very strained next to look up at the aliens attacking from the sky – the prospect of playing games on these glasses is appealing though. We also watched a scene from a Tom Cruise action film I have since forgotten the name of, and were impressed with the picture quality and detail.

At £649 these glasses aren’t cheap, which begs the question: are they worth the money? To be brutally honest, we would suggest that they are not. They’re nice and quirky and actually work pretty well, but it’s difficult to think of a situation where you would actually wear these glasses other than on public transport. That said, they are an impressive gadget that certinaly deserve credit for design and innovation.